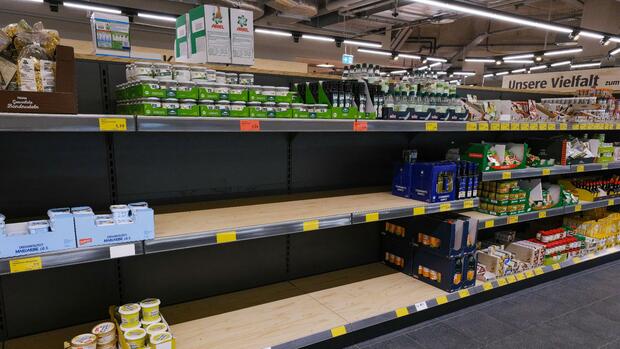 Sedan According to retail industry estimates, food prices in Germany are likely to continue to rise significantly, and at Aldi this will be felt on Monday. Even before the outbreak of the Ukraine war, retail prices “across the entire product range” had risen by five percent, said Josef Sanktjohanser, president of the German Retail Association (HDE), the “Neue Osnabrücker Zeitung”. This was the result of rising energy costs. “The second wave of price increases is coming, and it will certainly be double-digit,” Sanktjohanser said.

The first retail chains have already started raising prices. “Soon we will be able to see this on price tags in all supermarkets.” “For the time being, there will be no more sustained downward price movements,” Sanktjohanser said. Retail chains such as Aldi, Edeka and Globus had recently announced price increases.

Aldi gets serious again on Monday: Meat, sausages and butter will be “significantly more expensive”, as Aldi-Nord communications manager Florian Scholbeck told dpa in Essen. The reason for this is the higher prices Aldi has to pay its suppliers.

“Since the start of the Ukraine war, there have been jumps in purchase prices that we have never experienced before.” This is also due to the fact that feed, fertilizer and energy have become more expensive. This, in turn, would be felt by farmers in their livestock and in the meat industry. The “Westdeutsche Allgemeine Zeitung” had previously reported on the price increases.

According to the newspaper, Aldi Süd also feels compelled to raise prices. Increments vary by product.

>> Read also: These products are more expensive and scarce in the supermarket

Aldi had already raised prices on around 160 items two weeks ago, and a week later another 20 items became more expensive. The competitors followed his example.

The retail giant Rewe with its discount affiliate Penny also wants to demand higher selling prices for product groups and individual items. “We are currently facing a lot of rising costs for raw materials, energy and logistics, as well as price increases from the food industry and suppliers,” said a spokesman for the Rewe Group company, explaining the announced increases.

Rewe’s spokesman stressed that selling prices would only be raised where there was really “high cost pressure”. “We will continue not to accept demands for price increases from manufacturers and suppliers that are not justified by cost increases,” he promised. “Because we also see it as our job as a retailer to stop price gouging in the interest of our customers.”

Due to the situation in the world markets, “the increase in sales prices throughout the industry […] don’t always avoid it,” retail giant Edeka said last week. According to a recently published survey by the Ifo Institute, almost all German food retailers are planning price increases.

From the point of view of the farmers’ association, the announced price increases for food in retail are a necessary and logical step. “Now it is also important that the money does not get stuck in the marketing and processing chain, but also reaches the companies,” General Secretary Bernhard Krüsken said on Friday. The adjustments planned by the Aldi discount store are a sign of delay. They reflected not only market distortions and cost increases in production, but also the upfront costs of transforming the industry towards more sustainable production.

Farmer chairman Joachim Rukwied warned that the food supply was secure for the foreseeable future for a year. “But beyond that time horizon, it’s hard to forecast.”

At the level of the Central Trade-Agriculture Coordination (ZKHL), the central trade and agricultural industry associations exchange views on the consequences of the war in Ukraine. ZKHL Managing Director Hermann-Josef Nienhoff said that the current wave of price increases has yet to reach consumers. The ZKHL was born after persistent protests from the agricultural sector against the price policy of trade groups.

Plus: Sales of cooking oil and flour have increased considerably since the beginning of the war.