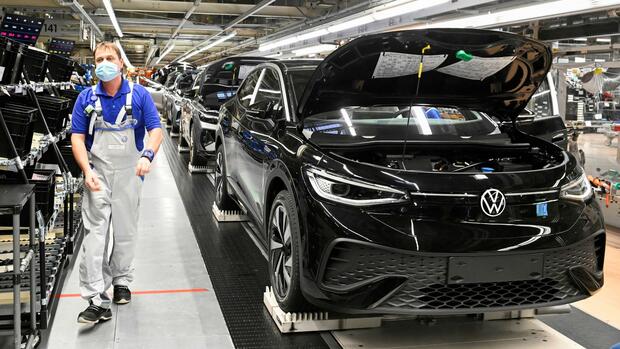 Dusseldorf The Volkswagen Group is benefiting from the valuation effects of its own commodity hedging transactions and is therefore able to report a significantly higher operating profit for the first quarter.

As the Wolfsburg-based carmaker announced on Thursday, operating profit rose from €4.8 billion in the same period last year to €8.5 billion in the first three months. The return on sales increased from 7.7 to 13.5 percent.

The valuation effect of the commodity hedging transactions (“hedging”) amounts to about 3.5 billion euros, a company spokesman said. With these hedging operations, the Group avoids large price jumps in the purchase of important raw materials such as steel or nickel.

With this long-term hedge through financial instruments, Volkswagen is paying raw material prices at the level they were before the start of the Ukraine war. The difference from the current price level is responsible for accounting profits now reported in the billions. The additional income is not actual cash and therefore is not reflected in cash flow.

Volkswagen: Accounting earnings do not lead to a jump in shares

Investors and financial investors evaluate companies according to their performance in the actual operating business. Therefore, Volkswagen’s high billion-dollar accounting profit did not lead to a special stock reaction. On the contrary: in the morning, VW preferred shares were even among the losers in the Frankfurt Dax stock index. Volkswagen’s stock was down a good one percent.

Philippe Houchois, an auto analyst at investment house Jefferies, described the operating result without hedging as “solid”. With an actual operating profit of €5 billion, the VW Group is slightly above analysts’ expectations, which were around €4.7 billion on average.

Houchois described the €1.5bn cash flow as “relatively weak”. This was also to be expected due to ongoing production shutdowns and recurring delivery problems with supplier parts, exacerbated by the war in Ukraine. Since Volkswagen has sold fewer cars, less money ends up in the till.

At the beginning of the year, the VW Group suffered the expected drop in sales. In March, 655,800 vehicles were delivered worldwide, a decrease of 31.4% compared to the previous year. Deliveries fell 23.7 percent in Western Europe and 30.4 percent in North America.

In the first quarter, a total of almost 1.9 million vehicles were brought to customers, a significant drop of 21.9 percent. Premium brands were also hit hardest by first-time sales problems. At Porsche alone, sales figures fell five percent in the first quarter compared to a year earlier.

>>Read here: Why the VW Group makes fewer company cars available to its own employees

The VW Group remains very cautious about its outlook for the rest of the year. This is due to the war in Ukraine and ongoing semiconductor delivery problems.

The new Covid restrictions in China are also difficult to calculate. Therefore, the VW Group has had to stop production at several Chinese plants. The People’s Republic is the single most important market for the Wolfsburg automobile group; VW sells nearly 40 percent of its cars there.

The war in Ukraine creates great uncertainty: a ray of hope through electric cars

There is still a risk that new developments in the Ukraine war will have a negative impact on the Volkswagen Group’s business activities, the company added. A further tightening of the supply of supplier parts and raw materials cannot be ruled out. The development of commodity markets could generate new and strong effects on the valuation of own hedging transactions. The semiconductor supply situation remains tense.

The business of new electric cars has been positive at Volkswagen. The VW Group has increased the number of fully electric vehicles delivered by 65 percent compared to the same quarter of the previous year. Despite bottlenecks in the supply of semiconductors and wiring harnesses, 99,100 purely electric cars were delivered to customers at the end of March, after 60,000 in the first three months of the previous year.

Volkswagen achieved the largest increase in China, where 28,800 customers received an all-electric model from a VW Group brand. That was more than four times more than in the same period last year.

Plus: Hans Michel Piëch and Wolfgang Porsche want to be back on the Porsche Supervisory Board.