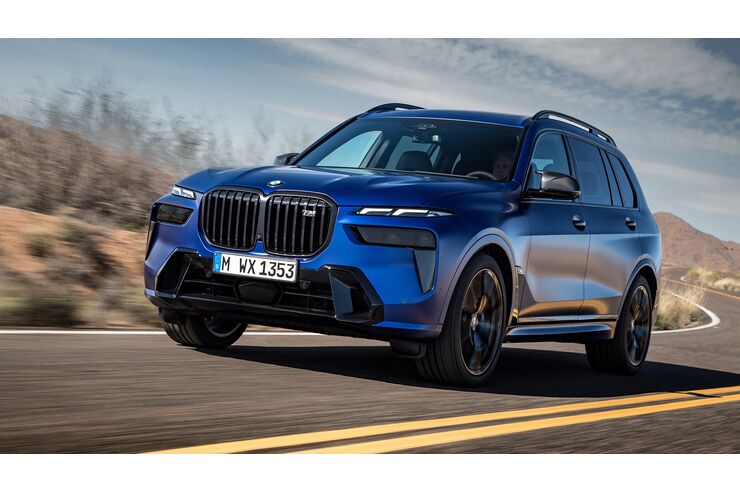 BMW is treating its flagship SUV to an extensive facelift. In addition to the heavily modified look, there’s also plenty of new inside the 5.15-meter behemoth.


The BMW X7 has been the spearhead of the Bavarian SUV range for three years. Now, just in time for the midpoint of the model cycle, there’s a facelift that truly deserves the name. Because the changes go far beyond the usual light makeup on aprons and grill. The large SUV borrows some design cues from the future 7 Series, which also more clearly distinguishes it from the smaller X5.

This is clear from the front view with the “tightened” daytime running lights, which give it a slightly more somber look. Separate from the clustered daytime running lights/indicators above, the main headlights are clustered in a separate housing below and are barely visible during the day. Lighting technology is based on adaptive matrix LEDs as standard on all models. 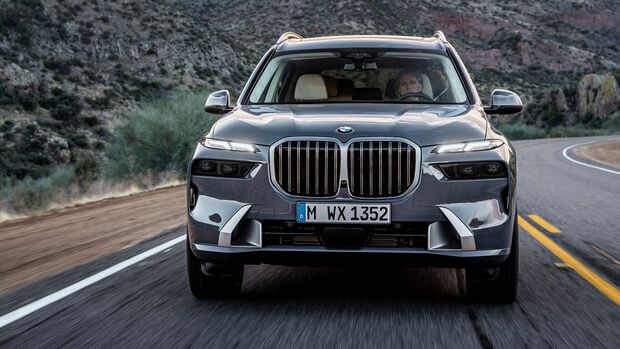 The new look of the BMW X7 with its gloomy “face” ensures a lot of prestige when overtaking.

Of course, the complete front apron is also new, not only in the headlight area. Sharper edges and smaller openings at the front of the wheels make the front end look less jagged and give it a more tech look. This also applies to the new radiator grille, which still has seven struts per segment, but appears flatter and is no longer as three-dimensional as before. What’s new is “Iconic Glow” LED lighting for the grille, which will cost extra except for the X7 M60i xDrive (standard there).

At the rear, however, the modifications are limited, whereby the skirt with the visually indicated underride guard and the flush, angular tailpipes are shaped identically to the predecessor. The fact that the facelift is immediately recognizable is due to the newly designed lights. While the taillights of the previous X7 were still relatively flat, the graphics are now slimmed down with delimited light strips, the chrome crossbar between the lights has also been more intricately designed and placed under a glass cover.

There are three engines available for the market launch of the BMW X7, all featuring mild hybrid technology. The most important role is played by the new eight-speed Steptronic transmission, in which an electric motor is integrated, which additionally powers the drive with a maximum torque of 200 Nm and up to 12 hp. Because the new X7 can even drive very short distances purely electrically with this system, acoustic pedestrian protection is integrated as in electric cars.

The “base” is formed by two three-litre inline six-cylinder engines in the X7 xDrive40i and xDrive40d. The petrol engine from the xDrive40i is being used for the first time in the X7 in its latest expansion stage. Its performance has increased by 47 to 380 hp, the maximum torque is now 70 Nm higher than 520 Nm. Thanks to the additional power, the time from zero hundred is reduced from 0.5 to 5.8 seconds. The 340 hp diesel (352 hp mild hybrid system output) has been revised in detail and propels the heavy-duty X7 from 0 to 100 km/h in 6.1 seconds. A launch control function is integrated into all Models.

The top model is the M60i variant, in which the power (530 hp) and torque (750 Nm) correspond to the previous M50i. The 4.4-litre V8 biturbo-charged engine is connected as standard to a noisy sports exhaust system, the standard consumption (13.3 to 12.2 l/km) barely benefiting from the mild hybrid technology. The standard sprint time of 4.7 seconds is also on par with the previous M50i V8 xDrive model.

The interior of the X7 has been completely redone. Less with the furniture, but with the infotainment electronics and the operating system. The most striking innovation is, of course, the large curved screen, which is now also used in BMW’s flagship SUV. It combines the fully digital instruments with a 12.3-inch screen diagonal with the 14.9-inch central display in a self-contained unit, the latest BMW OS 8 being used as the operating system. The previous cover over the main instruments is no longer needed due to the screen’s low glare coating, which is why the entire display unit is now free. 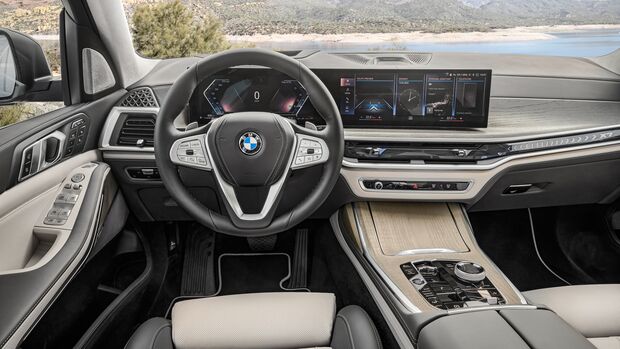 The curved screen is now also available in the BMW X7.

The automatic transmission’s gear lever is also gone, replaced by a small rocker switch and flanked by the iDrive controller. X7 customers do not have to do without the latter in the old way, while the rotary button has already been removed in the 2 series, for example.

The revision is complemented by extended standard features, comfort access, heated comfort seats in the front and panoramic glass roof now part of the basic equipment.

There are some functional improvements to the assistance systems in the new model. The forward collision warning system now has a right turn hazard detection system if cyclists and pedestrians approach parallel to the road. When turning left, the system recognizes oncoming traffic and can also avoid turning if there is a risk of a collision when braking. The optional Driving Assistant Professional has also been expanded with traffic light recognition and a merge assistant for the motorway.

With the facelift of the BMW X7, the Munich company brings a fairly extensive review of the large SUV. In particular, the front with the new slot lights has been heavily redesigned. Inside, the new dashboard with a curved screen, also new, is the visible sign of the facelift. But a lot has also happened on the drive side with the heavily modified six-cylinder petrol engine (first in the X7) and transmission-integrated hybrid drive on all models.