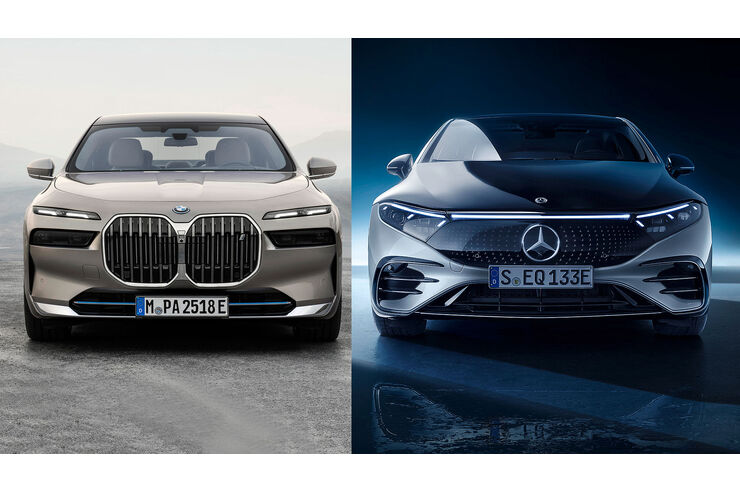 The new BMW i7, announced for November 2022, and the not much older Mercedes EQS may come from the electric-powered luxury sedan segment. They’re also in the same price league: BMW wants to see at least €135,900 for the i7 in xDrive60 version, while the Mercedes EQS 580 4Matic costs at least €135,529. But as soon as you look at their photos or the data sheets, it becomes clear that their manufacturers are pursuing completely different philosophies with these flagships.

For one, the i7, which only reveals on closer inspection that it’s not the new 7-series with only electrified combustion engines. And who, among other things, points with his powerful kidney-shaped grill: “Hey, me and my brother, we use the same platform, just different types of propulsion. If you choose me, you hardly have to get used to it!”.

Purely electric platform for the EQS

The EQS is completely different. It features an emphatically rounded and aerodynamically optimized bodywork and therefore looks very different from the conventionally designed S-Class. Some would say: more futuristic. The design alone seems to express: “Okay, my brother is a high-tech car too. But just with all the digital tricks. When it comes to drives, it’s from the past, partial hybridization notwithstanding.” And that’s somewhat true: Mercedes developed its own architecture for the EQS and its derivatives, which was designed exclusively for electric motors from the start. 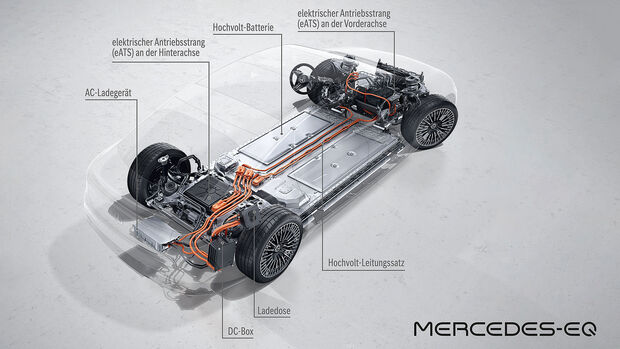 Unlike the BMW i7, the Mercedes EQS uses a platform specially developed for purely electric drives.

The design of the Mercedes EQS with hatchback and large tailgate results in a sensational drag coefficient: cD 0.20 means a record for production cars. The i7 can’t keep up with the conventional three-box sedan layout and small trunk lid, and it’s completely out of line with its really good 0.24 drag coefficient. The first tests in real conditions have to show how this affects the energy consumption. It hardly matters on paper: According to the WLTP standard and depending on the configuration, the EQS 580 4Matic consumes between 18.2 and 21.3 kilowatt hours per 100 kilometres. The i7 xDrive60 is from 18.4 to 19.6.

The WLTP range is also close to a standstill. BMW gives them for the moment the only variant available i7 with 590 to 625 kilometers. With the EQS 580 4Matic it is between 582 and 679 kilometers. However, the 580 is not the most energy-efficient EQS: the rear-wheel drive EQS 450+, whose usable battery capacity is also 107.8 kilowatt hours, has already proven itself in the hands of our charmer from electric cars Alexander Bloch how easy it is to cover more than 600 kilometers with a battery charge to leave. With its 101.7 kilowatt hours of high-voltage energy storage, the i7 should have bigger problems in this exercise. At least until it is also available in versions of the optimized consumption model.

Since there has been largely a tie so far, the question of which flagship has the best electrical properties must be decided by charging time. In fact. Because even in this category, none of the upper-class models can decisively differentiate itself. The i7 pumps direct current to its battery with a maximum of 195 kilowatts, the EQS manages a maximum of 200 kW. The following always applies: This only works for a few minutes (probably more like seconds), because otherwise the temperature in the energy storage would get too high and the battery cells would suffer. As a result, the charging time from ten to 80 percent of battery capacity on the fast charger is 34 minutes for BMW and 31 minutes for Mercedes. In the eleven kW charging station or wallbox, it takes nine and a half or ten hours to get to ten or one hundred percent.

4:3 for the BMW in the driving section

Does at least one of the competitors have the big nostrils or the shining star out front in terms of engine data and driving performance? Definitely yes, but depending on the category, Munich or Stuttgart. The i7 xDrive60 offers the highest engine power (400 kW/544 hp instead of 385/523 hp) and faster speeds in the left lane (top speed is electronically limited to 240 km/h; with the EQS 580 4Matic already at 210km/hour). In return, the Mercedes offers a clearly higher maximum torque (855 instead of 745 Nm) and accelerates from zero to a hundred much faster (4.3 instead of 6.1 seconds). So the score here is 2:2. 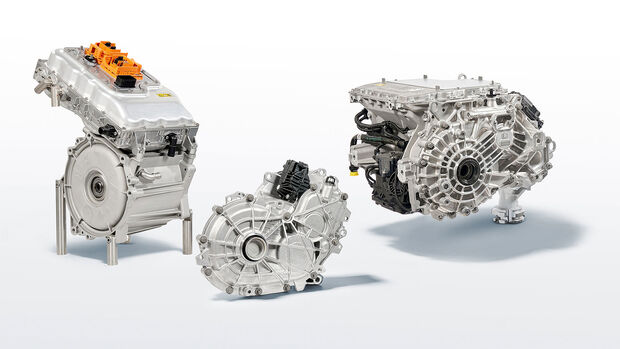 The permanent magnet synchronous motors (PSM) in the BMW i7 do not require rare earths at all. The EQS doesn’t do that.

Or 3:3 if it is considered that in both cases permanently excited synchronous machines (PSM) are used. “The advantage of these motors is that they can run sparingly, especially when performance requirements are low,” explains electric car specialist Bloch. In the case of the i7, these are current excited and therefore even dispense with so-called rare earths, which improves the environmental balance of the model. Mercedes has at least minimized the expensive metals in its electric motors, some of which are mined in questionable condition, but has been unable to eliminate them. But it is still the 4: 3 for the BMW in the driving chapter stoppage time.

A lot of car, a lot of weight.

Let’s face it: both the BMW i7 and the Mercedes EQS are colossal cars. The Bavarian is not only slightly stockier than the Swabian in terms of appearance: it is longer (5.39 instead of 5.32 meters), taller (1.54 instead of 1.51 meters) and much more heavy (2715 instead of 2585). ). Is the platform not only electric? It could be, but that doesn’t stop it from being clearly ahead when it comes to payload. If necessary, the i7 packs up to 535 kilograms, which increases the total weight allowance to an incredible 3,250 kilograms. The Mercedes carries a maximum of 475 kilograms on board; makes a gross vehicle weight of 3,060 kilograms. The Mercedes is also behind in terms of trailer load (750 instead of 2,000 kilograms braked). However, trailers may not be necessary for him at all, because he offers a larger trunk (610 instead of 500 liters). In addition, the trunk can be expanded to 1,770 liters; The rear seats of the BMW cannot be folded. 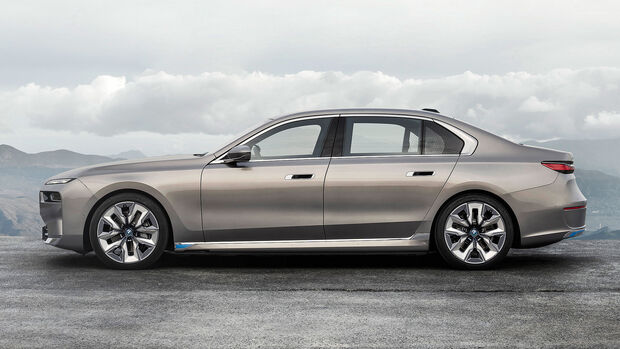 The BMW i7 is a very large and extremely heavy car. The total weight allowed is 3,250 kilograms.

At this point we could get lost in the endless digital possibilities. But we’ll leave it to comparing the obvious: the number and size of monitors. In this sense, the EQS is more advanced and brings into play the MBUX hyper display: three screens on the dashboard that, thanks to their joint coverage, look like a particularly wide monitor that stretches almost the entire width of the vehicle. . In the first row, the i7 only features a curved screen, quite small by comparison. In return, it offers a cinematic feel to the rear, with a 31.3-inch 8K resolution screen that can be folded out of the headliner.

The EQS should soon be able to reach autonomy level 3

Rather than highlight the detailed differences in the high-tech chassis or delve into the increasingly sophisticated security systems, we prefer to come to the show and take a look into the crystal ball for ourselves. Which quickly brings us to the subject of “autonomous driving.” Level 2 automated driving features can currently be used on both models. Mercedes wants to bring the EQS to standard level 3 in the first half of 2022. The “Drive Pilot” is the world’s first combination of assistance systems to have this approval. BMW wants to continue “in the medium term”; the term does not suggest that this will be the case in the very near future. 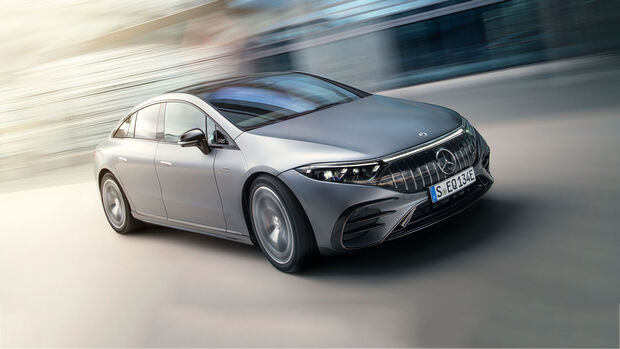 The Mercedes-AMG EQS 53 4Matic+ will arrive soon and it already has a price.

And what about the upcoming power models? The Mercedes-AMG EQS 53 4Matic+ has been announced for this year and already has a reference price (152,546 euros). It arrives -at least after reserving the “AMG Dynamic Plus” package, which costs 4,760 euros- at 560 kW/761 CV, a maximum of 1,020 Nm and a maximum speed of 250 km/h and accelerates from zero to one hundred km. /h in 3.4 seconds. Here, too, BMW takes a bit longer; the M70 xDrive with “significantly more than 600 hp” and more than 1,000 Nm will not arrive until 2023. If you look at the iX M60, which is closely related in terms of drive technology, the all-wheel drive vehicle should even provide up to 455 kW/ 619 hp and a maximum of 1,100 Newton meters. It doesn’t matter how much power exactly: BMW initially promises “only” an acceleration time from 0 to 100 km/h under four seconds. It seems as if one and the other are ahead here as well. Which keeps things pretty exciting.

Well definitely the BMW i7 xDrive60!

The Mercedes EQS 580 4Matic, that much is clear!

The BMW i7 xDrive60 and the Mercedes EQS 580 4Matic are the best examples of how completely different approaches can lead to very similar results. Neither in electrical properties nor in performance values ​​or practical properties can one of the noble rivals obtain decisive advantages. In any case, it’s in the details: the i7 dispenses with rare earths, the EQS will soon be able to drive autonomously at level 3. The data comparison finally leads to a crucial finding: we have to drive the old-fashioned way on the highway and the test site to find out which is the best electric-powered luxury ocean liner. And we will do it as soon as possible, you can be sure.