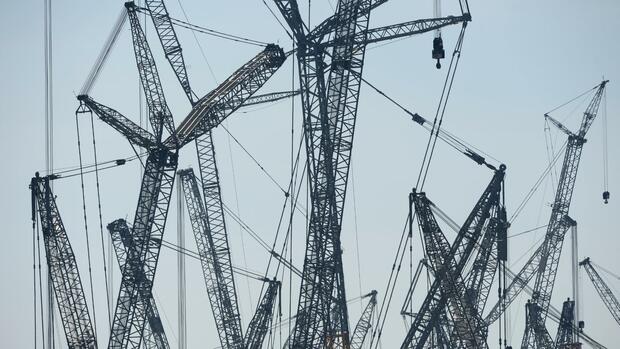 stuttgart Russia is one of the most important markets for Liebherr. The large family-owned company manufactures construction machinery, aircraft parts and household appliances with 50,000 employees worldwide. The Swiss-based Swabian company does not report how many sales it makes in Russia.

Liebherr employs around 2,000 people throughout the country, including at two production plants near Dzerzhinsk in the Nizhny Novgorod region and at a sales and service company based in Moscow. Liebherr operates three service locations with spare parts depots near the Ukrainian border.

Once a year, the Liebherr family appears in public in an interview in the group’s annual report. In addition to the brothers Willi and Isolde Liebherr as co-chairs of the board of directors, the third generation now also has a voice, Willi Liebherr’s son Philipp, 36, and Isolde Liebherr’s daughter Stéfanie Wohlfahrt, 42.

“The humanitarian consequences of the war are terrible,” says Wohlfahrt in the interview. The family business donates to the Swiss Red Cross, among others, to support people in war zones and those on the run.

The family hopes that the fighting will end as soon as possible. “In recent weeks we have focused on aligning our activities in Russia with the sanctions that have been imposed on the country,” stresses Willi Liebherr, now 74 years old. “The medium and long-term effects on our business activities there are currently difficult to assess, but we expect significant economic consequences.” The war reminds Willi Liebherr of “times that were believed to be in the past”.

“We started the year with a very good order situation”

Last year, Liebherr had just reached the level before the corona crisis with an increase in sales of 12.6 percent to 11.7 billion euros. The annual result was also higher than the previous year by 545 million euros.

The family cares about business, but remains true to its business optimism despite the war in Ukraine. “We started 2022 with a very good order situation and, despite changed framework conditions, we are cautiously optimistic about the rest of the year,” says Isolde Liebherr.

In Ukraine, Liebherr works closely with long-standing business partners who sell Liebherr construction machinery and household appliances locally. Liebherr has been operating in Russia since 1965. In recent weeks, Liebherr has also come under fire for its connections to Russian military and commercial vehicle maker Kamaz. According to the family business, it developed an inline six-cylinder engine together with Kamaz from 2014 to 2018. Since then, Kamaz has been producing these units on the basis of a license agreement. However, Liebherr continues to supply gear hobbing and shaping machines directly.

Liebherr works on electrical drives for cranes and excavators

However, Liebherr did not deliver cranes for military use to Russia “even before the sanctions came into force”, the company stresses. These mobile and recovery cranes were only to be delivered to the German Armed Forces and the Dutch Armed Forces.

Liebherr is jointly managed by the second and third generation of the Liebherr family. However, non-family managers run the operating business. His focus is on creating transformation to alternate units. The group of companies works on hydrogen-powered combustion engines and their injection technologies, as well as electric drives.
The family business has expanded its range of electrically powered construction machines to include two fully electric concrete mixer trucks. Work is also underway on the first all-electric offshore crane.

Furthermore, Liebherr has prepared several product lines for the use of hydrogenated vegetable oils (HVO) as fuel. The locations in Ehingen and Kirchdorf an der Iller already refuel all machines with the climate-neutral fuel as standard at the factory.

Plus: Working in a war zone: this is how German companies fare in Ukraine