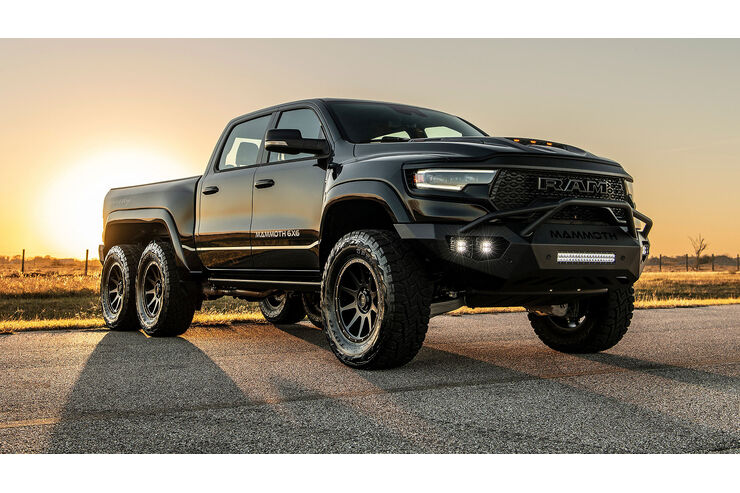 The American tuner Hennessey builds the ultimate beast from a Ram TRX. Production of the upgraded three-axle V8 “Hellcat” pick-up now begins. Only twelve copies should be made per year.

Hennessey has a lot of experience with 6×6 conversions of full-size pickups for the US market. The best known model is the Velociraptor, a Ford Raptor converted to three axles. On the body side, this sets the direction for a very similar conversion. Based on the Ram 1500 TRX, the American tuner produces another six-wheeler archetype: under the name “Mammoth” (mammoth), Sealy, Texas, USA, creates an extended, raised and beefed-up tuning variant in several forms of hardcore: Trucks.

However, the mammoth ram puts a shovel in terms of performance compared to the Velociraptor. One could certainly argue that the Ram TRX, which has been available since fall 2020, with 712 hp from a supercharged 6.2-liter V8, is anything but weak. But that’s not enough for the Mammoth. Its engine received an even larger compressor, a modified intake system, new injection nozzles and modified engine electronics. As a result, the power amounts to 1,026 hp, the maximum torque increases from 881 to 1,314 Nm.

But it is not enough for Hennessey to simply increase the power, this also happens with the entire car! With the help of lift kits and suspension components from Bilstein, the truck’s bodywork gets considerably closer to the sky, which seems to be the only limit for this car. Thanks to 20-inch, ten-spoke wheels, each covered with 37-inch Toyo off-road tires, the Ram TRX gets a little higher off the ground when it transforms into the Mammoth 1000 6×6. Overall, it’s almost three inches taller than the already impressive production car. It’s nice that Hennessey gave the monster electrically extendable steps. 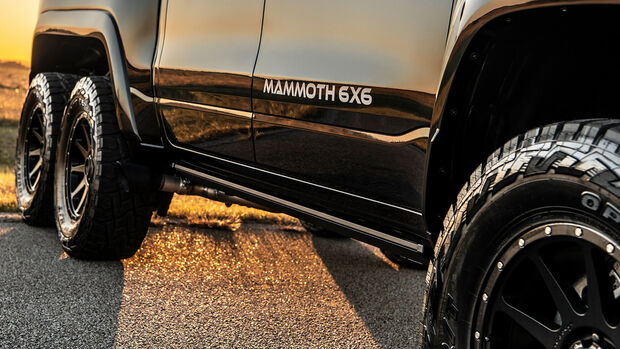 The Mammoth is nearly three inches taller than the production TRX. The electric steps should not be missing.

By the way, with the additional axle, which lengthens the TRX from 5.92 to 7.19 meters, not only two more wheels move under the car. In the course of converting the Mammoth, Hennessey enlarged both the wheelbase and cargo area and gave the third axle a lockable differential. Since the center axle can also be locked, the Ram TRX shouldn’t lose any of its off-road prowess during its transformation.

Visual changes inside and out

To ensure the latter, the Texans are giving the Mammoth some visual quirks. New front and rear bumpers are designed to increase ramp and departure angles. Of course, a front bar and a set of more or less decorative stickers should not be missing on a martial vehicle like this. The same applies to numerous LED auxiliary lights, which are distributed around the XXL body. Inside, however, Hennessey is holding back. Here there are only some embroideries for the seats and headrests, as well as plates. One can also be found in the engine. 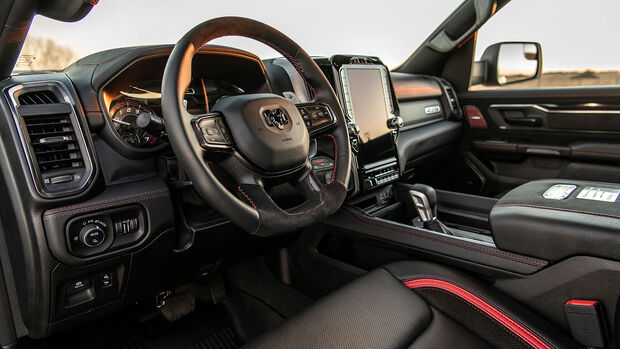 Inside, the changes are limited to a few embroideries and badges.

You probably won’t see the mammoth pick-up in the wild that often: Hennessey only wants to build twelve copies of the Mammoth 1000 6×6 TRX per year. You have to be able to afford it first: The price for the three-axle model, which already includes the required base Ram 1500 TRX, is $449,950. According to the current exchange rate, this corresponds to a good 417,000 euros.

Originally, Hennessey had planned an even more powerful and expensive version of the Mammoth. The tuner wanted to install a different machine on the extended three-axle vehicle, namely the “Hellephant”, instead of the not-so-extreme “Hellcat” V8. If you’ve never heard of “Hell’s Elephant”: This is a seven-liter V8 that Ram’s parent company, Stellantis, offered as a customer engine that includes an installation kit, originally rated at 1,000 hp. Hennessey would have loaded it with 200hp and wanted to get 1200hp out of the big block via supercharging.

However, Hennessey may have failed in the project of making the final product street legal; Meanwhile, this version of Mammoth is no longer spoken of. Stellantis’ predecessor FCA offered the Hellephant engine, which sold out in 48 hours in 2019, specifically for vehicles built before 1976; after that, even in the US, regulations are officially too strict to legalize the Brutalo unit. Three copies were planned at a price of $500,000 (about €463,500); they will probably never come.

The question “does anyone need something like this?” Actually, it is always useless with the models of the American tuner Hennessey, because vehicles have always been built here that are primarily intended to be exciting, for people who can afford them. In particular, the acceleration of the giant trumpet should attract the described clientele at least to a relevant extent.