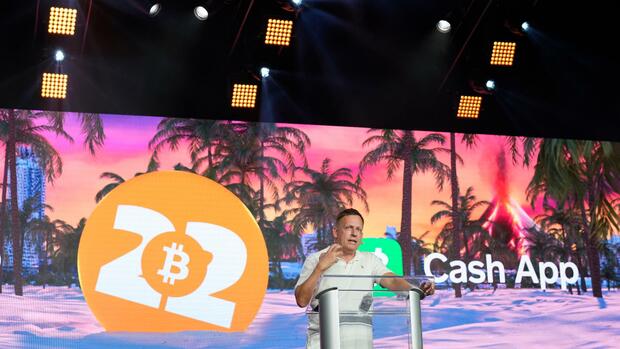 frankfurt Of course, one could simply shake one’s head at Peter Thiel’s speech at the Bitcoin 2022 conference in Miami. On the fact that the tech investor berated 91-year-old Warren Buffett as a “sociopathic grandpa,” he smeared him along with 66-year-old JP Morgan boss Jamie Dimon and 69-year-old Blackrock boss , Larry Fink, as “financial gerontocrats.” ”. and therefore directed at his age.

Particularly strange: Thiel blames all three for the fact that Bitcoin has yet to break the $100,000 mark. In his opinion, as a result of the trend towards sustainability, because investors who pay attention to energy efficiency criticize Bitcoin for the high energy consumption during mining.

The content is nonsense. The fact that a bitcoin still doesn’t cost anywhere near $100,000 is simply because most people on the planet aren’t interested in coins. On the one hand, obviously because of the lack of conviction that Bitcoin would significantly improve life.

Many people don’t seem to see any tangible benefit or value, and they also fear the uncertainty that comes with the market. In the last year alone, $14 billion worth of cryptocurrency was stolen by scammers, according to analytics house Chainalysis.

Simply dismissing Thiel’s verbal attack as unpleasant atmosphere would be too easy. Because his rhetoric is dangerous. Thiel talks about “enemies lists”, calls Buffett “enemy number one”, sustainability approaches are a “hate factory” which he equates with the Chinese Communist Party. In essence he expresses it: Bitcoin means freedom, everything else is dictatorship.

The crypto community should distance itself from Thiel

To legitimize this point of view, the 54-year-old man, ironically an elderly white man, depending on how you look at it, presents himself as a representative of a youth movement. First of all, the young generation in particular has a strong sense of responsibility towards the environment.

While Thiel would prefer to abolish the state, many young people in particular favor restrictions in favor of greater sustainability.

The biggest difference between Thiel and those targeted is not his age but his political views: in 2016 Thiel was one of Donald Trump’s biggest donors and later promoted right-wing hardliners, now he’s back as one of the major funders of “Make America Great Again” onward.

Thiel is not primarily younger than Buffett, Dimon and Fink, but he is more to the right politically. The crypto community should not be instrumentalized by him.