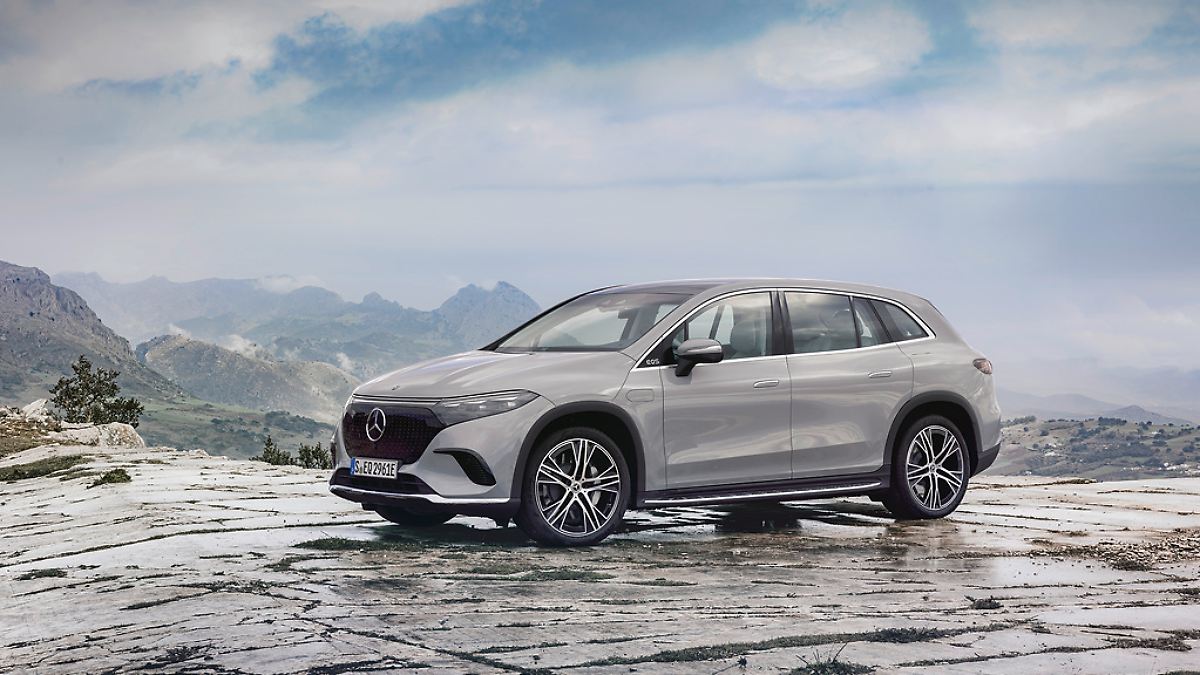 660 kilometer range
Mercedes EQS SUV: it is not an electric waste

Based on the newly developed electric platform, there will definitely be no station wagon after the EQS and EQE, both of which are sedans. But an SUV. Mercedes simply calls it the EQS SUV, and it should be on the market in the second half of the year.

Once the platform is fully developed, everything happens in quick succession. This is easy to read on Mercedes EQS and EQE. Both electric sedans made their debut within a year. And in just over six months, the Swabians will launch the third model based on the same architecture, the EQS SUV. It marks the flagship of the electric SUV models, very similar to what the conventional models of the GLS are currently doing.

An electric SUV over five meters long with up to seven seats? Here and in Europe in general, these dimensions should not exactly meet with enthusiasm. Here they love more compact. But Germany is no longer the benchmark in the automotive world. China and the United States set the standard. This is where the big car buyers live, whether they make sense or not. Prestige and status are very important in the societies there.

The EQS SUV, at 5.13 meters, embodies much of this without being too ostentatious. The designers have taken pains not to make the body as upright and bulky as in the GLS. The EQS SUV has pleasing proportions and is four inches lower than its counterpart from the world of combustion engines. And for good reason: efficiency. Air resistance accounts for more than three times as much fuel consumption as all electric propulsion.

Therefore, all details of the body of the EQS SUV received an aerodynamic fine-tuning. It ranges from the lower profiling of the running boards and the special aero wheels to the removable edge of the roof spoiler. During the wind tunnel vote, people even thought about camera mirrors, which would offer much less wind resistance than regular mirrors. But SUVs are also mainly used in urban environments, where aerodynamics are not important, but the mirror displays constantly consume electricity. And it always comes from the battery.

Due to the same architecture as the EQS sedan (both have a 3.21 meter wheelbase), the EQS SUV also has the same large high-voltage battery with a useful capacity of 107.8 kWh. The energy content should be sufficient for a distance of 660 kilometers, measured according to the WLTP cycle. In everyday life it should be around 500 kilometers.

The EQS and EQS SUV are also close in terms of handling. When the car comes out in the fall, the 450+ will be the base model. It has a 360 hp electric motor on the rear axle. The 4Matic variant also has 265 kW, but still has a motor on the front axle. The provisional top of the range is the EQS SUV 580 4Matic with 544 hp. Mercedes will introduce a Maybach variant later, which will surely be given a few extra kilowatts.

The high motor performance and a weight of more than 2.5 tons not only require a large battery, but also efficient charge management. An 11 kW on-board charger is provided for home use, with 22 kW available as an extra. Up to 200 kW are possible at high-performance CCS (direct current) charging stations, such as those found along highways. Mercedes designed the battery cells in such a way that the high charging current can be kept constant for as long as possible. It should be possible to “refuel” about 250 kilometers in 15 minutes.

The package concept shows that SUVs are increasingly taking over the function of pickup trucks. The trunk has a capacity of 645 litres; if the rear seat backs are flat, up to 2100 liters fit. No truck can do that. The rear row of seats can be electrically pushed forward by 13 centimeters, the trunk then grows to 800 liters. Mercedes also offers a third row of seats with two individual seats as an option. For adults, however, it gets pretty cramped here. A trailer hitch is also available for the EQS SUV, and up to 1.8 tonnes can be hitched with it.

The interior of the EQS SUV shows a familiar image. The cabin was taken 1: 1 from the sedan. The hyper-display – also an extra charge for the SUV – is already in high demand for the EQS sedan, especially among Asian and US customers. The screen, brightness and responsiveness are excellent, operation and menu navigation are intuitive. The basic layout, internally called layer zero, always forms the navigation map. The other options are ordered above this. Everything is easy to understand and easy to understand. And if you don’t want to click, press or swipe, just use MBUX voice control. It is one of the best currently on the market.

The same applies to the electronic assistants that abound in the EQS SUV. This is part of the house security philosophy. Mercedes recently received certifications for semi-autonomous driving. The EQS SUV is likely to be the first electric SUV that can be driven at level 3.

In today’s almost daily convoy traffic on the Autobahn, the driver can take their hands off the wheel at speeds of up to 60 km/h and concentrate on other things besides staring stupidly at the rear of the vehicle in front.