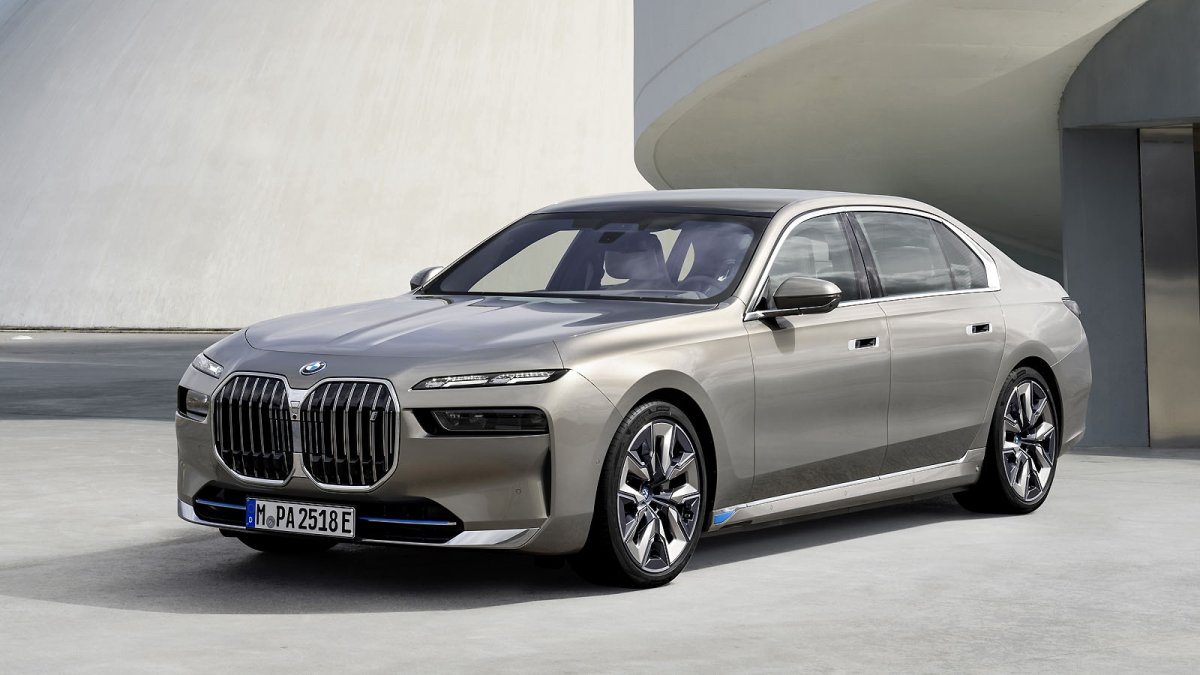 BMW relaunches its top-of-the-range model. From the end of the year the seventh generation will be marketed and will remain true to its traditional role as a carrier of technology. However, this means something different for the upcoming 7 Series than it does for many other manufacturers, because it is groundbreaking above all else as it remains a car for all types of driving. So as an electric car it doesn’t look much different than with a diesel engine.

One form for all units

The disadvantages of a conventional car that is then electrified are to be avoided by a universal architecture “that was designed from the outset for three types of drive”, as BMW writes. What is meant is mildly hybridized conventionally, like a plug-in hybrid or fully battery electric. All-wheel drive included.

BMW long ago left the direction it took relatively early with the i3. The compact that appeared in 2013 was an electric car designed for efficiency through and through, which could only be ordered with a (terribly inefficient) gasoline auxiliary motor as a concession to customers with alleged range anxiety. The effort and costs were high compared to the performance, probably because of this experience, BMW wants to minimize risk with the 7 Series and is willing to give up the last most expensive tenth of efficiency. As the smallest of the big German premium manufacturers, BMW is unlikely to gain a significant economic advantage from a parallel structure for battery electric cars due to lack of quantities.

Initially as an electric car

With the new 7 Series, however, BMW can build all drive variants on one assembly line (in Dingolfing). The fact that the battery-electric BMW i7 is initially the only model available at launch is an exclamation point: electric mobility is the future, the other units will be available for as long as they are needed.

The body has – how could it be otherwise – continued to grow. Due to the large number of 7 Series sold in length-loving foreign countries, the normal body was already very much on the defensive in the still current 7 Series, as a result of which the two previously available length versions were abandoned. Even compared to the previously available long version, the wheelbase has increased by five millimeters to 3.22 meters, and the overall length of all bodies is 5.39 meters. Depending on the model, the cargo space has a capacity of between 500 and 540 litres.

We also owe the “expressive” face of the new 7 series, benevolently speaking, as well as its light show and the splendor of artificial glass, above all, to the preference of customers for brilliance in markets outside Europe. Yes, the 7 Series has “sparkling crystal headlights,” as BMW writes, from Swarovski, and that’s not all.

BMW’s large sedan will be available from the end of the year with three types of propulsion, the first being battery-electric. The cabin is always the same.

Design sensitivities, like the ones that drew a huge sigh when Series 7, drawn by Chris Bangle, came out in 2001, are probably not going to be a threat. They seem to have largely outgrown themselves, thanks to globalization. What is striking at first glance is the closeness of the front below the headlights (LED matrix) and the kidney-shaped grille compared to the current 7 Series. The superior model works electrically and only needs the grill as a lighted stage element. Fossil-powered models do not need additional cooling airflows for the intercoolers and get by with the supply from the existing flow opening behind the grille.

All models have a fixed panoramic roof, which means that the sliding roof, which is particularly popular in Germany, is no longer available. The length of the new models allows rear loungers with a variety of expandable comfort functions. The doors can be opened and closed electrically if desired, and a screen with a diagonal of 31.3 inches, hi-fi options (Bowers & Wilkins) and sound systems with an output power of almost 2 kW and “exciters” vibrating on the chairs are also available as options.

All European models offer four-wheel drive, with automatic front-axle engagement and torque vectoring via center and rear differentials on internal combustion engine models, and dual motors on electric cars. BMW installs air suspension as standard, with four-wheel steering with roll stabilization available as an option. Wheels measure at least 19 inches, up to 22 inches can be ordered depending on trim, larger dimensions are said to be available as accessories. Driving assistance offers everything feasible with the state of the art to be able to offer SAE level 3 “medium-term” autonomy, subject to national regulations. However, BMW has not yet announced when that will be. Whatever the reason, from 2023 the Series 7 should also be able to be controlled remotely from the outside with a smartphone.

For the first BMW i7 xDrive60 with a 101.7 kWh battery, which should be available from November, BMW forecasts 190 kW for the front wheels and 230 kW for the rear wheels, the total power should be 400 kW and the torque up to 745 Nm. This is already at the level of the current V8 model and more than enough for much more than adequate driving performance, such as accelerating the 2.5-tonne vehicle from 4.7 seconds to 100 km/h. As autonomy, BMW gives from 590 to 625 kilometers in the WLTP.

More functions will be controlled via touch screens, although this is not desirable from an operator safety point of view. But the customer is demanding it after years of being persuaded by the auto industry to have “smartphones on wheels.”

Torque vectoring is a point of honour, four-wheel steering can further contribute to handling. Both are necessary so that the at least two and a half tons of weight feel as little as possible. DC fast charging with up to 195 kW should in the best case allow a further 170 kilometers of range to be recharged in 10 minutes. The electric top model i7 M70 xDrive will follow in the course of 2023, probably with 485 kW and 1000 Nm, further details have not yet been announced. BMW promises “particularly sporty performance in the luxury segment”.

The development of new combustion engines is history

The four and twelve cylinder engines still offered in the current 7 Series are no longer available, the only configurations remaining are the three liter petrol and diesel engines and the 4.4 liter V8 petrol engine for markets outside of Europe, all engines that are already known in the current model range. The development of new combustion engines has been history at BMW since the last model change, and their diversity is also diminishing thanks to electrical support. As an exterior sign, one reads in awe, the exhaust tips on fossil-powered models are now hidden rather than staged.

As a plug-in hybrid top model, the BMW M 760e xDrive with a 280 kW three-liter inline six-cylinder petrol engine and a total output of 420 kW and 800 Nm should be on a par with the current V12 model. BMW specifies a battery electric range of 80 kilometers and a consumption (both according to WLTP) of 1.1 litres/100 km.

As a battery electric car, the 7 Series is built like a Tesla Model S: traction battery on the mezzanine between the axles, one electric machine up front and one in the rear.

In the BMW 750e xDrive, BMW wants to offer the almost identical plug-in hybrid drive with a total output of 360 kW and 760 Nm, the gasoline engine offers 230 kW. In addition to the engine, both models also have an eight-speed automatic transmission and all-wheel drive in common, and will be available from 2023. Compared to current plug-in models, the energy content of the battery has increased by more than 50 percent. and the loading speed has doubled.

Only one model with diesel engine

In Europe, only the 740d xDrive with a 220 kW straight-six diesel engine, supported by a powerful 200 Nm electric motor in the transmission, runs without an external load. This gives the unit an impressive 670Nm total torque, which is only available for peak acceleration. However, the combustion engine alone already offers 650 Nm. In the WLTP, this engine achieves between 6.9 and 5.9 liters per 100 km. BMW also wants to offer this model from 2023.