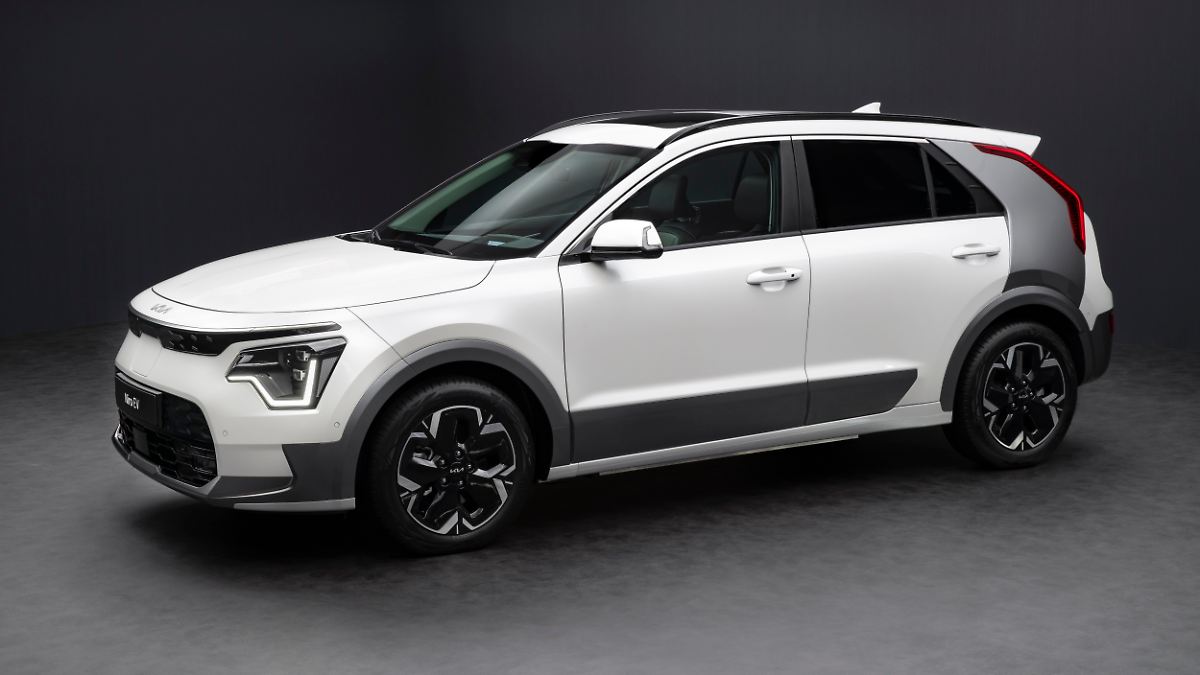 Kia will launch the second generation of its Niro crossover this summer. The mix of SUV and station wagon comes with a heavily modified design and again with three electrified driving variants. The new Niro models will be launched in June, the electric car in July. What do they have to offer?

In the large Kia family, the Niro plays a supporting role in the orchestra of nine models, only having to give way to the Ceed. The secret to the success of the compact five-door car with the smooth look of an SUV also lies in the diversity under the hood. It allows you to choose between three drive variants, all of them more or less electric: a normal hybrid with no possibility of charging at the outlet, one with only that “plug-in technology” and a purely electric car, for which it was good last year. two-thirds of all buyers have decided.

In the second generation of the Niro, which is always launched in the summer, Kia once again relies on its proven trio. As before, the hybrid combines a 105 hp/77 kW 1.6-litre petrol engine, which is combined with a 43.5 hp/32 kW electric motor. Together they deliver 103.6 kW/141 hp. The small 1.32 kW/h battery is sufficient for purely electric locomotion over short distances or in reverse. Since the combustion engine is constantly switched off and on again, especially in urban traffic, the entry-level Niro, which costs 30,690 euros, has very low consumption values ​​(approx. 4 litres/100 kilometres) according to the applicable regulations.

The plug-in hybrid, which can be recharged from a socket, is completely different. Here the Koreans have significantly increased the power of the electric motor. It has increased by 18 kW/24 hp and, together with the unchanged petrol engine, it has an output of 135 kW/183 hp. Since the battery capacity has also increased slightly (now 11.1 kWh), its electric range has improved to 65 kilometers and even 84 kilometers in urban traffic. Currently, its clients can still count on a subsidy of 7,177 euros, which will be deducted from the price of 36,690 euros.

Buyers of the electric car, now called the Niro EV, can have the state and manufacturer transfer €9,570. This means that the Stromer is just around the corner from 30,420 euros. Without financing it would be 39,990 euros. Compared to the e-Niro, which is now being phased out, little has changed in its technology. With the 64 kWh battery, it can now travel 463 kilometers, eight more than before. Kia no longer talks about the weaker battery (39.2 kWh) that could previously be ordered.

Preheat system can be ordered

Another novelty is the option to connect to a 100 kW direct current column, which can recharge the battery from 10 to 80 percent in 45 minutes. A preheating system for the Niro can be ordered for an additional charge, which prepares the battery for charging at low temperatures and ensures faster power delivery. If a charging stop is programmed in the navigation system, the system activates itself.

Kia packs all of this into a new dress while also giving the Niro a modern interior. The body has grown in all directions, for example by six centimeters to 4.42 meters. Surprising changes on all sides: At the front, the rather conservative face became much more agile. The typical “tiger face” of all Kia models has been widened and extends to the bonnet. The shape of the LED daytime running lights is unusual, reminiscent of the curve of the human heartbeat on a medical screen. The parallel lines make the design calmer and a bit more dynamic than before.

The huge C-pillar, which grows from the edges of the rear wheel arches to the sides, is striking. The rear is dominated by new boomerang-shaped taillights set high to the side. The rear window under the roof spoiler now has a sportier and narrower look.

The interior is characterized by two 26-centimeter monitors that connect to each other. For an additional charge, a head-up display projects the most important information directly into the driver’s field of vision inside the windshield. Much recycling of materials. The headliner is made from recycled paper fibers, while fibers from eucalyptus leaves are used for the seats. Thanks to the new platform and the wheelbase, which is 2 centimeters longer to 2.72 meters, there is more space and a feeling of spaciousness for the occupants, especially for the passengers in the rear seats. The trunk swallows 475 liters in operation for five people.

The new Niro is not stingy with the range of electronic helpers and assistance systems. A new feature is a warning system that recognizes pedestrians and cyclists, but also watches for oncoming or crossing traffic and sounds an alarm if there is a risk of a collision. Or rear-seat passengers warn if they don’t see an oncoming car or bicyclist by opening the door. Another example is remote controlled parking in and out of tight spaces or outside the garage. Also, like most new cars, the Niro is always connected online with the outside digital world.

The new Niro models will hit the streets in June and the e-car a month later.