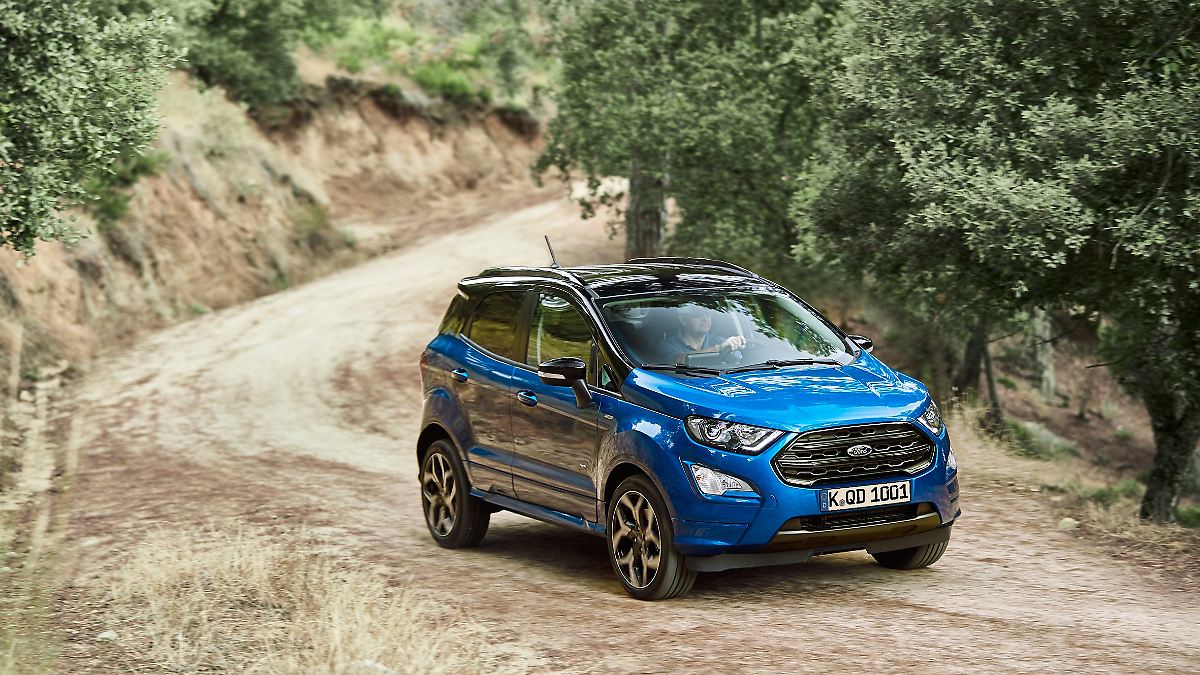 Visually, the Ford EcoSport looks like a large SUV, while its basis is that of the small Fiesta car. It only gets really homey in the small SUV after the second facelift. On the other hand, the EcoSport has a good figure in the TÜV and offers decent results there. But he is not quite perfect.

Small SUVs are popular. Ford has had such a model in its portfolio since 2003, but it took a long time to bring it to Europe. We are talking about EcoSport. The first generation was built in Brazil between 2003 and 2012 and was very popular in South and Central America. Only the second generation, which uses the seventh generation Fiesta as a technological donor, makes the leap to Europe. It made its debut on the German market in 2014 and has since competed against Renault Captur and Opel Mokka.

It only becomes comfortable after the second facelift.

With its angular, rugged design, the EcoSport is a tough little SUV. The spare wheel attached to the tailgate also contributes to this in the first models, reminiscent of authentic off-roaders. Without the wheel, the vehicle stretches 4.01 meters long. Space is fine, the driver and front passenger sit comfortably tall. The trunk volume varies between 333 and 1238 litres. Access to the trunk is via a rear door that opens to the side.

The elaboration of the first vintages was only partially satisfactory, so that the first facelift took place just over a year and a half after its launch on the market. Since then, the flashy spare wheel is no longer standard equipment, and the somewhat understated interior has been upgraded with chrome trim and dimmable lighting. The jagged board and many control buttons have been kept. 2017 Ford does the next facelift. Since then, the front end design has been based on its big brother, the Kuga. Inside, the choice of materials has been improved, for example with foamed plastics on the dashboard. The dashboard has also been revised and is similar to that of the Fiesta.

At market launch there was a 112 hp 1.5-litre petrol engine, the well-known 125 hp turbocharged 1.0-litre diesel and a 90 hp 1.5-litre diesel. The engines are mated to a five-speed gearbox as standard, with a six-speed automatic available for little Otto. Power was sent to the front wheels only.

According to the manufacturer, gasoline engines consumed between 5.3 and 6.2 liters on average, diesel was content with 4.6 liters. With the first facelift in 2015, the diesel received a little more power and reached 95 hp, while its consumption on the technical sheet was reduced by an average of 0.2 liters. The chassis was also tuned differently. Since then, the little guy rides a little smoother over bumps in the road.

All-wheel drive was also available, though only for a short time. Between 2017 and 2019, Ford offered 4×4 drive for the EcoSport along with the 125-hp 1.5-liter diesel engine. Speaking of diesel: The expansion stage of the 1.5er with 120 hp and an average consumption of 4.2 to 4.6 liters determined by Ford was available between the end of 2019 and the end of 2020. At that time, Ford also took the others out of the range diesel, mated to a six-speed manual gearbox like the petrol engines from 2017. What remained were the three-cylinder petrol engines with 125 hp and 140 hp. From mid-2018 to the end of 2021, the three-cylinder engine with 100 hp was added to the range of gasoline engines.

The front-wheel drive five-door car initially had only one equipment line, which included 16-inch alloy wheels, air conditioning and a CD radio. The options list was short, listing things like cruise control, App Link smartphone integration, and metallic paint. Later, the EcoSport was offered in four trim levels. Those who value a sporty appearance will find what they are looking for in the “ST Line” equipment variant. Optional extras included two-tone paint, xenon lights, and part-leather seats.

The mix of comfort levels and assistance systems has changed over the long production period. Therefore, those interested in a used car should carefully read which team has the desired copy. On the program since 2020: the robust “Active” design line. Here, among other things, increased ground clearance and protective barriers on the body are included in the scope of delivery. The EcoSport achieved a four-star rating in the NCAP crash test in 2013.

At the TÜV, these are pretty small things.

In the TÜV, the small SUV is doing quite well. So far it has passed the main inspections (HU) better than the average of all the vehicles examined. The lighting system and frequent oil leaks are particularly problematic on older models. TÜV inspectors also often criticize the functionality of the parking brake.

Conclution: Anyone looking for a mini-SUV with a rustic look is in good hands with the Ford EcoSport, as long as they pay attention to well-maintained vehicles with a fresh TÜV label. For older models, often with high mileage, you have to invest around 8,000 euros. If you want to buy a high EcoSport (2015), you have to have prices around 10,000 euros; around €12,000 is due for vehicles after the 2017 facelift. Rarely offered four-wheel drive vehicles start at just under €17,000.