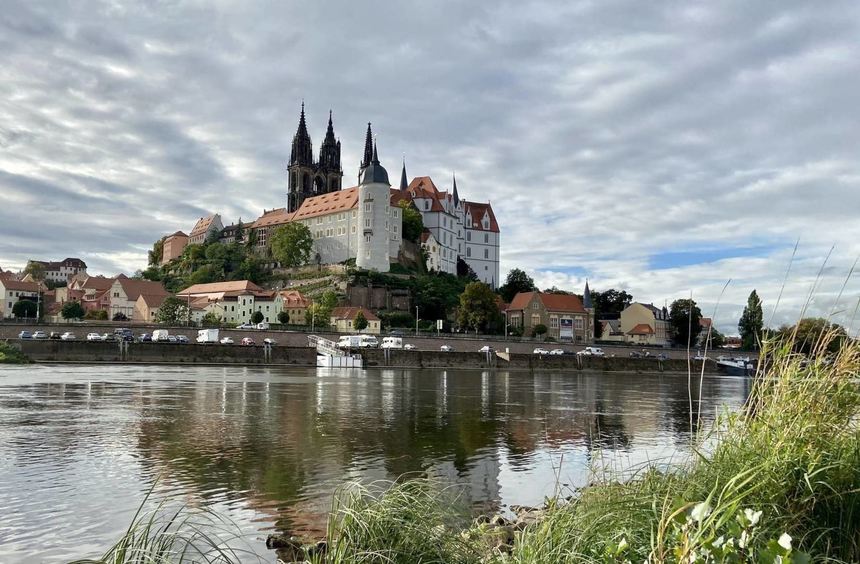 We start our multi-day bike tour in Schmilka, just across the Czech border. Awarded the most beautiful village in Saxony, around 70 residents live here in 30 houses. A whole town for guests. People have been vacationing here on the Elbe for more than 200 years, but the current national park and biorefuge has only been accessible by car since 1908. Until then, beer had to be transported on foot in barrels to Schmilka as people in a sedan chair, because there was a license to sell but no manufacturing rights.

Fortunately, this limitation no longer exists. The natural beer, which has a limited shelf life, is brewed in a brewery and matured in a copper kettle that was installed in 2015. During the Corona stagnation it was sometimes not emptied, now it is flowing again. For 3.90 euros per liter you can even take the amber beer home with you. The painter Caspar David Friedrich is said to have once sat in the great tavern and in any case captured many landscape motifs here in the region, which can also be traversed on a trail named after him.

Seven stages along the Elbe Cycle Route to experience

In these seven stages, our reporter Hans-Jürgen Emmerich rode the Elbe Cycle Route from Schmilka to the Bauhaus city of Dessau:

Cycle to the right or left of the Elbe, this question comes up again at each stage. At Schmilka-Hirschmühle, an old ferry connects both shores, making travel by train easy. To the right of the river, the steep rock walls of old quarries lead to Bad Schandau. Although the bike lane has been around for almost 30 years, there are sometimes gaps and missing signs. Up-to-date traffic information on your own website is even more useful. Because once you land on the wrong side, the detour to the correct route can quickly turn into miles. Several providers, such as AugustusTours, take care of light luggage by transporting suitcases and bags from hotel to hotel.

Idyll at the gates of Dresden

If you want to visit the legendary Königstein Fortress, you should allow at least three hours. And if you cycle to the left of the Elbe in the direction of Dresden, you can only reach Pillnitz Castle and the garden by ferry, as long as it is in operation. If not, a delicious dinner at the Fährhaus Kleinzschachwitz, located in a district of Dresden with a view of the river and the castle across the water, tempts you.

Zwinger, state parliament, Semperoper, market and Erzgebirge arts and crafts: the state capital of Dresden is not easy to explore while passing through. You have to come back here sometime. But now it’s time to pedal, because the objective of the second stage is Meissen. On the right bank of the Elbe it runs through the Saxon vineyards, on the left bank of the Elbe the journey is more leisurely, passing among other things the cultural monument Gohliser Windmill, built in 1832 and in operation as a mill until 1914. To a large extent dilapidated in GDR times, it was rebuilt in 2006 and now houses a museum and restaurant. A little further on, a magnificently painted building appears in the middle of the green, a technical building with a large representation of a food scene with vines and a wine cellar.

Finally, Meissen is waiting with the cathedral and Albrechtsburg. For the popular photo motif with the reflection in the Elbe, go to the other side, then continue to the left of the Elbe, passing a former Cistercian monastery, now maintained and used by a non-profit association. After 50 kilometers by bike, the Elbklause directly on the river offers not only a relaxing place to stay, but also a delicious regional dinner: two Niederlommatzscher Elbkahne (potato dumplings with meatloaf filling), plus a Bennoschoppen from the cooperative of wine growers from Meissen.

Noodles in the museum

Exactly the right snack for the next day, when you not only have to pedal against the speedometer, but also in the pouring rain. When traveling to Mannheim’s twin city, Riesa, a visit to the pasta museum is a must, not only for the delicious spaghetti bolognese at the “Makkaroni” restaurant, but also for the insight into the history of pasta and its production. At Strehla it is supposed to cross the Elbe again, but there is no sign of the ferryman far and wide. An attentive young man has the crucial advice: “You have to knock on the window.” V died in April 1547 Protestant troops defeated. A theme in the museum.

The next stop is in Torgau, the location of the State Garden Show in 2022. “After Wittenberg, this is the most important Saxon Luther site,” emphasizes Anja Bauermeister of the Torgau Information Center: “Wittenberg is the mother of the Reformation , Torgau is the nurse”. There are many memories of Luther’s wife, Katharina, in particular. Of course, there’s no way around Wittenberg, but the crowning glory of the trip is the Bauhaus city of Dessau. If you want to understand how his school shaped the city, the best thing to do after visiting the museum and the teachers’ houses is to go to the Törten settlement. Here are the houses with access balconies, which are still rented by the housing association, and the 314 semi-detached houses designed by Walter Gropius around the consumption building (today a museum).

Tips for the Elbe Cycle Route

Location: The section of the Elbe Cycle Route described here, which is about 250 kilometers long, starts in the village of Schmilka (Bad Schandau) and ends in the Bauhaus town of Dessau.

Get there: Schmilka can be reached by train from Mannheim with two changes in just under seven hours. Booking bike slots is essential.

Spend the night: Along the Elbe Cycle Route there are many hotels and accommodations that only accept guests for one night (bed and bike). The barrel-shaped pods in the Kleindröben park are particularly original (but without their own shower).

To persist: A longer stay is recommended in Torgau (Landesgartenschau 2022) and in Lutherstadt Wittenberg (360-degree panorama Luther 1517), as well as in the Bauhaus city of Dessau.

Baggage service: Providers such as AugustusTours (www.augustustours.de) offer complete tours with pre-booked accommodation, but also transport luggage from one hotel to another on request.

Information: On a separate page there is comprehensive and up-to-date information and an interactive map, as well as the possibility to order a free manual (www.elberadweg.de). Hey

Publisher Hans-Jürgen Emmerich Local publisher with passion since 1990, at Mannheimer Morgen since 2000.