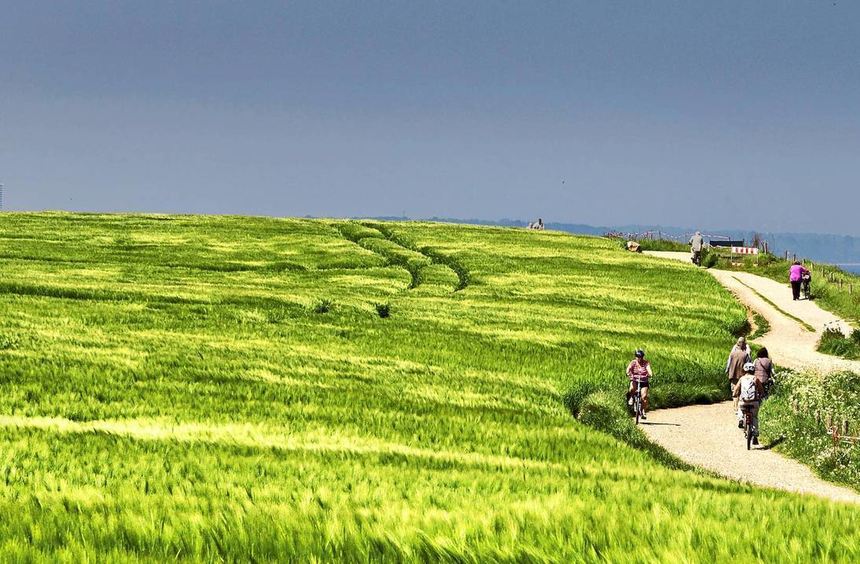 Blue sky with fluffy clouds. 22 degrees, light breeze from the southeast. To the right is the Baltic Sea, shimmering blue-grey in the sun like a huge bathtub. To the left are vast fields of corn and meadows full of wildflowers that undulate over the hills. In the middle, cyclists who roll on wide roads, sometimes with and sometimes without luggage. And when they meet, they greet each other with a cheerful “Hey.”

Summer on the Baltic Sea, a perfect time for a cycling tour in the north, for example from Hamburg to Copenhagen. The route is around 600 kilometers long, well signposted and offers beautiful destinations such as Lübeck and Prœstø, Køge and the Møn peninsula, with beach breaks in between.

At Café Vin & Brød in Maribo you can fortify yourself with a delicious panini, www.cafevinogbrod.dk. A sensational seafood buffet will be served. in the restaurant arken in Koege, www.restaurant-arken.dk. Modern Nordic cuisine at its finest: Høst en Copenhagenwww.cofoco.dk.

With the Copenhagen Card (from 57 euros) you have free entry to more than 80 attractions, www.copenhagencard.com. Guided bike routes Copenhagen through www.greenbiketours.org.

Kitesurfers spin on the waves. The beachgoers stop and watch the black figures that animate with each gust. Other tourists watch the spectacle from the beach house in Pelzerhaken, one of the new and trendy beach bars on the German Baltic Sea coast. They sit barefoot at gray-white wooden tables, order sushi or a bowl of vegetables, and let their children go wild.

Ideas to decorate a garden party

Mannheimer Morgen Plus item The portrait

On the trail of jazz: Ilja Ruf, Pop Academy student and winner of the Young Talent Award

Lübeck not only shows its beautiful old face. In the Hanseatic city’s port, people gather in casual Newport to soak up the sun, on warm summer nights soul music rocks from the beach lounge on the Trave. And if you sit on the roof terrace of the café of the great Hansemuseum, you have a fabulous view of the old town, which maintains its brick splendor but also lets in a cool breeze.

Denmark can be easily reached by ferry from Fehmarn to Rødby on the island of Lolland. The fields stretch to the horizon, bordered by rows of trees like a protective wall against the wind. From time to time, road signs indicate human settlements. “Where are the Danes?” you wonder when you tour this quiet agricultural country. Vacation?

The dragons dance in the air as if trying to catch the sun. Parents and children brace themselves against the wind in long lines. Little children are busy building sand castles on the beach. Others jump over small waves until their little legs give up and they run to their mothers on outstretched terry cloth towels. An August day by the sea between Prœstø and Rødvig, one of the many beautiful beaches along Denmark’s 7,400km coastline.

The kingdom also shows its spectacular side. Then, when the 128 meter high chalk cliffs rise above the turquoise green water at Møns Klint. The last ice age pushed them off the seabed with enormous pressure. There are two ways to experience this natural phenomenon, which has been declared a biosphere reserve by UNESCO: a wooden staircase with 487 steps leads down to the beach, or you climb a walkway to the safe edge of the cliff and enjoy fantastic views of the escarpment. rocks, which are illuminated by the sun like headlights. One has to think of the painting “Chalk Cliffs on Rügen” by Caspar David Friedrich. The rugged coastline of the German Baltic Sea island was also formed from 70-million-year-old chalk. If you want to learn more about the natural wonder and origins of Denmark, the best place to go is the Geo Center Møns Klint. Biologist Tore Stenberg guides groups through the family-friendly interactive museum. His creed: “Sea mud is the foundation of the world. We on land are just decoration.”

Prœstø and Køge are typical Danish Baltic Sea towns: with a brick church, a small market square and a small shopping street. And a marina where bands play and fish restaurants serve the full range of seafood. Sometimes you want to stay a little longer and not ride the next day. Especially when you stay with Anna and Jason Hwas-Baeraux at their Inn Between Kirseborkroen. The couple have lovingly restored the old half-timbered house in Prœstø and equipped it with bright and cozy rooms.

Breakfast is brought to your door and you can enjoy homemade jam and fragrant bread among hydrangea bushes on the small terrace. Danes and Americans have found their home here with their two children and they exude that indifference that the Danish people are said to have.

Even the entrance to Copenhagen is sensational. Far from the dangerous crowds on the main exit routes, wide asphalt strips lead to the capital. Always nice by the water with a view of the first modern residential buildings. On bridges, intended only for cyclists, it rolls totally relaxed towards the center. It’s lunch time. Workers spend their breaks in one of the port’s swimming pools or sunbathe on the dock. In Nyhavn, tourists bustle and order mussels in wine sauce at one of the bars against a colorful backdrop of houses. Or discover Torvehallerne, Copenhagen’s market. It smells like coffee. Freshly caught fish is covered in blocks of ice, fruit and vegetables are stacked on stalls, and the famous smørrebrød is presented in display cases. Salmon with avocado, caviar on hard-boiled eggs, shrimp with salad and exotic fruits are piled on white or rye bread. Each piece is a delicacy that can quickly become a daily habit.

Copenhagen is an impressive example of how a bike-friendly metropolis can be. In the last ten years, around 200 million euros have been invested in infrastructure. The cycle path network covers more than 400 kilometers. Traffic light phases are based on the pace of cyclists and at public stations flat tires can be re-inflated.