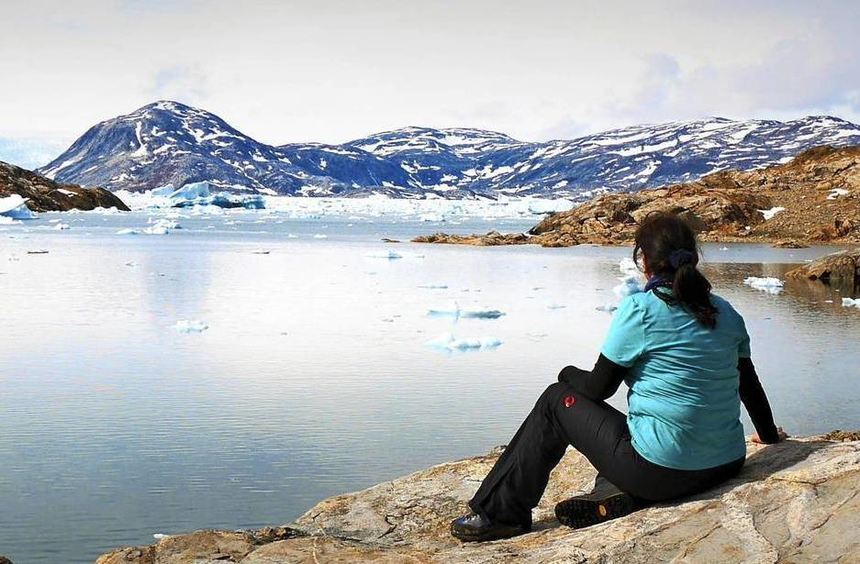 A rumble as loud as a cannon shot breaks the silence in the Johan Petersen Fjord in southeastern Greenland. Frightened, the participants of the trekking tour search the bare slopes of the mountains. What caused the explosion? A rockslide? The solution to the enigma takes a long time to arrive. After a few minutes, one of the icebergs begins to dance on the fjord: it sways, spins, and then suddenly dives for a short time. Ice water foams and bubbles. Then little icebergs burst to the surface like corks. They shimmer in shades of blue to turquoise.

Explosion leader Sebastian Franzen knows the cause of the metamorphosis: “Due to temperature fluctuations, the iceberg imploded.” He also has an explanation for the different shades of blue: “The color of ice depends on pressure. The more you compress the ice, the bluer it looks.” Since an iceberg implosion also causes tsunamis, he instructs members of your group to pitch tents on a small rise.The campsite offers an unparalleled view of the ice cap that covers 80 percent of Greenland.At the end of the fjord, like the wall of a dam, rises a mighty wall of bare ice, up to 1000 meters high, now glowing golden in the light of the setting sun “Sermersuaq”, great glacier, is what the Inuit call the ice sheet.

Arrival from Frankfurt to Kulusuk in East Greenland z. B. with Icelandair (www.icelandair.com). From Kulusuk we continue by boat to Tasiilaq.

An alternative in Tasiilaq is the Hotel Angmagssalik above the village, double room from 150 euros, www.visitgreenland.com/providers/hotelangmagssalik

Book tip Robert Peroni: “Cold, wind and freedom. How the Inuit taught me the meaning of life”, Malik/National Geographic, 15.50 euros.

Best time to travel Summer in Greenland starts in June/July and ends in September. During this time, temperatures sometimes exceed 20 degrees.

Sermersuaq is the mother of all icebergs in the northern hemisphere. Especially in the short Greenlandic summer, she continues to give birth to children, some the size of cathedrals. The sun is the obstetrician, but climate change is also playing a role. On forays through the rugged mountain world, the group sees countless icebergs trundling toward the open sea like a flock of sheep.

When hikers return to camp on the shores of the fjord in the afternoon, it seems as if icebergs are waiting there. Because then it’s low tide, so some of Sermersuaq’s children are sitting in the mud in the fjord. Some actually look like mountains: steep with sharp edges, with spikes and peaks. Others are more like modern sculptures. What they all have in common is impermanence. Cup of tea in hand, hikers watch as stranded icebergs melt, dripping and dripping, under the rays of the polar sun. Therefore, the group dubbed the section of beach below the camp “iceberg graveyard.”

The days at the Iceberg Cemetery are the preliminary climax of a journey that begins and ends in Tasiilaq. With just over 2,000 inhabitants, the place is considered the capital of the region, since only 3,500 people live on the east coast of Greenland. The colorful wooden houses seem to have been thrown at random. Painted blue, green, yellow and red, the buildings cling to the slopes of a bay in King Oscar Fjord. Robert Peroni’s house is not only red, it is also called that. The Red House of the former extreme mountain athlete is a guest house, restaurant and meeting place for locals. Born in South Tyrol, he has lived in East Greenland for more than 20 years and fell in love with it when he first arrived here in 1980. Peroni campaigns tirelessly for the Inuit, whose culture and traditions he fears will disappear in a foreseeable future under the influence of the modern western world, such as the glaciers of Greenland due to global warming. Together with Manfred Häupl, an expert in sustainable travel, the visionary Peroni developed and established a new type of soft tourism that takes into account the needs of the indigenous people of the region. “You have to take your time to understand the Inuit and their country,” says Peroni. “We owe them that.”

You can spend time with the Inuit, for example, at the Art Center. Here you can see how they make amulets with walrus or narwhal tusks. In a meadow near the port, the neighbors have chained a dozen sled dogs. Wild animals are rarely seen on this trip. Drawn by the smell of a hot meal, an arctic fox peers curiously into the kitchen tent. And on the boat trip to the former US military base “Bluie East Two”, a fin whale presents its tail fin to tourists.

In 1942, the US set up the camp as an air force base to defend Greenland from a possible German invasion. But just six years later, they abandoned the base, leaving behind not only the hangar, but also vehicles, equipment, and thousands of barrels of fuel that have been rusting away for decades. The journey through time takes about an hour. Afterwards, the participants of the trekking trip get back on the motor boat, which takes them to the next camp. With 150 hp, the little boat jumps over the waves. It traverses estuaries bordered by jagged mountains of rock, part saffron yellow and part dark grey.

The next landmark is the Knud Rasmussen Glacier. The closer the ship gets to the “ice machine”, the more the passengers feel the cold on their faces. They camped on a small rocky plateau with a fantastic view of the glacier. From time to time, a rumble can be heard that acoustically indicates that the glacier is “calving”.

The group, led by Sebastián, explores the area on day trips over the next few days. Climb the lateral moraines of the glacier, wade through frozen streams, bathe in mountain lakes whose waters have been heated in the lee of the mountains and under the summer sun. Participants rest on pads of moss fluffier than a Berber rug and traverse boulder fields lined with arctic pink willows. “Niviarsiaq”, girl, is the name of the flower in the Inuit language. Perhaps it was thanks to her that Robert Peroni claims to have discovered her love for Greenland.