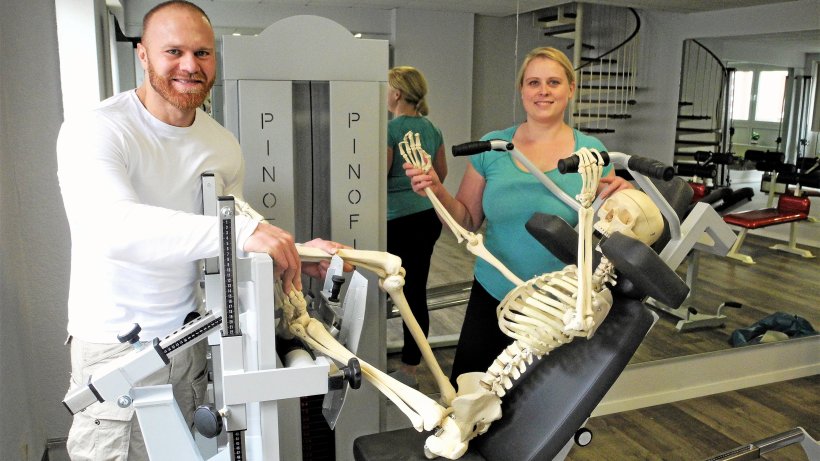 Time/Herdecke.
Sebastian Marquard and Stephanie Grote recently opened the Physioforum Ruhr. And soon they’ll have reinforcements at their practice.

Sebastian Marquard and Stephanie Grote completed their training together at the Westfalen Academy in Dortmund 14 years ago. The two physiotherapists have now opened the Physioforum Ruhr in the rooms of the former Messingfeld gymnasium at Kaiserstrasse 171, a practice for physiotherapy.

Sebastian Marquard previously worked independently at Remscheid and comes from competitive sports. “I played American football in Essen and became European champion with the German national team in 2010,” says the 36-year-old, who specializes in manual therapy in sports. “That means athletes don’t come to me for any exercises, but I work a lot with soft tissue and mobilization techniques.

This is also successful with patients with pain”, explains the expert. Colleague Stephanie Grote is from Herdecker and last worked for twelve years in the spa town of Kirchender. “I am an equine osteopath and I have adapted some techniques for humans. I like to combine the jockey and horse treatment because their problems are often related”, the 37-year-old man knows. She explains: “If a rider has back pain and as a result is sitting lopsided, they are not sitting evenly on the horse and are transferring the problem to the animal; the same applies in reverse.”

Plenty of space for a wide range of services

In their 300-square-meter practice with seven treatment rooms and a large equipment room, physical therapists offer a wide range of services. This includes lymphatic drainage, physiotherapy on fitness equipment under the supervision of a therapist, massages (wellness, sports), mud, infrared heat treatments, kinesiotherapy and manual therapies, even for so-called stress biters with CMD (chroniomandibular dysfunction, masticatory system). “As is well known, the latter can trigger tension, dizziness and much more,” says Stephanie Grote.

After a four-month renovation period, the Physioforum Ruhr opened at the beginning of the month. Physiotherapists Anna-Lisa Stein and Laura Füchtenschnieder from Herdecke will join the team in November. The office is open Monday from 8 am to 7 pm, Friday from 8 am to 2 pm, and beyond by appointment, for example, for people who work.

More articles from this category can be found here: Herdecke / Wetter