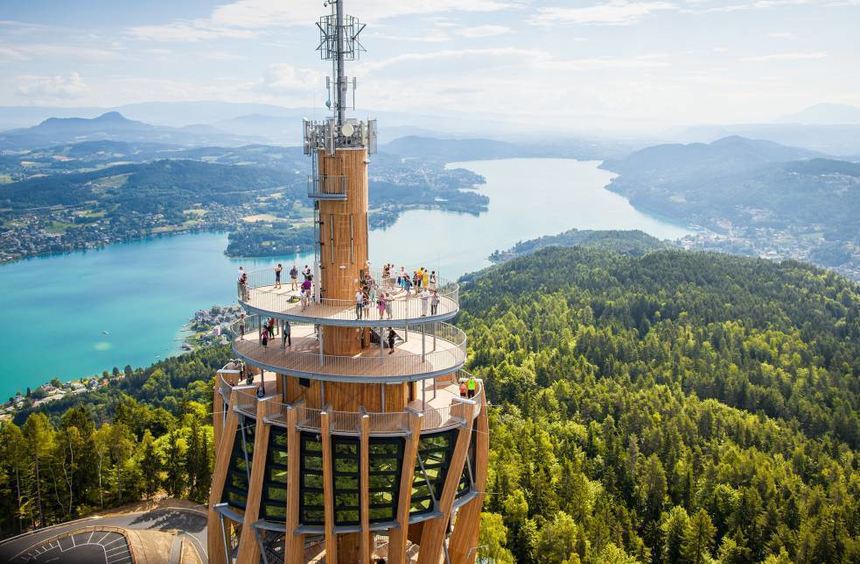 In the Alps, the Weißensee weaves its way through the mountain peaks like a nature boy. The bays of Lake Millstatt are full of legends. There is a lot of hustle and bustle in the elegant Wörthersee with gourmet restaurants and a feeling of dolce vita under the palm trees. A little further on, at Lake Keutschach, the landscape changes. It becomes quiet among reeds, stilt houses and shady forests.

happy turquoise. shiny silver Mysterious blue night. In Carinthia, the lakes dominate the play of colors. The water is always different. Sometimes it is very calm and the mountains are reflected on the smooth surface. Then he enthusiastically splashes back onto the shore. It almost seems as if each body of water has its own personality.

Sure, in many regions the lakes are lined up next to each other. But the landscape is rarely as varied as in southern Austria. The Great Carinthian Lakes Loop is a 340-kilometre circular cycle route that loops through ten lakes and two rivers in the region. Those who lead the tour alone will really notice the diversity of the lakes.

Jazz, classical music, organ music, ship sirens, a rooster crowing. There is much to hear at Ossiach Abbey. The former Benedictine monastery from the 11th century is now home to the “Carinthian Summer”. The festival is one of the most important music events in Austria.

The musicians rehearse over and over again with the window open. The tour of Lake Ossiach northeast of Villach is worthwhile for the Baroque monastery alone.

A little further up the lake at the mouth of the Tiebel you have to dismount and push. Cycling is not allowed on the path through the Bleistätter Moor nature reserve. But that does not matter. The many photo motifs on the route would have caused constant stops anyway.

In 2017, the east bank was flooded, restoring its original appearance. The less than 30 kilometers around Lake Ossiach are completed quickly. If that’s too short for you, you can continue cycling to Lake Millstätter See and can jump into Lake Afritz and Lake Brennsee along the way. Is he throwing a woman into the water? The statue of Saint Domitian in the middle of Lake Millstatt has a dramatic effect. Around the year 800 it is said that he converted to Christianity as a result of an accident in his family: his son drowned in the lake.

Domitian is said to have thrown thousands of statues, in Latin: mille statuae, into the water. The name of Millstatt goes back to this legend. However, not a single statue was found in the lake. But there are other treasures to admire in the monastery.

For a long time Millstatt was the spiritual and cultural center of Upper Carinthia, made up of Benedictine monks, noble families, knights and Jesuits. With the Millstätter manuscript, one of the most important works of early Middle Upper German literature was created here. The bikes roll through the woods, past blooming meadows. In between there are always little bays where you can cool off your feet and enjoy the view of the lake.

The connection route from Lake Millstatt to Lake Weißensee at 930 meters above sea level can be shortened on vacation. This leaves more time to discover the natural park.

The James Bond movie “The Living Daylights” made the frozen Weißensee famous in the late 1980s. In the warmer seasons, the region around the lake is a paradise for mountain bikers.

Two thirds are undeveloped. Therefore, there is no continuous path through the valley or around the lake. Cyclists can still circle the lake with the help of the Alpenperle, a hybrid electric boat. First he goes to Naggl, from there to the open-air Hoffnungskirche. Sit down, think, look at the landscape. It’s one of those places where you don’t need much to relax. Just one more intensive climb, then the bikes roll almost on their own through the Gailtal to Pressegger See. Typical of it is the great cane field with paramos and aquatic plants.

With each further kilometer, the Alps are now receding. The valley widens, the landscape becomes more beautiful. The change of scenery is marked by the turquoise Faaker See and the Karawanken mountain range, including the Mittagskogel, whose pyramidal cone is reminiscent of volcanoes. On the 46-kilometre-long castle circuit around Lake Faaker See, he often brakes in surprise to get his camera out.

A short, steep ascent to the Kanzianiberg leads to the ruins of Finkenstein Castle. The mighty castle was built in the 12th century. Today the castle arena is used for outdoor concerts and is a popular destination. It is currently undergoing renovations and is scheduled to reopen in mid-June.

The castle tavern and courtyard with panoramic views are open to the public. As long as the calves can still handle the steps on the rocks. Four days of cycling leave their mark. So it’s time for the flatter side of the lake loop.

Cycling around Lake Wörthersee is a must. After all, it is the largest and most famous lake in Carinthia.

The approximately 50 kilometers with a detour to Lake Keutschach, whose stilt houses are a UNESCO World Heritage Site, are not difficult thanks to breaks: Selfie in front of Velden Castle on the west bank, detour to the 70-meter Pyramidenkogel wooden lookout tall tower, then eat ice cream on the Pörtschach promenade on the north bank, lunch break under the palm trees in the east bay of Klagenfurt, on the way back on the south bank a visit to the pilgrimage church of Maria Wörth and a sunset between water lilies.

If you leave your towel at home, you will regret it. Bathing suits are part of the basic equipment on a Great Lakes Loop bike trip, whether you’re paddling with your toes in the river water or swimming. In addition to the ticketed lidos, there are also smaller public accesses to numerous bathing lakes. They are marked with a yellow sign and lifebelt and can be used free of charge for a short dip in the water.

On the last day of our trip, the bicycles roll almost alone through the Rosental. The route is determined by the Drava River. From Villach to Lake Klopeiner See, the route is always slightly downhill. On stage, he walks through the Celtic world of Frög, an open-air museum from the Hallstatt period (800 to 500 BC).

During the coffee break at Rosegg Castle, a forger comes into play. In the 19th century lived Peter Ritter von Bohr, businessman and inventor. It wasn’t always clear where his money came from. In any case, Bohr printed banknotes on a large scale at Rosegg. At some point they caught him. He ended up in prison and in the history books, as the biggest forger in Austria.

Sometimes an intrusive hum can be heard on the side of the road. These are the Carnica bees that have been native here for centuries. There is even a museum dedicated to the bee, which is located in Ferlach, near the Ferlach reservoir. The further south you go, the wider and more lake-like the Drau becomes.

Natural bays alternate with small ports and rest areas on the shore. There is a waterfowling hut in Dragositschach Bay next to the bike path. Cranes, swans, herons, ospreys and moorhens appear.

The immensity of the water seems calm. Shades of blue are relaxing. Deeply relaxed we go to the next lake.