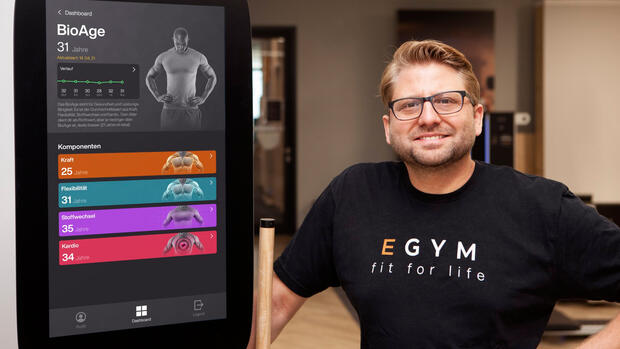 Munich With the pandemic, the health of their own employees has become increasingly important for many companies. “We are registering a demand from gym companies for their employees that is three times higher than before Corona,” says CEO and co-founder of Egym Philipp Roesch-Schlanderer. “A billion dollar market is emerging.”

The startup, known for its digital networked fitness equipment, wants to become the European market leader in corporate fitness. In addition, the Munich-based company takes over French competitor Gymlib for an amount in the double-digit million. It is Egym’s largest acquisition to date.

Until now, the equipment specialist has been active in the corporate fitness segment with its subsidiary Qualitrain. So far, framework agreements have been concluded with some 3,600 companies. For around 50 euros a month, half of which is paid by the employer on average, employees currently have free access to 5,500 studios across Germany.

In France, Gymlib is the market leader with a similar business model, with a customer base of 600 companies and a network of 4,300 fitness facilities. “To continue our growth in an increasingly competitive European market, we were looking to partner with a leading player in the industry,” said co-founder and CEO Sébastien Bequart.

According to industry estimates, the so-called corporate wellness market in Germany and France is likely to have a volume of 2.5 billion euros. Worldwide it is 51 billion euros. Experts expect an average annual growth of seven percent until 2027.

All of society benefits when people play sports, Roesch-Schlanderer said. “The treatment of back and spine problems alone costs around 40 billion euros each year.” The system is designed to treat health problems, not to prevent them.

That’s why I originally wanted to work with health insurance companies. “But they don’t have the incentives to systematically invest in prevention.” Employers are therefore the best cooperation partners, incurring billions in costs each year just for sick days.

>> Read about it: These companies promote the health of their employees in an exemplary way

Studios could also use additional clients. The fitness industry has had an extremely bad 2021. According to a Deloitte study, due to the coronavirus pandemic, sales fell by 46% to €2.2 billion. Membership fell by ten percent to 9.3 million. In 2019, 14 percent of the total population was still enrolled in fitness studios, but at the end of last year it was just eleven percent.

Now things should go back up. “The need to catch up on fitness and health services has never been higher than it is now, two years into the coronavirus pandemic,” said Birgit Schwarze, president of industry association DSSV. According to a study by the German University for Prevention and Health Management, many people gained significant weight during the pandemic.

It is a good thing for the industry, and therefore also for Egym, that only a few studios have had to close. The number of facilities fell just 0.5 percent to nearly 9,500 fitness facilities. On the one hand, this is due to the comparatively high proportion of long-term annual contracts, said Karsten Hollasch, a partner at Deloitte. “In addition, there are government relief measures and financial reserves built up from previous years.”

Egym wants to grow by 50 percent

Despite the industry downturn, Egym raised $41 million from Mayfair Equity Partners in a Series E round last year. Overall, investors have invested more than $150 million in the company.

With programmable devices, Egym has been on a growth course for years. If a customer logs in, the machines automatically adapt to it. With the help of an app, customers and trainers can create training plans and document progress. The data can be uploaded to the cloud and analyzed there.

In the first shutdown, the startup went through its first restructuring: 100 of the 450 employees had to leave. “But it quickly became clear that many studios are willing to invest in technology even during the crisis,” says Roesch-Schlanderer.

One reason for this: Competition from home fitness equipment has grown significantly. If users have a digitally connected bike at home that is personalized to them and on which they can then analyze the data, they don’t want to be on an old-fashioned stationary bike at the gym. “Going to the gym is still the most popular sport in Germany,” says Roesch-Schlanderer. But only studios that have made it to the digital age can keep customers and win new ones.

>> Read more about it: Peloton Tread: What is the hyped fitness treadmill really capable of and how dangerous is it?

Egym was able to keep sales stable at around 80 million euros last year despite the crisis in the sector. “This year we want to grow 50 percent, probably even more,” says Roesch-Schlanderer. Sales of the acquired Gymlib are not included, which according to industry estimates should be in the double-digit million range.

Roesch-Schlanderer also admits that the purchase price in the high double-digit million range is quite generous. But the French have recently grown at rates of 80 percent and are a perfect match for Egym, so the price is justified. “It’s a dream wedding.” Egym shareholders were also willing to inject fresh capital for the acquisition.

The industry is likely to keep moving. Deloitte recorded 19 major transactions in the European market last year. JP Morgan and Ben Oldman Partners took over the majority of the Spanish operator Forus. In Germany, among others, Waterland Private Equity acquired Fit/One, which operates 30 clubs. Roesch-Schlanderer can also imagine new acquisitions.

Plus: Get Your Sports aims to be the Airbnb of the fitness industry