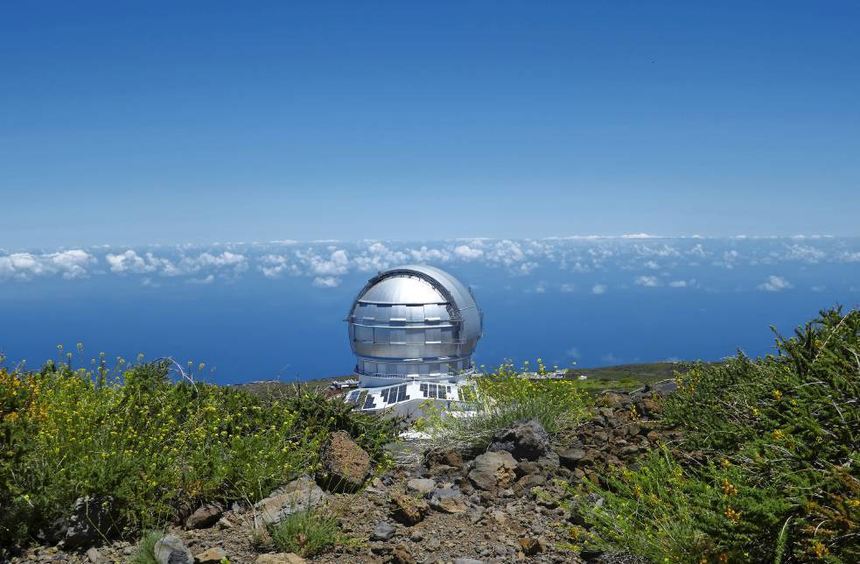 It is very dark for a moment. The shuttle bus turned around and made the long, winding journey to Breña Baja. Night visitors to the Astronomical Viewpoint have turned off their lights after climbing the stairs to the stone circle. A little later the eyes adjust and the darkness no longer exists. A narrow crescent moon illuminates the landscape, silhouettes of trees can be seen, as can star guide Antonio Gonzales and his telescope. That looks directly at the moon and gets it so close that you can count the craters individually.

Next, Antonio brings a cluster of stars into view: “Omega Centauri, you don’t see that in Germany, the balloon gets in the way,” explains Palmero, 50, who, in addition to a few semesters of physics, has completed numerous courses for become an astronomical guide. He is the initiator of the 14 stargazing sites on the island, all of which are equipped with a fixed north star arrow that includes distance information (a good 4 quadrillion kilometers!) as well as star charts. and information panels.

study of the stars

The Roque de los Muchachos observatory and visitor center, as well as the astronomical paths and observation stations can be found at www.starsislandlapalma.es/de/

Because La Palma is close to the equator, you not only see some other images of the sky than in Europe, the usual ones look different, they are crossed or upside down. Therefore, Antonio shows the constellations to his group: first he shows the position in which Hercules or the Virgin are placed in the sky, then he traces the outlines of the constellations with the laser pointer. And then the Milky Way appears: millions of diamonds on velvet black as night. Although the cold has been getting into the bones for a long time, the vision of the universe is so fascinating and Antonio is so intoxicated with his enthusiasm that the astronomers only say goodbye to space after midnight.

Biblis does not take advantage of opportunities

The location of the westernmost Canary Island in the Atlantic is brilliant for sky researchers. This was recognized on the island and laws against light pollution were passed early on. The lights have to be yellow and shine downwards, air traffic cannot fly over the island, but only to the east coast and away from there again.

After nine o’clock at night there is a ban on night flights and industrial companies can only settle below 1000 meters. In 1985 the observatory of the same name was built on the Roque de los Muchachos and in 2012 La Palma received the title of Starlight Reserve from UNESCO.

The path to Roque de los Muchachos, the highest point on the island at 2,426 meters, is arduous. The road, battered by wind, weather and rockfall, winds in endless curves to the remains of ancient volcanic chimneys on the edge of the Caldera de Taburiente.

Another spectacular steep face and a few curves beyond the first telescopes appear. 23 of them populate the plateau decorated with white and yellow gorse, some bright silver and domed, others angular and unspectacular. 340 clear nights are recorded here a year, because the observatory is almost always enthroned above the clouds.

First, head to the brand new Roque de los Muchachos visitor center. Another man has found his dream job here: star guide Michael Fuentes is in his element as he guides through “her” center of him. “Explaining to visitors the connection between man and the universe is the best,” he enthuses, as he walks through the interactive exhibit, which you could spend hours on. He then heads to the actual lab, first to the Magic 1 and 2 telescopes, which look totally futuristic and reflect the landscape upside down. Two of them form a pair of eyes, which are used for indirect observation of gas nebulae, for example, and which can detect gamma rays at lightning speed. They are named after Nobel Prize winner Pavel Cherenkov, who investigated this radiation.

The Gran Tecan, currently the largest telescope in the northern hemisphere with a mirror diameter of 10.4 meters, stands out in every respect. The telescope, including its mount and instruments, weighs about 400 tons and can be easily moved by hand on an oiled turntable. During the day the telescope is checked in its 49 meter high room and prepared for the night. In the late afternoon, the huge garage door at the head of the dome opens and offers a clear view of the space or, more precisely, of its past, because the large and bright mirror allows deep views, that is, very deep. back in the past of stars and galaxies Benjamin Siegel is happy to be asked about the intricacies of this technical wonder. He came here as a young machine builder from Freiburg 20 years ago rather by chance and is responsible for supporting the telescopes on La Palma and Tenerife, another rising star in his job. It blows quite a bit outside, but the sun heats the lava in Roque de los Muchachos National Park. Purple buglosses, a good meter high, stretch towards the sun, under a white soup of clouds it swims between black peaks of lava. The bees buzz and the immensity of the sea is again limited only by America. A blue-breasted lizard scurries away. You really are pretty close to heaven up here. There in Los Llanos there are celestial phenomena as an earthly pleasure: Pedro Hernández, the patron of the Duende del Fuego, designed a star menu that traces astronomical motifs. His tortilla represents the sun, a skewer of vegetables and chorizo ​​represents the asteroid belt, and a layered colored gazpacho represents the Leia Nebula. Like many hosts on La Palma, he trusts tourists who come for celestial phenomena, not hellish volcanic eruptions.