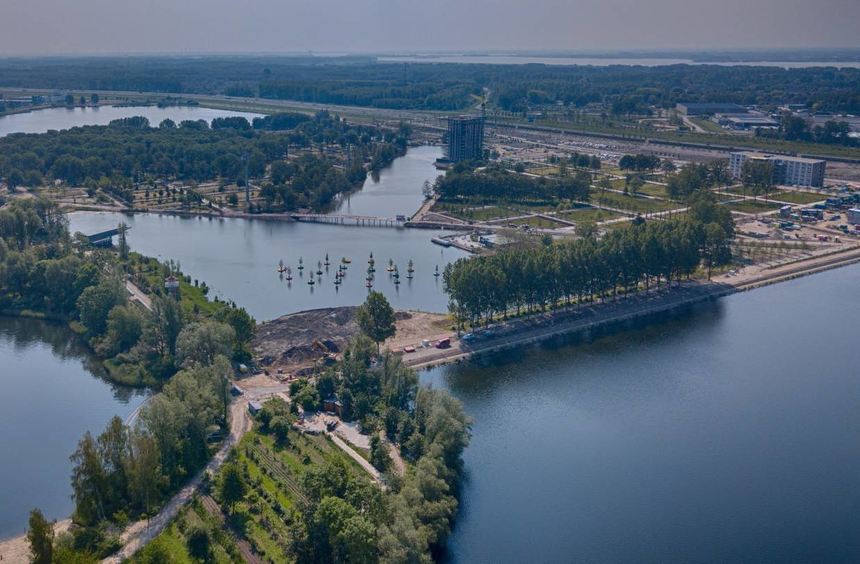 Under the infinite sky, the streets seem to stretch to infinity. Clouds build up into dramatic formations, reflected in the water.

Here in Flevopolder the land is even flatter than usual in the Netherlands, the sky is even wider, the light is even brighter. At the southwestern tip of the artificial island is Almere, with around 220,000 inhabitants, it is the youngest city in the Netherlands and is barely 50 years old. The land on which it stands was reclaimed from the water, making Almere a symbol of the struggle against the forces of nature.

At the same time, it is a green city, surrounded by nature parks and the Markermeer, IJmeer and Gooimeer. Almere is the scene of the Floriade Expo 2022 until October 9.

The International Horticultural Exhibition is held every ten years in a different location, this year with the theme: “Growing Green Cities”. The Floriade is more than a colorful spectacle of gardens from around the world. It is a fair of ideas for the future: How can our cities be more liveable, greener and more sustainable in the face of climate change?

In the distance the skyline of Amsterdam

There is hardly a better setting for this than Almere. It is a green city, but it is also a blue city. Here everything is surrounded by water and a strong sea wind blows almost everywhere. It twirls your hair, lets you pedal the “fiets” (the bike), and blows new thoughts into your head. Almere is crossed by canals and is a paradise for lovers of water sports. In the distance you can see the Amsterdam skyline.

Just a few minutes’ walk from the train station is Lake Weerwater in the center of town. Students sunbathe on wide wooden pontoons, employees relax on the new city beach during their lunch hour. Right next door is the Kunstlinie theatre, which seems to be floating on water. The water and the clouds are reflected in the glass facade of the building.

“We are five meters below sea level here,” says Paul Meekel. Guide visitors through the city, showing them the spectacular but also the understated. Like an irregular line on a facade. Indicates the height of the sea level. This is a very subtle reminder to people that this place of residence is anything but normal.

This is nothing new for the Dutch, about 40 percent of their country is below sea level. But in Almere everything is even sharper. There was water here until 1968. The Zuiderzee, the South Sea, once stood here, an extension of the North Sea. For centuries, towns and islands have been at the mercy of violent storms and floods. The floods reached the gates of Amsterdam. At the beginning of the 20th century, it was decided to drain the Zuiderzee. A part became today’s IJsselmeer. Another part was drained, polderd.

Designed on the drawing board, Almere has become a playground for top architects. Dutch star architect Rem Koolhaas designed the center. It has three floors. Next are parking lots, roads, separate bus and bike lanes. Wide escalators lead from the underworld to the shopping center, the beach and the impressive residential towers. Upstairs, on the green, slightly hilly roofs of the shops, are terraced houses with idyllic little gardens – you almost think you’re in Teletubbyland.

The neighborhoods were built according to the needs of the citizens: “Duin” (dune), for example, is an artificially constructed dune landscape with a marina and a promenade. In the Oosterwold Eco-District, people live sustainably and grow their own food.

A new city for Floriade: stays

And Almere is growing. From City Beach you can already see the outlines of the newest district: an attractive green jungle called “Hortus”, which means garden. But before new residents move into the district, around two million visitors are expected to Floriade Expo. The site at Weerwater Lake can be reached by car, bus, bike, or boat from City Beach.

“This Floriade is unlike any other before it,” says Niek Roozen, the Expo’s landscape architect. For the first time it is not just a trade fair that will be demolished after half a year. “We are building a new city.”

All the infrastructure remains, says Roozen. This is sustainable and adapted to climate change. The architect highlights, for example, the wide sidewalks, which are arranged in such a way that rainwater can run off quickly.

The entire 60-hectare site has been divided into squares and planted alphabetically by the botanical names of the plants. The T, of course, is reserved for the tulip, of course, the result is a patchwork quilt from gardens, crossed by canals with bridges made from recycled materials. “You’re going to want to live here later, right?” asks landscape architect Roozen.

New forests were planted. In the food forest, for example, you only find edible plants. The forest on the water is very special. Recycled buoys have been planted with trees that casually float in the water. There are also floating podiums and stages for the cultural program.

A journey through the gardens of the world

A good 30 countries set up their own pavilion in which they present their ideas for the green city of the future. The Expo is like a journey through the gardens of the world. The Netherlands shows how you can build sustainably and climate-friendly with organic products. China invites you to take a tour of a growing bamboo garden. India takes visitors on a spiritual journey. In buildings similar to Sugar Loaf, Qatar demonstrates how traditional forms and modern techniques can be used to green deserts.

Hundreds of exhibitors show modern gardening techniques and ideas for climate protection at home. Exciting new materials are introduced, for example airplane seats made from pepper stems or leather made from mushrooms.

Can you see everything in one day? Unlikely. Fortunately, you don’t have to walk all the way: a 850-meter cable car runs from one end of the Floriade to the other.

From the gondolas there is a fantastic view of the terrain floating like great enchanted islands in Almere’s Weerwater. On the other hand, the modern city skyline rises, nature flourishes and proliferates below.