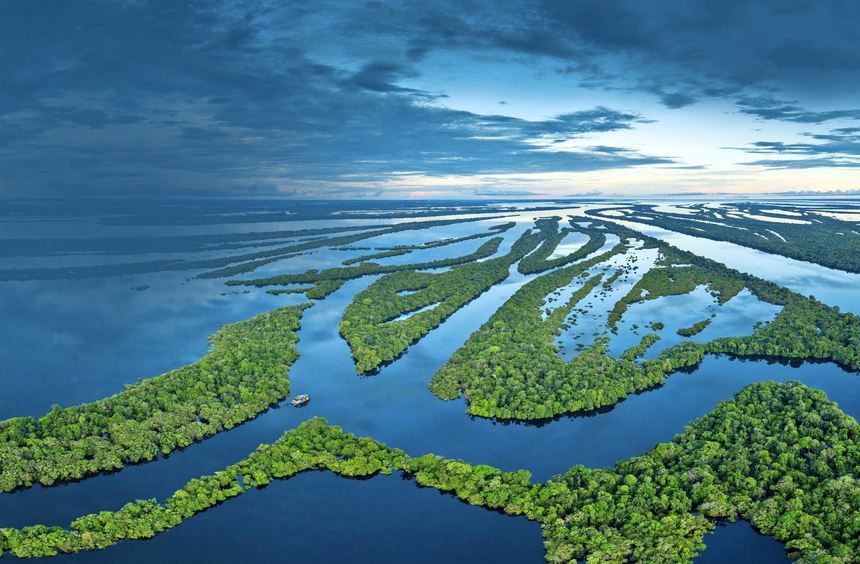 Before the tourists arrive, Francis Vaz (38) draws patterns on his face, puts on the parrot feather headdress and puts on a loincloth. A strip of cloth hangs down from the navel, and freshly cut twigs cover the elongated back. “I am the head of the community of the town of Cipia. In the Tucan language, that means ‘happy people’”, says the Brazilian.

Vaz and his 40-member tribe have set fire to bowls of tree sap in the palm-roofed meetinghouse. The smell is reminiscent of incense. They make music and dance by the light of the fire. The instruments are self-made: the cane panpipes provide the melody, the shells of seeds sound on the ankles. “People get paid for the show, it’s their main source of income. They used to be hunters, fishermen and gatherers,” says Peter Hagnauer (59). The tour guide, who comes from Switzerland, accompanies the trip and translates from Portuguese English doesn’t get you very far in the Amazon region.

I fly with Lufthansa far frankfurt after Sao Paulo, www.lufthansa.de. Continue with Latam after manaus in brazilian junglewww.latamairlines.com.

The trips in “La Jangada” in the German-speaking countries are organized exclusively by the organizer from Berlin. Learning Idea Adventure Travel offered. A 6-day Amazon River cruise can be combined with visits to Rio de Janeirotowards marshland and Iguazú Falls. The 18 day journey”river crossing Amazonica” costs from 7420 euros per person including flights. The Great Expedition “1000 Miles in the Amazon” from to manaus to/from Tabatinga cost as 16 days trip with 13 days river crossing from 6620 euros per person flights included.

The town of Cipia is a good hour’s speedboat ride down the Rio Negro from Manaus. The people here maintain their old traditions and yet have made it to the 21st century. “Every day I wear shorts, a T-shirt and flip-flops,” says Francis Vaz, “just the necklace, I always have it on.” He proudly says that he personally pulled all eleven threaded alligator teeth from the animals. he killed.

“It was good, but the food did not taste good”

Former chief Domingo Vaz (60) also dressed in a traditional way for the visit. Vaz senior is happy with the visitors from Europe and tells how he himself flew over the Atlantic Ocean in 2016. “We were invited to Paris by a French anthropologist. It was nice, but the food did not taste good, “says Vaz junior. “There were no hot sauces or cassava flour, “adds his father.

Four years ago, the tribal leader passed the job on to his eldest son. Since 1992 there has been equality in the jungle, so Francis Vaz’s first-born daughter, Minon, can eventually be boss, if she so desires. At the moment, the 15-year-old continues to go to school and, like the other children, is picked up by the school boat at 5 in the morning.

Speaking of which: Peter Hagnauer urges the game. The boat, which serves as an auxiliary and excursion bus, takes you back to the ship. Thanks to the draft of only 1.40 meters, “La Jangada” is tied to some trees that appear out of the water. Anyone familiar with Europe’s river cruises will be amazed at the boutique ship’s shape: not a long, white flounder with a pointed prow, but a houseboat, three stories high with a flat roof and wraparound balconies. “There is only one bridge in the Amazon, and it is high enough for us to go under,” says Bernard Ramus.

The 73-year-old Frenchman from Perpignan has fulfilled a dream with his houseboat. “’La Jangada’ is inspired by Jules Verne’s novel of the same name, which I read as a child. It’s about an 800-kilometre journey on a raft down the Amazon,” says Ramus. The €1.44 million vehicle built in 2019 is not based on tree trunks, but sits on a catamaran. 15 members of the crew look after 25 guests.

The “La Jangada” drives to the village community of Cipia about once a month. Bernard Ramus took years to build a relationship of trust. He not only wants to show his guests the rainforest, but also allow them to meet the people and animals that live there.

The Amazon region is a fascinating treasure of nature. But the marvel is threatened: by the chainsaws of the loggers, the fires of the ranchers, by the construction projects of roads, dams, hydroelectric plants. Brazil’s controversial president, Jair Bolsonaro, sees untapped economic potential in the Amazon and wants to open up even more land for agriculture, mining and energy production. A threat to the entire planet: the Amazon rainforest stores significant amounts of carbon. It is considered one of the tipping elements that can unbalance the global climate. “We try to make our guests aware of the issue”, says Raphael Rocha Sá, one of the guides of “La Jangada”. The protection of the Amazon is one of the most important tasks of humanity.

The ship is practically alone on the Rio Negro. Only from time to time does a small motorboat pass by. Sometimes there is a hut on stilts on the shore. Otherwise, you can see the black water, the blue sky and the green of the jungle for hours.

Amazonia is half land, half water. During the rainy season, the river is particularly wide. In some places it reaches up to 14 kilometers, comparable to the maximum extension of Lake Constance. At night the animals give a concert: the insects chirp in unison. There are also some soloists: howler monkeys and screeching parrots. When they disembark in the Anavilhanas National Park, Victor appears, a taciturn boy from another indigenous tribe. Armed with a blowgun, he leads the group through the oppressive humidity of the green hell. Without him, you would have been hopelessly lost. The weapon is not used and visitors are saved from an encounter with poisonous frogs, tarantulas or a jaguar. But you see a lot of ants. “The little ones are useful. If you rub the animals’ skin, it drives away the mosquitoes,” says Raphael Rocha Sá, clearing the way with his machete. A sloth hangs from the ceiba tree and lazily peers down. Squirrel monkeys come down unsuspecting from a Tucuma palm and picking up the bananas they have brought with them. Hidden high in the mighty canopy of the rainforest giants lies a grey-feathered betrayer. His call is reminiscent of a party horn and is meant to warn to other animals: Watch out, bipeds! “Bush Captain” is Screaming Piha’s nickname. That sounds good, but it has serious undertones: “Capitão do mato” were the names of people who hunted runaway slaves.

Mannheimer Morgen Plus item glitter “By the way”

From the big city to the jungle