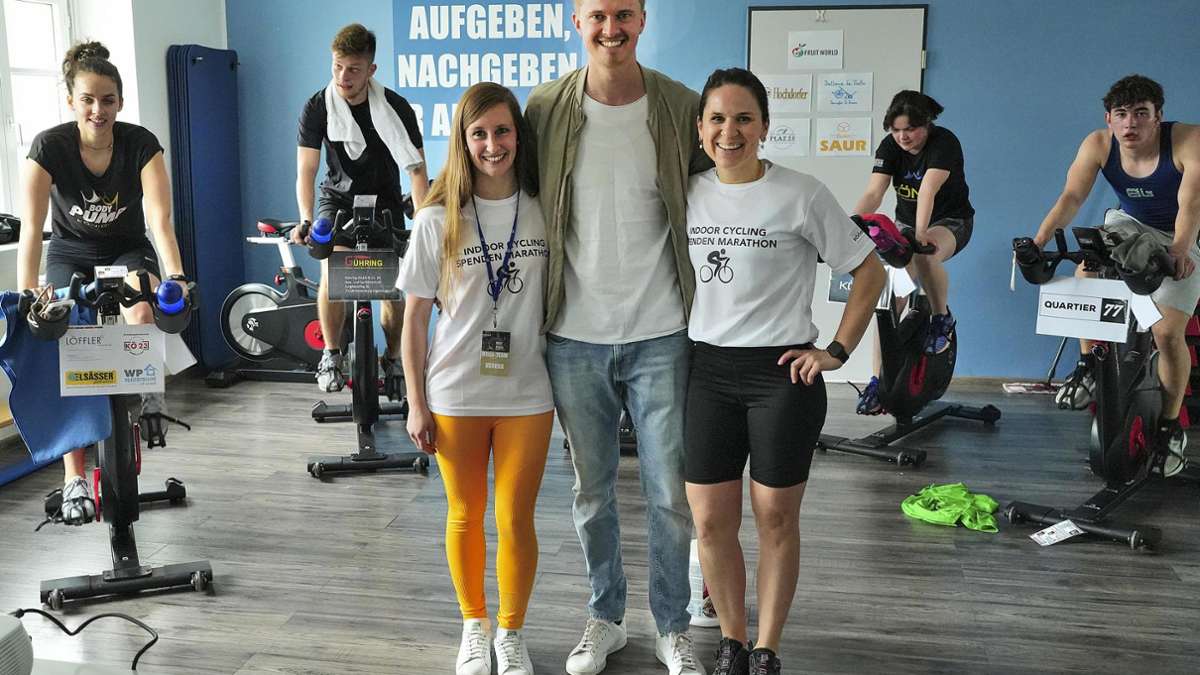 Participants pedaled hard in the twelve-hour donation marathon for the benefit of refugees from Ukraine, which was organized by the König Health and Fitness Center.

Horb – “Well, give it your all again, we’ll take care of this slope, too,” bike instructor Veronica Müller encouraged the eight athletes, who sweatily tormented themselves over an imaginary route that was projected on the big screen in front of them by beamer . They have been pedaling for almost an hour for a good cause and it should not be their last effort.

The goal was to keep the pedals and flywheels of eight indoor cycling machines moving for a full twelve hours in this sporting event and cover as many kilometers as possible by the end of the day.

From 8 a.m. to 8 p.m., eight teams pedaled nonstop for a good cause. Teams of up to ten people shared the marathon among themselves. So each team operated a bike and was tasked with keeping it moving for 12 hours. Each team drove with their own team jersey for a sponsor and collected a donation for each kilometer driven, which went to the Ukraine Aid of the Freudenstadt District Office.

It was a sporting challenge that demanded a lot from the approximately 60 athletes who took on this task. In addition to the youth fire brigade team from Talheim and the body pump group from König, an old mixed team also competed to ride together for a good cause. “A good deed a day” was the motivation of a young woman and a gentleman from the veterans team brought the aspects of fun, health and community to the considerations of why one exposes oneself to such difficulties.

After twelve grueling hours, the sponsor team “Motteler Energie Horb” crossed the finish line with 417 kilometers covered. This was not really a surprise considering that the team was made up of top level coaches and athletes. Second in the general classification was “Gerd Brauns Kettensprenger” with 401.8 kilometers on the clock. With 352.2 kilometers, the “AHG” team finished in third place. Behind the top three teams were Guhring Heiz- und Sanitarytechnik Ergenzingen (346.1), Kö 23 Horb, Ralf Wohnplan and painter Löffler Starzach (336.8), König (322), Quartier 77 (299.2) and Reck +Gas Horb (257.2) a.

The organizer was able to gain the companies “WP-Objectberatung Horb”, “Elsässer GmbH Sulz” and “Schömig Plan Kleinostheim” as additional sponsors.

The Fattoria La Vialla Speisekammer Horb, the Saur, Horb and Platz bakeries from Eutingen and Feinkost Cengiz from Eutingen provided generous support for the drivers’ catering.

The amount of the provisional donation is 3,929.60 euros

In total, an impressive 2,732.3 kilometers were put together in this twelve-hour marathon. The amount of the provisional donation is 3,929.60 euros, although some sponsors have already announced that they will round up, so the final amount is not yet certain, but it should far exceed 4,000 euros.

After a successful round trip, the spaghetti bolognese was eaten together at the end of this charity event, because pasta is known to be the best way to fill empty energy tanks, and eating together also strengthens the sense of unity among the athletes, who are celebrating an event worth imitating on this Holy Saturday met