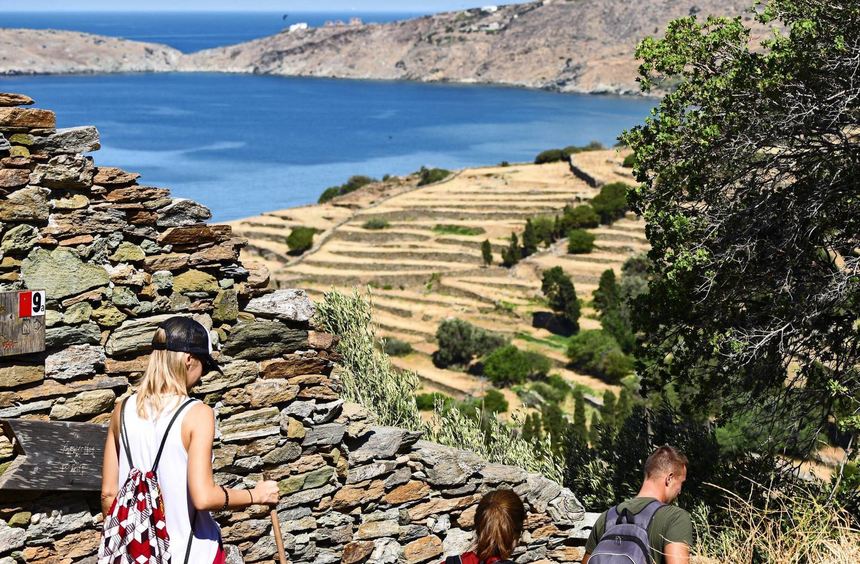 The puppy is a bit sausage and chubby. Thus, he is christened Nikos Sausage, Nikos Wurst, as he unsuspectingly accompanies the trek to the remains of Paleopolis, the ancient, first capital of the Greek island. It is one of about 20 hiking trails that have been laid out on Andros by the enthusiastic voluntary initiative “Andros Routes”, partly on old donkey trails. This network of approved and well-signposted trails now covers some 200 kilometres, covering the island with its varied landscape and making it an Aegean walker’s paradise.

It leads, for example, to the beach with remains of antiquity, to old stone bridges, to a monastery castle and to many other historical remains, also from the time when the Venetians were on Andros. And he goes through the mountains, to waterfalls, agricultural areas and steep cliffs. What makes it so special is that each trail has at least one sponsor, the so-called angels of the trail, and some of them will also be present on the hikes.

Arrival flight from Stuttgart to Athens with Aegean Airlines, https://en.aegeanair.com/ Andros Island can be reached from the nearby port of Rafina in about two hours with various ferries, e.g. B. with www.feries.gr/de.

Activities The website www.androsroutes.gr/en/ has hiking maps for day trips and more information about the Andros hiking initiative and a 100km project.

Although Andros is the second largest island in the Cyclades and the Gavrio ferry terminal can be reached in an hour or two by ferry from the port of Rafina on the mainland, it remains an exclusive tip to this day. Mass tourism as in other Cycladic islands like Mykonos or Santorini does not exist on the beautiful beaches. On walks you usually just have to share the island scenery with a few other tourists, or unexpectedly with a dog.

Also on the way to Paleopolis beach there are no other people on the way. Only a few goats complain. A rooster crows tirelessly as you gaze across the bay and past agricultural terraces to the deep blue of the Aegean. Leading the way is the angel of the path Tzeni Kollia, who introduces her path and explains that she landed on Andros out of love. And that, as a graduate aeronautical engineer, she now works as a teacher and wedding planner, and also hikes. She briefly stops at a small spring with cold mountain water – it’s time to cool off with clear mountain water. Nikos Sausage splashes around briefly too and is ready for the last few meters to the deserted beach.

“Paleopolis was founded in the sixth or seventh century BC,” he says. Due to a strong earthquake, the city sank into the sea in the 4th century AD. C. and since then it has remained off the coast. Consequently, there is hardly anything to see, at most a few stones that protrude a little from the water. One would need to snorkel or dive to explore the remains more deeply. Nikos Sausage doesn’t care anyway. It drops into the water briefly before climbing stairs and narrow pathways across the bay to the starting point, disappearing as quickly as it appeared.

Yannis Tridimas accompanies the next hiking trail, this time to the north. The athletic, wiry Greek has lived in England since the early 1970s, where he knew his British wife of more than 50 years. However, two years ago, he returned to his home island. “When he was a child, there were sheep here, as well as fields of wheat and oats,” the 77-year-old recalls on his “Wanderweg 14”. The rocky landscape is largely covered with grass and bushes. Pink flowers add pops of color. The Profitis Ilias mountains rise in the background. But the goal is below: the Ano Gavrio valley, which is so densely covered that the trees provide welcome shade in this almost forgotten place. After all, only a handful of people live in the area today. Before, more than 20 water mills worked, of which today only ruins remain. Despite his age, Yannis is quick and agile, climbing as a young man over the ruins of buildings, whose past he can tell as much about as life on the island at the time. The former engineer continues to find details about the mills. In Yannis’s case, the journey is special because of his personal connection. Here he was already walking his donkey along the trails at the age of eight, decades before they were designated as hiking trails. Years later he was one of the first members of “Andros Routes”.

Unlike the deserted Mühlental, you get to know everyday life on walks at the other end of the island, in the southeast. There is the capital Chora with the typical whitewashed cube houses on a promontory. It is a good starting point for excursions to the port of Ormos Korthiou or the village of Menites built on the side of a mountain. A simple circular route also leads through four villages. “The stone bridge here dates from the 17th century,” says Gerard Kramer, who now accompanies Andros Routes.

Then the walk with the Dutchman leads along fields and gardens. The bamboo sounds in the light breeze. Figs, oranges and capers grow. Twisted olive groves alternate with cypress and lemon trees that were once a great export. “Here is one of the flat areas of the island, suitable for agriculture,” says Ruta-Ángel. Five years ago, she left his old life behind: after a hiking holiday on Andros, she first partially and then completely moved to the island. “The Andros virus hit me hard back then,” the 66-year-old former insurance broker enthuses. “The beauty of the island plus all the hiking opportunities – it felt like the puzzle piece of my life that I had been searching for a long time.” After exploring the island on walks, you can see why.