People who primarily work with display screens often have head and neck problems, as well as eye problems caused by fatigue. A DHfPG undergraduate thesis examined whether training using specific eye muscle strengthening and relaxation has a positive effect on these symptoms. 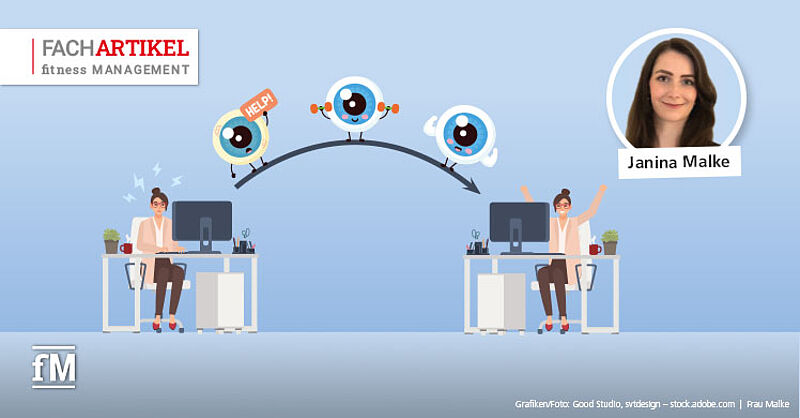 According to the Federal Statistical Office, he already worked in the year 2015 approximately two-thirds of all employees between the ages of 25 and 54 in front of a computer screen (Jaschinski & König, 2015, p. 3).

Due to the The corona pandemic grew the proportion of working hours dedicated to the home office is also clear. Through this pink probably not only them Screen working time in generalbut those daily exercise decreased at the same time clearly: this was stated by 44 percent of the people surveyed in a forsa study conducted by the DAK (2021) .

However, it is already known that Working with display screens leads to short-term and long-term health problems in the eye area, as well as in the neck and shoulder area. (DGUV, 2015). Also, it can increase due to computer work. visual problems see how computer vision syndrome (CVS) (Rosenfield, 2016, p. 1).

To counteract these symptoms, those affected can also visit an ophthalmologist or optician additional eye training since it can improve the vision itself (American Optometric Association, 2007; Angart, 2018, p. 21).

This eye training consists of different exercisesthe from the field of neurotraining originate, and must for the specific improvement of vision contribute. Eye training is divided into four componentsthe all trained equally it should be used to improve vision comprehensively and thus also reduce symptoms.

That goal The investigation was to find out if Eye training and eye relaxation. in people with sedentary work in front of a computer screen has positive effects on head and neck pain, as well as on CVS.

For this purpose Thirty subjects with CVS recruited and then 15 each from control group (KG) and intervention group (IG) randomly assigned, taking into account a homogeneous distribution by gender.

Both groups were before the beginning and after the end of the ten-week intervention phase tested to the CVS status quo and head and neck pain in the context of office work capture. These tests were identical for both groups and were based on standardized questionnaires.

Of the CVS Questionnaire (Segui, Cabrero-García, Crespo, Verdú & Ronda, 2015) made it possible Recording of the frequency and intensity of the various symptoms., for which ia also include headaches. Of the Neck Disability Index (Jorritsma, Dijkstra, Vries, Geertzen, and Reneman, 2012). Information on the appearance, intensity and duration of neck disorders.

Unlike the CG, the IG took one test between the two tests. ten week eye training part.

Toward trained components i counted them eye movement (for example, convergence and divergence), the visual acuity when seeing static and moving objects in near and far vision, the depth perception just like him peripheral perception.

furthermore, the eye muscle relaxation it was also trained using various exercises and was also used as a “reset” between the other exercises. East standardized eye training was performed once a week under qualified supervisiont completed as part of a course unit. In addition, the exercises should independently four to six days a week for 10 to 15 minutes maximum be carried out at home.

In it Analysis of pre and post resultst inside the CVS-Questionnaire could on the IG significant improvement in the categories “Itchy eyes”, “Foreign body sensation”, “Tears”, “Eyes redness”, “Eye pain”, “Dry eyes”, “Blurred vision”, “Difficulty focusing near”, “Increased sensitivity to light”, “Feeling that vision worsens” and “headache”.

No positive effects were found in the CG.

The results of Neck Disability Index the busy IG significant improvement in mean scores by 70 percent of the categories from the pre-test to the post-test. The largest effects were seen for ‘reading’, ‘headache’, ‘concentration’, ‘work’, ‘driving’, ‘sleeping’ and ‘leisure activities’.

Here too no positive changes could be detected in the control group.

Based on the results presented, it can be assumed that a 10-week eye training resulted in significant improvement in headaches, neck discomfort, and CVS Guides.

It cannot yet be answered conclusively whether eye training also leads to improvements in people whose symptoms are not caused by CVS but, for example, by orthopedic causes.

To ensure that the potential causes of head, neck, and eye disorders are fully addressed, Combination of strength, endurance and flexibility training with complementary neurotraining contentsuch as the eye training examined in this thesis.

spend in the meantime many people the Most of your working time in front of the computer screencausing these individuals frequent problems with headaches, neck and eye disorders have.

In addition to forms of training that have already been shown to be effective, such as strength, endurance, and mobility training, neurotraining, particularly in the form of eye training, is an effective measure to alleviate the impairments associated with CVS.

In sports, fitness and health facilities, neurotraining is a useful addition to existing training offerings.to help affected people as effectively and comprehensively as possible.

Also, apply providersthat they have such wide range of solution strategies for people’s health complaints in visual display workplaces dispose, with your personal, material and spatial requirements as Ideal cooperation partners for all companieswho want to contribute effectively to maintaining the health of their employees.