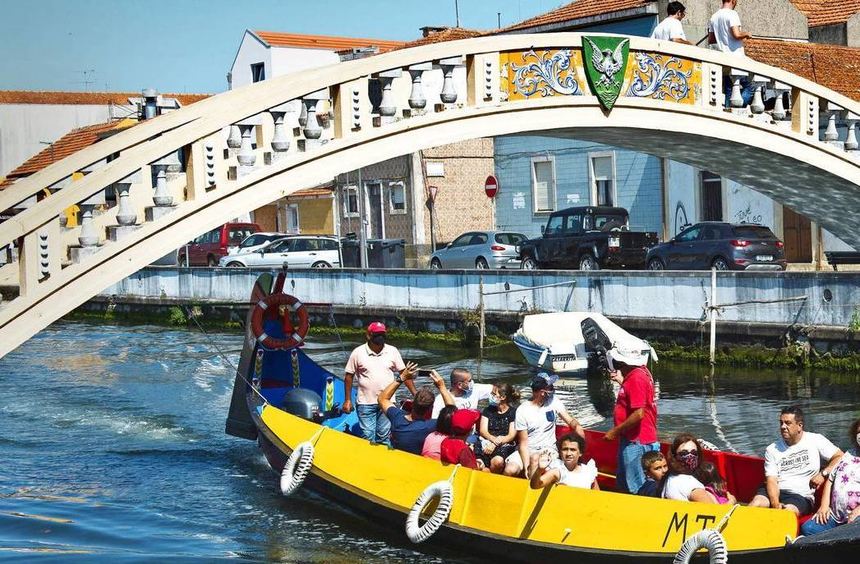 Salt on your lips, wind on your neck, sun on your face: with billowing sails and foam on the prow, a wooden boat takes you across the Aveiro lagoon. Moliceiros are the names of the historical sailors with whom seaweed was collected here in the past, which the farmers used as natural fertilizer in their fields. But that is history: of more than 1000, only ten of the colorful traditional boats of the municipality of Murtosa remain. One of these is owned by Verónica Fonseca, who organizes trips for visitors.

Once on board, you will never want to leave. Flocks of flamingos search for food in the Aveiro lagoon. With the naked eye, you can see the animals wading through the shallows, their eyes just above the surface. Like baleen whales, they filter food from the water with their bent coke beaks, but bird food is much smaller. The characteristic pink plumage develops because flamingos store pigments found in algae, bacteria, and crabs in their feathers.

Eat and drink Delicious fish at Bela Ria in Ilhavo, www.fb.com/RestauranteBelaRia, at Canastra do Fidalgo in Costa Nova, www.canastradofidalgo.pt and at Marina by Luis Lavrador in Gafanha de Nazare, www.marinabyluislavrador.eatbu.com

Now, at low tide, other two-legged creatures are also in the lagoon. The sandbanks are the destination of innumerable small boats. The fishermen collect mussels and sea snails, which they sell in the area’s markets, specialties fresher than anywhere else, and the eels from their traps end up in cans, as do the sardines, mackerel and squid from the Atlantic. The Comur factory, founded in 1942, now has its own museum and sells canned fish not only in its showrooms, but also online all over the world. Little Portugal is a seafaring nation: many hundreds of years ago, merchant ships headed to Africa, Southeast Asia, and South America, returning laden with exotic goods. South of Porto, in the Aveiro Lagoon, is the main port of central Portugal. In Ilhavo, men once set sail to fish for cod in the distant North Sea. “Salted and dried, cod has a long shelf life, which makes it the perfect food for long trips,” says José Alberto Pequeno. “Without fish, we Portuguese would never have been able to discover the world.” The 66-year-old himself spent decades on the water to get the sea nation’s favorite dish. Kilograms of bacalhau, as the fish is called in the country, continue to be consumed, even though Norwegian fishermen in Lofoten are now providing supplies. Nobody wants to do without bacalhau, says José Alberto Pequeno: “It is said that in Portugal there are 365 ways to prepare cod, one for each day of the year.” The “king of fish” has many admirers: there is even a brotherhood bacalhau The Ilhavo Maritime Museum also pays homage to the cod.

Aveiro is just around the corner. There are no gondolas in the city, nor the Rialto Bridge, nor masses of tourists. The place, crossed by many canals, still looks like a little Venice. This is the city tour on the water. The prow of the motorboat is not adorned with a mermaid, but it is painted quite revealingly – there is a rather crude sense of humor here. But Aveiro’s architecture is also worth a look: because Bacalhau’s merchants did good business, they were able to afford magnificent Art Nouveau buildings. The salt to preserve the fish also came around the corner. In the marshes of Aveiro not only the classic sea salt is found, but also the noble salt flowers: both cooks and pastry chefs trust the flavor of Flor de Sal. But, who serves the best bacalhau in the lagoon? That’s where the spirits split. The truth is that it takes time to prepare: the cod has to be soaked in water for at least twelve hours before it can be boiled. In one out of every two pubs there are Bolinhos de Bacalhau, fried cod croquettes, as a snack. Jorge Pinhao of the Bela Ria restaurant has many defenders: he cooks the specialty in tomato and pepper sauce. In other places there is cod with chickpeas or in cabbage leaves. In the fishing village of Costa Nova, Leandro Mota and Joana Martins of the Canastra do Fidalgo restaurant bring specialties like swim bladders and tongues to the table. Bacalhau’s experts don’t let anything come to the steak, but they whisper to you to try the cheeks as an appetizer: crispy fries are a delight. Time for the digestive walk! Just around the corner are the prettiest wooden houses on the coast, painted as bright white as bath towels. From here, a wooden plank path leads over the dunes to the seemingly endless beach.