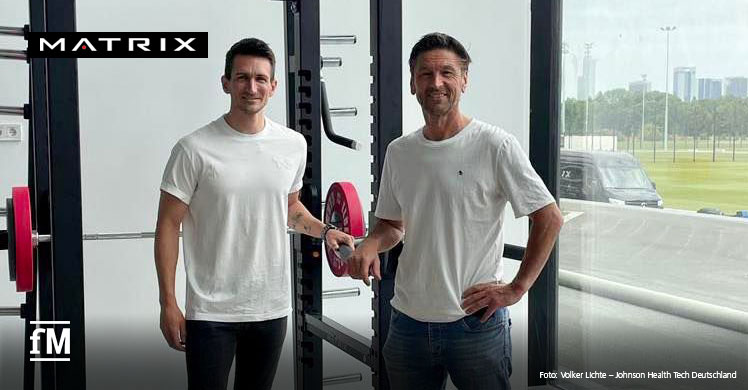 For elite sport and grassroots level: the German Football Association. V. inaugurated his new address in Frankfurt with a grand opening. On the DFB campus, sport and administration must grow together and develop talents. The company Johnson Health Tech has been equipping the DFB selection teams with training equipment from its Matrix brand for many years and has also been awarded the contract to equip the new training rooms on the DFB campus.

After ceremonial opening the German Football Federation (DFB) has at its new address on July 1, 2022 DFB campus the “full operation” began.

In the video: Official opening of the DFB campus

At Kennedyallee 274, on the site of the former racecourse in Frankfurt-Niederrad Football and administration grow together and the best conditions for the base are created Developed success and talent for the top Will.

For him Furnishing of training rooms. is he long-time supplier of the DFB Responsible: Matrix. We spoke to Matrix Key Account Manager Performance and Sport Volker Lichte at the opening ceremony. (Now keep reading: ‘New Project’)

fM: Mr. Lichte, you have been equipping the DFB selection teams with training equipment for the Matrix for several years. How important is the role of equipping the training rooms on the new DFB campus for Johnson Health Tech and the connection with the DFB?

Volker Licht: A very high priority. If you consider the dimensions of the external impact, not only in Germany but also internationally, that this DFB academy or the DFB campus has, then I can only say that it is of great importance for Matrix as a company.

I am very proud that we have been awarded the contract and, ultimately, what we have already implemented in recent years on the courses and in the European and World Championships, that is, equipping national players with fitness equipment that is now we can do here at the base. in Frankfurt

The difference is that not only the senior team, the U-21 and the women’s team train there, but all the youth teams. Due to the possibility of living here, the players will find excellent training opportunities on campus and can already train in a standardized way with our team before making the next jump to the U21 or even the senior team.

What does this day mean to you personally?

The opening day of the DFB campus is a very special day for me. On the one hand, because the inauguration is attended by numerous guests from sports, politics and associations from all over the world. It is an exceptional experience to be able to represent The Matrix here.

On the other hand, because my daily job is to organize events and tournaments and exchange ideas about what we can do and e.g. B. also give interviews. But a day when it comes to saying, now you’re being rewarded for what you’ve done in support of the national team over the last few years, it’s a special day.

At this point, one thing is very important to me: For our team, the Matrix team, whether it’s logistics or processing, this is also a reward and I’m there on their behalf. And yes, I am very happy about that.

What were the biggest challenges for Matrix and for you as managers in the months of completing the DFB campus?

Because it was a large construction site, we had to go through different scenarios: how can we place our devices, how can we optimally use player processes and paths, what devices do we use the lower and upper areas of the facility with, how we placed the devices Place them in the areas and join and complete them in an optimal way: these were big challenges.

In addition, there were the classic to-dos, the creation of the design, the standardized look, how the devices fit together – these are all things that played a special role here at the DFB.

What’s next for Matrix on the DFB campus? To what extent will you continue to be involved in the processes there in the coming months?

Anyone who knows me or my interpretation of the association knows that everything does not end with delivery. On the other hand! It restarts at another level because a partnership is a continuous process of improvement and responsiveness.

We are optimizing and we can also put new Matrix devices and innovations there. It is not only about sports training, but also about the regenerative area. Our massage chairs are already set up there, which are very, very popular, by the way, with the men’s and women’s national teams.

More about the subject: ‘Matrix becomes the exclusive provider of fitness equipment for the DFB campus’