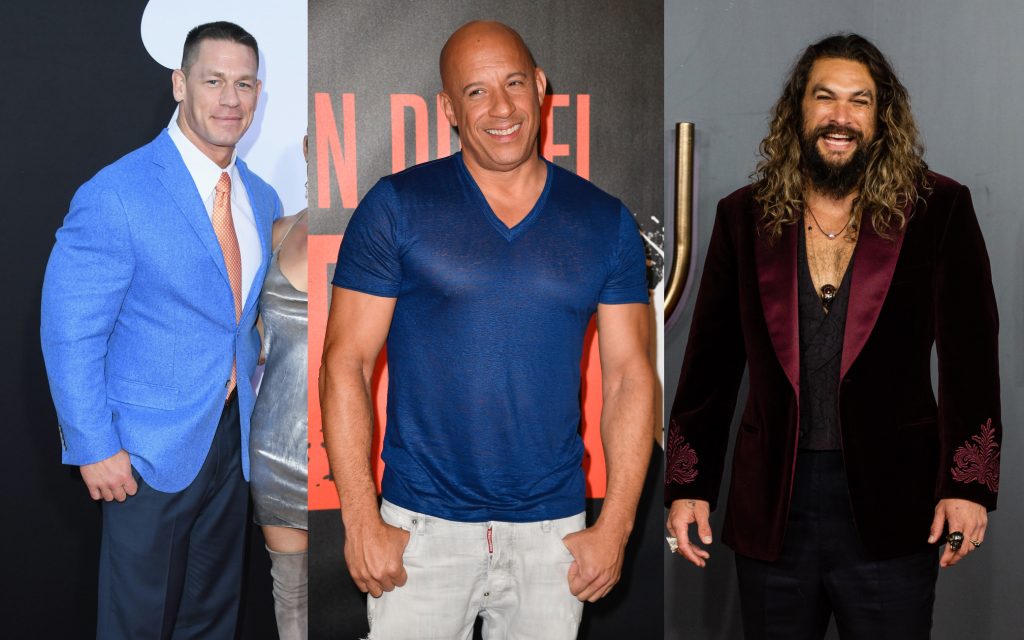 “Fast and Furious” is now an action movie classic. For over 20 years, blockbusters have focused on fast cars, wild chases, criminal activity and, of course, strong guys. The tenth part will be released in theaters in May 2023. We have observed muscular athletes and compared their fitness strategies.

The hit series “Fast and Furious” is certainly not for everyone. Every year, upgraded sleds, muscular bodies, and an action-packed, testosterone-fueled plot meet here. But millions of fans make “Fast and Furious” a money machine, because the ninth part alone earned more than 700 million US dollars in 2021. So it’s no wonder that “Fast and Furious 10” opens in the cinemas in 2023. Again and again you are amazed not only by the tuned cars and wild chases, but also by the main actors with their mega muscles. We look at and compare the training and nutrition methods of Vin Diesel, Jason Momoa, Vin Diesel and John Cena.

Vin Diesel, aka Dominic Toretto, has been with us since the first part of “Fast and Furios” (2001) and impressed even then with his big muscles. Meanwhile, the lead actor is also acting as a producer for the hit series of action movies. Furthermore, one is amazed that after more than 20 years he has hardly lost any of his physical stature. And so, 102 kilograms of body weight are distributed over a height of just over 1.80 meters.

Vin Diesel is a prime example of how extreme actors can go for a movie role. But also because of how they can let themselves off the screen. Paparazzi photos showed him in 2021 on a yacht in Italy with a decent plauze. Even the pecs sank limply. The brawny man was barely recognizable. But that also shows how hard it is for some stars to maintain the top form they’re known for.

But Vin Diesel is back in shape just in time for the film shoot. As the fitness platform jackedgorilla.com reveals, he then trains five times a week and takes a break on the weekends. When he works out, he follows strict split training.

It is based on superset training. This means that after each set of one exercise, another set of a second exercise immediately follows to stress the muscles to the maximum. Basically, always train four sets of eight reps each.

Eat a good amount of calories at meals and reduce your carbohydrate intake towards the end of the day. Breakfast is still relatively sweet and rich in carbohydrates, at lunchtime there are mainly sources of protein such as fish and chicken with rice or sweet potatoes, and at night there are more proteins, vegetables and a touch of carbohydrates .

Conclusion: the main thing is the dough! A robust appearance seems to be more important to Vin Diesel than a perfectly defined body.

Unlike Vin Diesel, Jason Momoa is new and ready to play one of the villains in Fast and Furious 10. At least physically he has a lot to oppose Vin Diesel. At 97 kilograms, the 1.93-meter behemoth looks fitter than the “Fast and Furious” veteran. Not surprisingly, Momoa is around 13 years younger than Vin Diesel. He also keeps himself physically fit in a completely different way. Not least to be able to convince as Aquaman. When it comes to training, Momoa not only focuses on weightlifting, but also climbing. FITBOOK already informed about it. That also explains why he is, despite the size of him. “only“ weighs 97 kilograms. After all, when you climb, you have to be able to lift your own weight.

And Momoa also likes to exercise with his body weight and outdoors, as revealed by his friend Kim Fardy to “Men’s Health”. So that she can train anytime and anywhere, even on the film set. Still, to build muscles like Momoa’s, you have to lift weights. Since she already puts a lot of pressure on her back, biceps, and arms when climbing, strength training primarily trains her legs, shoulders, and chest.

According to GQ magazine, Jason Momoa eats fresh fruit and quinoa especially before training. They provide quick energy and are easy to digest. As a natural energy drink, trust coffee. When it comes to protein sources, he prefers fish and meat and when it comes to fat, he prefers avocado and olive oil. That sounds healthy.

Conclusion: the main thing is to have fun! For Jason Momoa, enjoying exercise is more important than long gym sessions.

John Cena aka Jakob Toretto was already in the last part of the action hit. He plays the little brother of Dominic Toretto (Vin Diesel) and is also his adversary. And John Cena is also in “Fast and Furious 10”.

Physically, he’s kind of a cross between Vin Diesel and Jason Momoa. At 250 pounds, he weighs even more than Diesel and with his six pack he even outclasses Momoa when it comes to muscle definition. Obviously, Cena works harder on his body. Because he is not only an actor, but also a fighter. He won the World Wrestling Entertainment (WWE) heavyweight title an incredible sixteen times. He was previously active in sports as a bodybuilder and soccer player.

According to the men’s portal manofmany.com, Cena, like Vin Diesel, trains according to the party rhythm from Monday to Friday. Each day a different part of the body is treated. However, Cena makes it even more consistent and really only trains one area a day.

And the training is really hard: on average, there are five exercises per body part. The one that least trains the calves with only two exercises, but in total in 14 series. He hits his back harder with eight exercises and a total of 35 sets.

Nor does it do things by halves when it comes to nutrition. Instead of just eating three big meals a day like Vin Diesel, Dinner Eat Seven! Every meal is packed with protein. Whether it’s cheese, eggs, fish, meat, protein bars, or protein powder, every meal is made up primarily of protein and, to a lesser extent, fat and carbohydrates. But vegetables also play an important role. Hard training and a high-protein diet create an impressive muscle build that fans will be able to admire again in Fast and Furious 10.

Conclusion: The machine! John Cena trains and fuels his body for peak performance without compromise.