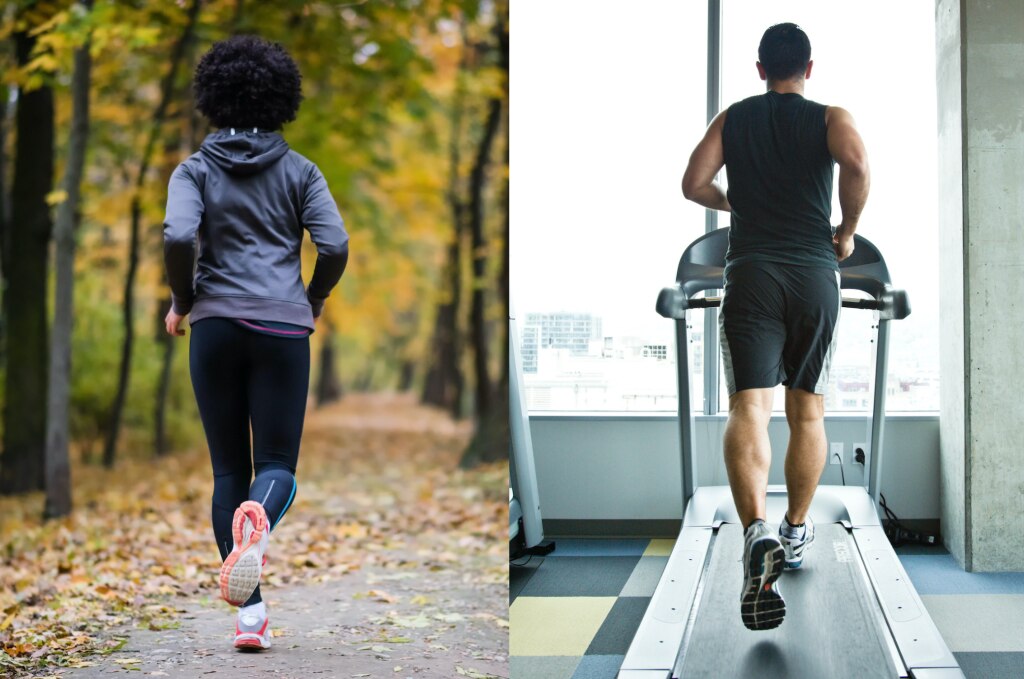 Some love to run in nature, others use the treadmill for their training. But do these different preferences also have different effects, for example, on performance, calorie consumption, or susceptibility to injury? FITBOOK provides an overview of the advantages and disadvantages of both types of running training.

An advantage of running outdoors compared to the treadmill is obvious: it saves money. If you run outdoors, you only need your sportswear and you can start right away. Unlike the treadmill. You have to buy it yourself or use it at the gym, where a membership fee must be paid. But leaving aside the obvious, where else are the differences? We take a look at what studies have found about it.

Many people who focus on endurance sports, especially running, for their training have the goal of losing weight. So the legitimate question is, does going for a run or getting on the treadmill make a difference in calorie burn? Based on a US study with young subjects, energy expenditure at a self-selected moderate speed was shown to be similar for both training preferences.1 However, what the study did not examine is the extent to which factors such as ground conditions, slopes or obstacles affect calorie consumption during an outdoor workout.

However, if you prefer to work up a sweat in the gym, you should use the high-calorie treadmill. In this sense, it is more effective than training equipment such as rowing machines, bicycles or step machines.two

Running outdoors or on the treadmill: which is easier on the joints?

Some runners prefer the treadmill because it’s said to be easier on your joints and less likely to hurt you. Is that correct?

Basically, running puts stress on your joints, but can a treadmill really cushion and reduce stress? Here, too, the aforementioned study published in Medicine and Science in Sports and Exercise found an answer. Surprisingly, the treadmill doesn’t seem to have a noticeable advantage over running outdoors here. The study concluded that muscle activity and pressure on the joints are comparable.

Also interesting: trail running: If you run off-road, you benefit in many ways.

In terms of safety and reduced risk of injury, treadmill training may have an advantage. At least one meta-analysis from the “Journal of Sports Health”, in which ten studies were considered, provides corresponding indications in this regard.3 Training on the treadmill ensures that you jog with smaller steps than when training outdoors. The aforementioned research concluded that shorter stride length reduces the risk of injury while running.

An advantage of treadmills, but one that doesn’t automatically make exercise machines safe. The US Consumer Product Safety Commission announced on Twitter in March 2021: “In 2019, US emergency services treated approximately 22,500 treadmill-related accidents. All age groups were affected (about 2,000 cases involved children under the age of eight).”

Treadmills can not only lead to accidents and injuries due to falls or unsupervised use by children, but also outdoor running should be given priority in other areas, especially when it comes to the positive effect on the psyche . It may not be surprising, but it is scientifically proven: exercise, and therefore running, in nature is a real boost for mental health.

This is what British researchers found in a meta-analysis of studies comparing physical activity in natural versus indoor settings.4 The finding: Those who do their workout outdoors feel more revitalized, invigorated, and energetic, while also being less tense, confused, angry, or depressed. Outdoor athletes also stated that they wanted to repeat their sports unit soon and stay on the ball. The analysis could not explain exactly why this happens, but it is assumed that the environment is stimulating, while training in closed rooms is quite monotonous, despite entertainment offers such as television or music.

Also interesting: How do you get faster while running?

What trains the muscles better?

If you specifically want to build muscle, the ideal is to combine endurance sports with strength training. But running strengthens the muscles and above all defines those of our legs. And for this goal, according to a study this year, after lacing up your shoes, it’s better to run out of the door than on the training machine. A six-week study of a group of recreational men found that leg skeletal muscle mass was more positively affected by outdoor running than treadmill training. Physical fitness also benefited more from exercising in a natural outdoor setting. At the same time, the study concluded that regular running with the trainer at home also makes you fitter and reduces body fat.5

In general, running outdoors has the advantage, not only but also because it is more varied and demanding. In addition to physical fitness, it also promotes mental health. But the treadmill can also score points compared to other training equipment. Ultimately, exercising regularly is key. Before you let the weather or other environmental conditions stop you from exercising altogether, you need to move indoors.

Do you have a question about fitness or nutrition? Feel free to email them to [email protected] We select the most interesting questions and answer them with the support of our team of experts and the current situation of the study. We are excited!