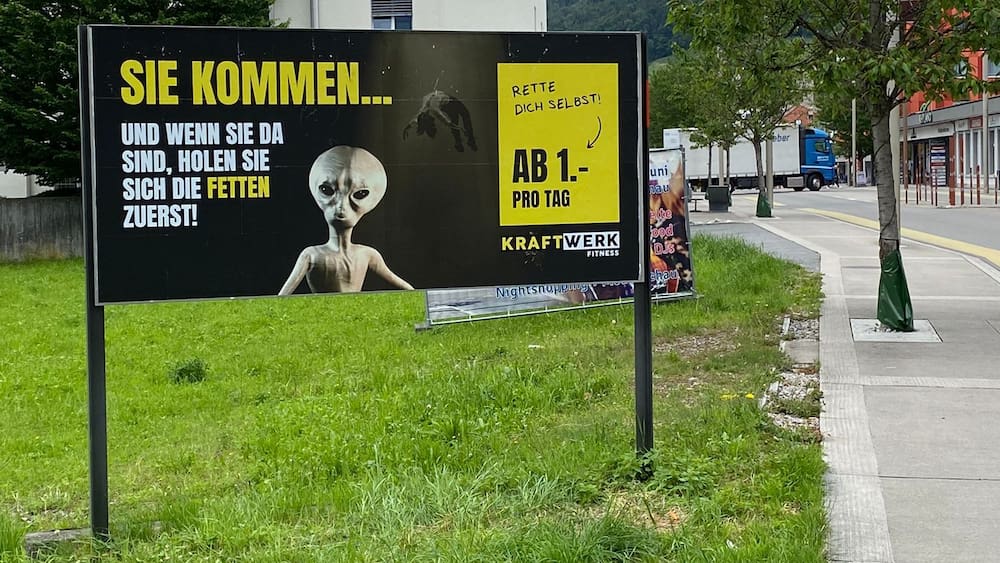 Kraftwerk Fitness in Heerbrugg SG is making a big splash with its current poster campaign. An alien is depicted on the poster. However, Blick readers are outraged by the large print: “They’re coming… and when they’re there, catch the fat guys first! Save yourself!” With this provocative advertising, the studio wants to attract new members. But that backfires. For many people, the advertising goes too far.

The consternation is great. “Isn’t anyone allowed to be fat today?” or “Are fat people excluded and humiliated here?”, two of the numerous reactions. There is talk of body shaming, that is, derogatory statements about the appearance of others.

It’s not the first ad with body shaming

Blick confronts the head of the studio, who is responsible for billboard advertising. “In no way is it nor was it my intention to discriminate against or devalue overweight people,” Ali Hasani defends himself from the accusations. He himself was overweight for a long time.

“That’s why I can very well put myself in the position of other overweight people.” She changed her lifestyle with hard training and a healthy diet. Being overweight is “in most cases a decision and not something given by God,” she says.

“Body shaming is a buzzword”

Nor does he accept the accusation of body shaming: it is a “fashionable term”. “In my opinion, body shaming exists in people who suffer from illness or have a physical disability as a result of an accident.” Hasani emphasizes that such people would never be allowed to judge. However, he is still guilty of how he wants to prevent those affected from feeling approached with his advertising.

Instead, Hasani emphasizes the health aspect: “Cardiovascular diseases make up a large proportion of premature deaths these days, so I see it as a duty to do my part to motivate people to exercise. I am happy to accept this criticism.”

This is not the first time that Kraftwerk Fitness has advertised at the expense of overweight people. An older advertising sign reads in all caps “It is sufficient if this font is bold.”

Studio operator invites you to speak

The topic body shaming has come into increasing focus since the rise of social media. Heavily edited and filtered photos abound, promoting ideals of impeccable beauty far removed from reality. Experts agree that such role models can have fatal consequences, especially for young people. A counter movement has emerged with body positivity, which aims to convince people that they are satisfied with their body, even if it deviates from common ideals of beauty.

Gyms have had a very difficult two and a half years. They had to close their doors several times due to the corona pandemic. Numerous clients were lost in the process and must now be recovered. Whether advertising on the backs of obese people is useful here seems more than doubtful. The reactions of the readers speak a clear language: That is not possible! “I cordially invite people who feel attacked to my gym to get an idea of ​​me as a person,” says Hasani. He is open to conversations.