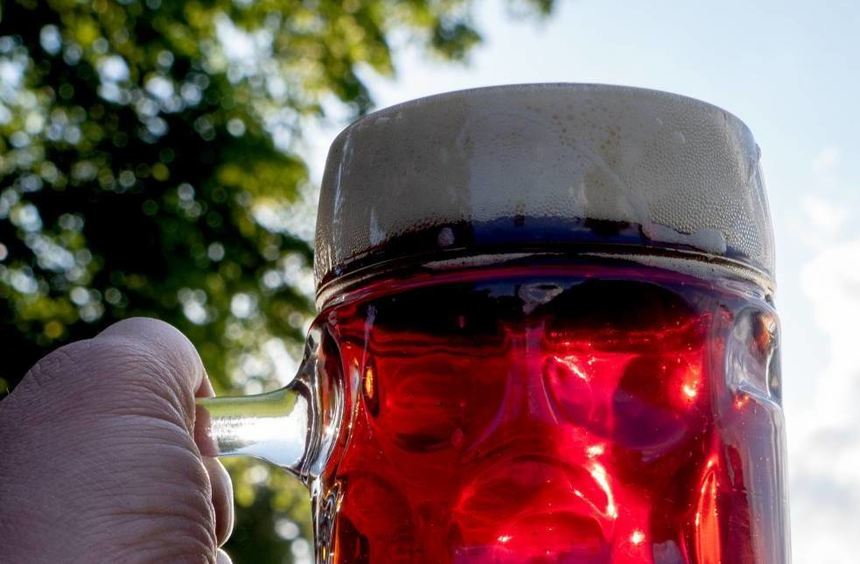 Away from towns and roads, the path climbs over roots and mossy stones. The canopy seven points of light from the sun’s rays. The grass brushes the legs, the butterflies dance. A tree is covered in ash fungus, a type of fungus once used as heating fuel.

The ascent of the Kronberg in the Bavarian Forest drenches your shirt and forehead with sweat, but it’s not an alpine summit storm. The top touches the thousand meter mark, surrounded by dense forest. Above, a wooden cross emerges from the green. The reward for the ascent is silence, and no noisy inns.

On the contrary: far and wide there is no beer in sight here and now on the beer long distance hiking trail. Unless you’ve packed one in your backpack as supplies. Only on the descent does the drought on the Gutsalm Harlachberg end.

That brings the day in the Tour de France.

That brings the day in the Tour de France.

But don’t worry about fraudulent labels. Of course, there’s plenty of beer flowing on “Germany’s first long-distance beer hiking trail,” as the Arberland tourist office advertises. Just not everywhere. Eight breweries along with beer gardens and other pubs are part of the main trail, which leads through the Bavarian Forest over a distance of 109 kilometers and 2,836 meters in altitude.

The circular route from Viechtach is divided into six stages, so you can easily start in Zwiesel or Regen. There are also two additional routes from Zwiesel, which can be reached by train.

The Beer Long Distance Hiking Trail, which combines existing hiking trails, is new in this form. However, due to the pandemic, it never officially opened on site, only digitally. Until now you can feel like a pioneer on the way, which, however, is also associated with planning initial problems.

Be sure to start by downloading the map and directions to your smartphone. Relying solely on jump symbols stuck along the path doesn’t work (yet). Signage along the way is sometimes poor.

And where is the beer that the road promises with its name? In the stage town of Zwiesel, for example, where the steam beer brewery has a long tradition. In the 19th century there were more than a dozen breweries in the small town in Lower Bavaria. Today is the last one in the city.

With a bit of pathos one could say: The beer long-distance hiking trail is also a trail that wants to counteract the death of the brewery.

Dieter Pfeffer is the head of the family steam brewery and confidently represents his product. “We want to be a contrast to the big players in the market,” he says. Pfeffer sees the pleasure of drinking as a personal experience with history: “I can feel the region here.”

The brewery’s head boss says it “sucks” that the press has gotten enough hype about America’s craft beers that the hype boils over, when they and others do something similar without long delivery routes.

Frank Reuter takes the same line. He is Adam Bräu’s brewmaster in Bodenmais, where he begins a demanding section of the long-distance hiking trail up the Hennenkobel mountain. “Craft beers have always been brewed in small Bavarian breweries,” says Reuter. What appeals to him is “re-updating old recipes”.

It is a matter of honor that the 54-year-old drinks beer every day. “Preferably a light one and always yours. I’m allergic to foreign beers,” says Reuter and laughs. Wine for a change is not taboo for the brewmaster. As long as it’s a “good French red wine”.

In many places, the long-distance beer hiking trail goes off the beaten path. Fresh air is well-being for the soul and the lungs. At the same time, the eyes for the miniatures of nature sharpen step by step. The smallest grows in size.

In the midst of media sensory overload, when was the last time you noticed the grain of tree bark, the symmetry of nettle leaves, the bright green of ferns against the light? Or thimbles, buttercups, clovers, glistening resin on trunks? It doesn’t always have to be spectacular.

The route is enriched by the valley of the Schwarzer Regen river, the idyllic Schwellweiher pond, a detour to the glass factory in Zwiesel or the completely painted church in Ludwigsthal.

A guided tour of Regen’s historic ice and beer cellars is quite an experience. They were buried and forgotten for a long time. The Postkellerfreunde have revived them. Sigrid Schiller-Bauer is one of them. The 51-year-old volunteer helps preserve cultural property on her own doorstep.

“In addition to beer, produce like meat, sausage, leeks and carrots used to be stored at the ideal refrigerator temperature,” he says. At eight degrees Celsius, the icy breath is in front of her mouth. Light effects and information boards deepen the underground experience.

The finishing touch is a beer tasting, outdoors in the Postkellerfreunde cabin. Slogan boards adorn the wooden walls. One says, “There is no beer in heaven, so here we drink it.” dop

For him get there by train is suitable Zwiesel What entry point preferably. is by regional train of platonize from wherever ICE long press to get directly. A viechtach one must of platonize coming back in Gotteszell change lanes.

the round core It takes more than 109 kilometers and six stages. Since the signage is not always good, it is advisable to load the map on your smartphone beforehand. Information and download at: https://wandern.arberland- bayerischer-wald.de

Surprise effect in the additional stage through the national park bavarian forest it is the so-called “stone beer” in the Klause Schwellhäusl: extracted from a pipe that goes through the rock. (www.schwellhaeusl.de)