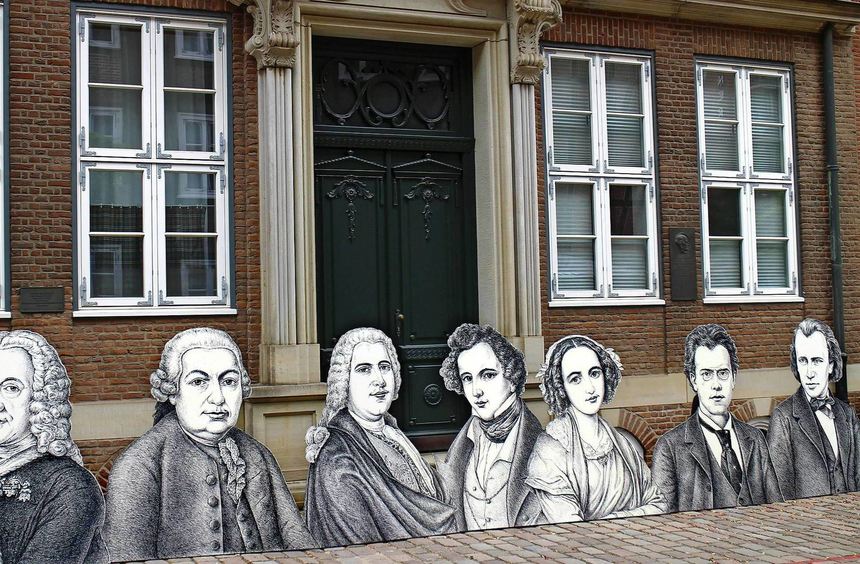 Of course, Johannes Brahms could not miss the opening concert of the Elbphilharmonie in January 2017: he composed the “Symphony No. 2 in D major, Op. 73” in 1877 during his stays in Carinthia and Baden-Baden. Brahms is the great composer born in Hamburg, although his talent was initially misjudged in the Hanseatic city. That is why he went to Vienna at the age of almost 30, made a career there and is buried in a grave of honor in the Vienna Central Cemetery.

In foot width this is near the songwriters rooms Lindner Hotel I’m Michel, double room from 202 euros, www.lindner.de/

Elegant design hotel near the Laeiszhalle: side hamburgdouble room from 230 euros, www.side-hamburg.de.

The composer’s rooms are from Tuesday to Friday. Open from 10 a.m. to 5 p.m., entry 9 euros, children under 10 free. You can book group tours on different composers and themes, www.komponistenquartier.de.

The Brahms Museum is also open on Saturdays and Sundays from 1:00 p.m. to 5:00 p.m. Entry these days on a donation basis, www.brahms-hamburg.de.

Church San Miguel (“Michel”) is usually open every day. The visit to the church room is free. Access to the tower (stairs of 452 steps or elevator from the first floor) with a view of the Hanseatic city costs 6 euros, children (6-15 years) 4 euros.

The crypt with the tomb of carl philipp emmanuel bach and other personalities from Hamburg can be visited for 5 euros, children pay 3 euros. There are combined tickets for the tower and the crypt, www.st-michaelis.de.

However, Brahms remained faithful to his hometown, visiting it from time to time “to walk the well-known walls and streets”. As early as 1971, the Brahms Museum was opened in the former Beyling monastery on Peterstrasse. Six museums are now united under the name Composers Quarter. They are dedicated to seven artists who were born in Hamburg or who worked there for a long time.

Questions like: Who were the musicians? How did they live? In what conditions did they work? How does your music sound? Visitors will find the answers on bulletin boards, touch screens, listening stations and movies. Also on display is a scale model of a Baroque opera stage with sliding bottoms and cable traction system, as well as original or replica instruments.

Peterstrasse is a good half hour’s walk from the new temple of music on the Elbe, and a short walk from the neo-baroque Laeiszhalle concert hall on Johannes-Brahms-Platz. Behind sober, modern buildings, you wander through an alley that has been restored since the late 1960s and brings old Hamburg to life. Thanks to the Carl Toepfer Foundation, simple houses and richly decorated merchant houses from the 17th and 18th centuries could be reconstructed. Each house is dedicated to a Hamburg personality. Johannes Brahms was born in 1833 very close to Specksgang in the Gängeviertel. Only a stele remembers the house where he was born. It burned down during World War II. The parish priest of the nearby main church of St. Michaelis, Hamburg’s iconic “Michel”, baptized and confirmed young Johannes. At the time, the almost identical-looking predecessor was still standing. The church caught fire in 1906 during welding work and burned down. In six years it was rebuilt in the old style but more fire resistant. It was not until four decades after Johannes Brahms that another superstar took up residence on Peterstraße: the Telemann Museum opened its doors. In 1721 the Magdeburger arrived in Hamburg. As a salaried “Director Musices” (music director), he was responsible for the music in the five main churches and also cantor of the Gymnasium Johanneum. He was a workaholic and at the time better known throughout Europe than Johann Sebastian Bach. Not only were 1,500 cantatas born, but also an Evangelical Passion each year, 46 in number. In addition, Telemann organized operas, festive and funeral music. For 15 years he was also artistic director of the municipal opera at Gänsemarkt.

He was also successful as a businessman. He sold concert tickets and took out a music subscription with sheet music. To balance his work, Telemann tended a garden on the outskirts of the city and exchanged botanical experiences with his colleagues. George Frideric Handel even sent flower bulbs to him from London and, despite some 3,600 works left by the busy master, he fell into oblivion soon after his death. Musical tastes changed. Late Baroque was out. The classic announced itself. Carl Philipp Emanuel Bach succeeded his deceased godfather. He worked at the court of Frederick the Great as a chamber harpsichordist in Rheinsberg, Berlin and Potsdam and was selected from among four candidates. A plaque in front of the Hamburg City Hall commemorates Georg Philipp Telemann.

At that time, here was the cemetery of the monastery of St. John, where he was buried. His godson is buried in the “Michel” crypt, which was damaged in the 1906 fire but not destroyed.

Johann Adolf Hasse moved into the Museum Quarter at the same time as Carl Philipp Emanuel Bach. He was born in 1699 in Bergedorf, today a district of Hamburg, the son of a family of organists. After initial successes as a tenor at the Gänsemarkt Opera and in Braunschweig, he went to Italy. He later shaped the musical life of Dresden for 30 years as a composer and conductor. At the beginning of the 19th century, the birthplace of Felix Mendelssohn Bartholdy and his sister Fanny de el was in front of the church of St. Michaelis. The museum showcases the career and bond between the two gifted brothers who died young. The passionate cyclist Gustav Mahler was a restless and versatile composer and conductor. At the end of the 19th century he was the first director of the Stadttheater on Dammtorstraße for six years until he was appointed director of the Vienna Court Opera.

Johannes Brahms was made an honorary citizen of Hamburg in 1889. He thanked the mayor at the time with the words: “Just as the artist receives such a great mark of recognition, the people are happy with the wonderful feeling of knowing that they are so respected and loved ones in their hometown”. A doubly proud happiness when this hometown is our beautiful and venerable Hamburg.”