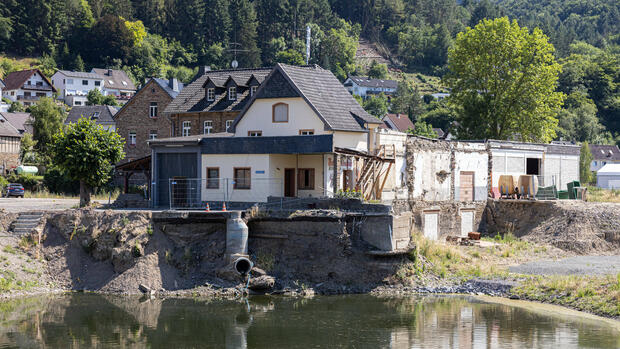 Ahr Valley, Erftstadt When storm “Bernd” caused devastating floods in the Ahr Valley, Erftstadt and other regions nearly a year ago, the Zurich insurance service center in Cologne was initially eerily quiet. “That was very unusual,” recalls Horst Nussbaumer, Head of Claims in Zurich Germany. “We saw the events on television, but hardly any clients contacted us.” Normally, after a big hailstorm, the phones don’t stop ringing.

But this time things were different. Customers first had to salvage their belongings, search for missing family members, and get to safety. Only then did the desperate calls come: “My house is gone, what should I do?” These were existential questions faced by Zurich employees. Many were overwhelmed, says Nussbaumer. Some even missed friends or relatives who lived in the flooded region.

Almost a year has passed since, on the night of July 14, immense rain floods made entire regions uninhabitable. According to preliminary estimates, the overall economic damage in Europe is between 40 and 50 billion euros. The GDV industry association estimates the insured damage caused by “Bernd” to household goods, commerce, industry and vehicles at around 8.2 billion euros. Never before have insurers in Germany had to pay more for damage caused by a natural catastrophe.

Insurers, scientists and consumer advocates are clear: such extreme storms will no longer be isolated cases. The damage could be even greater. “As a result of climate change, we will have to expect more and more extreme weather conditions and serious damage in the future,” warns GDV General Manager Jörg Asmussen.

Zurich board member Nussbaumer and his colleagues, who took a group of journalists to the Ahr Valley and Erftstadt a few days ago, want to raise public awareness. They want to show what went wrong in the past, how the recovery process can be improved, and how damage from future natural disasters can be minimized.

The situation on the ground remains dismal twelve months after the disaster. On the Telegrafenstraße in Bad Neuenahr, the waterline is still clearly visible in the houses several meters from the Ahr. Many buildings have been destroyed on the ground floor, the facades are broken, and the reconstruction is proceeding slowly.

About 20 percent of the damages reported to Zurich Insurance have yet to be resolved. There are not enough artisans and prices have increased enormously, explains Nussbaumer. The banners saying “We will keep going” and “Our city will be colorful again” show that people do not want to give up.

“Basically, I am very much in favor of rebuilding the Ahr Valley,” says Michael Szönyi, director of the flood resilience program at Zurich Insurance. But you have to build differently and plan differently than before. Prevention, insurance protection and binding political rules are important.

Viktor Rözer, a hydrologist at the London School of Economics, calls for preventive measures that have been discussed for decades to finally be implemented. Rözer contradicts the reading that last year’s flood was a singular and unpredictable event: “In 1804 and 1910 there were also heavy floods with similar discharge volumes.”

Extensive flood protection plans already existed in the 1920s. For example, they wanted to build retention basins in the upper Ahr valley. However, the plans were never implemented because there was no money.

Rözer recommends reviewing current flood models and taking into account events that happened long ago, as well as future effects of climate change. In addition, more rainfall and river level measurement stations should be installed.

Also, the traffic infrastructure was a problem in the Ahr valley last year. Many bridges had culverts that were too narrow. The camping vehicles were stuck in some passages until the masses of water tore the entire bridge and caused another tidal wave.

Many of the destroyed bridges have not yet been rebuilt. In Ahrweiler, the ruins of the old crossing stand next to the new makeshift bridge. For the reconstruction, Zurich manager Szonyi asks for a general concept, including, for example, bridges with larger passages. Nussbaumer stresses that there should no longer be any new construction of residential buildings in areas that are particularly at risk.

The insurance board member has also learned lessons from the flood disaster for his own work: crisis management must be improved, actionism helps no one. The first task should be to get an overview of the situation and then prioritize helping those affected.

There are also discussions about the proper insurance coverage. Not even half of the homeowners in the Ahr Valley had taken out natural hazard insurance. Unlike normal home construction insurance, this additional module also applies in the event of heavy rain, flooding and high water. For those affected, this meant that there can be no compensation for what is not insured.

Discussions between politicians and associations about a viable solution to insure against natural disasters are still going on. The federal states recently declared themselves in favor of compulsory insurance. The Advisory Council for Consumer Affairs advocated for mandatory basic natural hazard insurance as early as February. As it existed in Baden-Württemberg until 1994.

But insurers see problems. In the end, constitutional implementation will only be possible with significantly reduced insurance coverage, fears Jörg Asmussen, General Manager of the Association of the German Insurance Industry (GDV). Asmussen sees problems, for example, in high-risk buildings or in new buildings.

Instead, the GDV proposes the so-called opt-out model. Elemental protection would be automatically integrated into the residential building insurance, but could be deselected by the customer.

>> Read about it: In the aftermath of the most expensive catastrophe of all time: A new mandatory homeowners insurance is coming

Some insurers have already created facts. For example, since February, Allianz automatically offers its new customers integrated elementary insurance. However, the industry leader is also against compulsory insurance. “That would be fundamentally the wrong solution, because it would hide the individual risk of each individual customer and create no incentive for prevention,” says Frank Sommerfeld, head of property insurance at Allianz.

Opponents and advocates of mandatory insurance have at least one problem in common: Homeowners’ willingness to purchase additional insurance has decreased significantly since the flood and is about the same level as before the flood disaster.

The colored ribbons on the Mayschoß railings reminding us of last summer’s flooding don’t change that. The hydrologist Rözer demands that more memories of this type be left, that houses and trees be marked with water lines, for example, so that the disaster remains more present in the minds of the population.

3. Involve all homeowners through the pool solution

In Germany, few buildings are considered difficult or impossible to insure. The approximately 98,000 addresses that are at acute risk can be precisely defined. They belong to the highest hazard class four in the zoning system for floods, backwaters and heavy rain (ZÜRS) developed by the GDV. There is a risk of flooding here at least once every ten years.

On the other hand, 92.8 percent of real estate, and thus 20.4 million addresses, are not affected by flooding from larger bodies of water. They are in category one.

However, this classification also has its critics. Heavy rains do not know high-risk areas, but can affect almost all regions of Germany, emphasizes the Association of Insured Persons (BdV).

In Erft, for example, the situation was different from that in the Ahr valley. There was flooding over a wide area here, many transportation routes were flooded. Unforgettable are the images of the gravel quarry in Erftstadt-Blessem. A landslide created a large crater and washed away parts of the residential area.

In order to offer insurance protection to homeowners in high-risk areas, BdV consumer advocates have proposed a collective compulsory system to politicians. Consequently, the federal states must provide a group solution together with the insurers.

In the process, homeowners would be hit with higher property taxes, with the extra revenue going to fund a risk pool organized by states and operated by insurers. The plan establishes that all homeowners who take out elementary insurance will be exempt from the higher tax. Avoiding paying taxes would also be an incentive to take out insurance.

“Countries would have to clearly define what should be insured,” says BdV chief economist Constantin Papaspyratos. High deductibles and limitations on insured benefits could allow homes in high-risk areas to be insured.

However, there will still be major catastrophes in the future, the damage of which insurers cannot bear alone. According to BdV board member Stephen Rehmke, politicians should regulate the handling of so-called accumulation risks in a binding way and not, as has been the case so far, promise unstructured emergency aid after a disaster.

So far, it is unclear how the federal government itself envisages a compulsory insurance solution. The Federal Ministry of Justice intends to submit proposals by December.

Plus: Countries want mandatory insurance for elemental damage to buildings