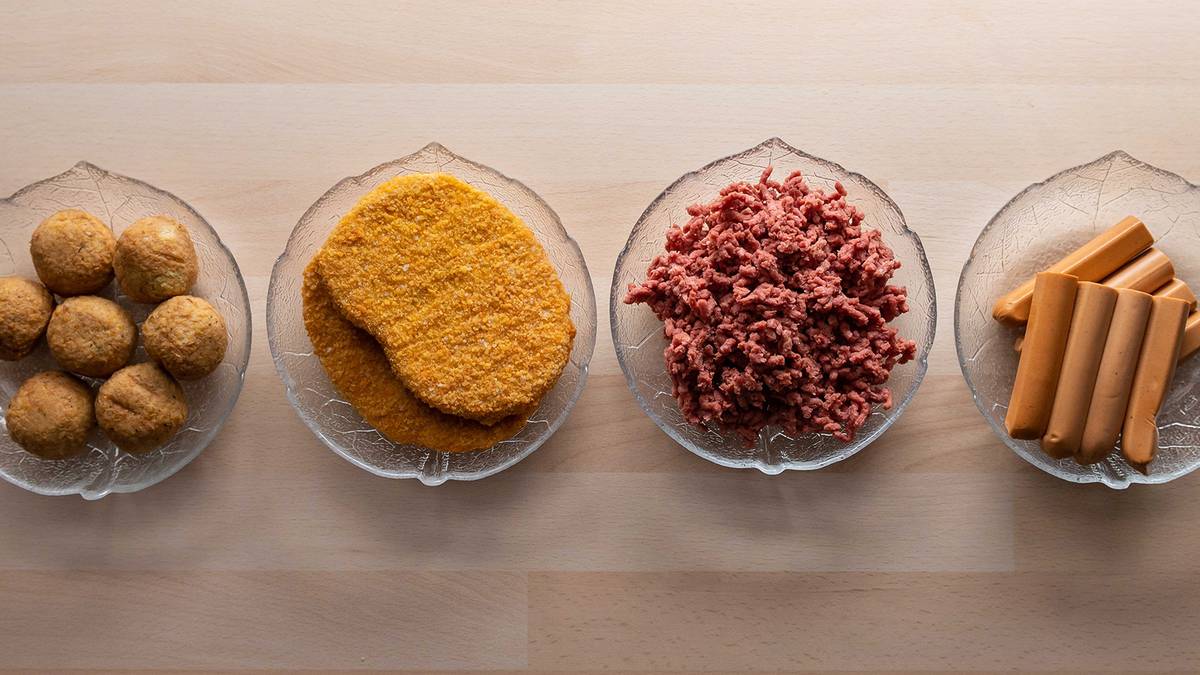 It wasn’t that long ago that you couldn’t find vegan or vegetarian alternatives to meat in supermarkets. Almost every grocery store around the corner now has its own refrigerated section for soya steaks, snap pea sausage, seitan salami, vegan meat salad, and much more that looks like meat but contains nothing. Because plant-based alternatives are popular.

According to the Federal Statistical Office, around 97,900 tonnes of meat substitute products were produced in Germany in 2021, i.e. 17% more than the previous year. This is “relatively low” compared to meat products, statisticians say, but at least the numbers, which have been rising for years, speak for themselves. After all, the Federal Agency for Food and Agriculture also recorded a record low with per capita consumption of 55 kilograms last year: since the calculation began in 1989, so little meat has never been eaten. Sausage producers are also reacting to this: At the Frankfurt meat industry trade fair IFFA in mid-May, the focus was increasingly on technologies and solutions for meat alternatives.

One thing is clear: plant-based alternatives cause less suffering to animals and generally have a significantly better environmental balance than meat products. But they are often expensive and highly processed. So are they a healthier alternative to sausages and the like? “Whether a steak made with soy or beef is healthier also depends on how many additives are added,” says Silke Restemeyer. “A natural beef steak usually has fewer additives than a soy steak.”

However, for the nutritionist of the German Nutrition Society, this is not an elimination criterion. “Compared to their animal counterparts, meat substitute products tend to have a more favorable composition in terms of total energy, fat and sugar content, saturated fatty acid content, and cholesterol,” emphasizes Restemeyer.

As a source of protein or for conversion

But why don’t vegetarians eat more vegetables instead of using meat substitutes? In addition to flavor, according to Restemeyer, many want to use it to meet the protein requirement that meat can no longer meet. “Meat substitute products are usually made from vegetable proteins such as soybeans or peas and, therefore, they are a high-quality protein source,” explains the ecotrophologist.

Meat substitutes are also often used during the transition phase to a vegetarian diet: “Then the family eats a meat dish and the vegetarian gets a soy schnitzel,” says Restemeyer, describing the situation at the dinner table. the kitchen at home. However, it is not absolutely necessary to cover protein requirements with meat alternatives in the case of a vegetarian or vegan diet. “You can also combine vegetable protein sources accordingly, for example with a stew of lentils and rye bread,” says the nutrition expert. “Both foods contain protein and the amino acids complement each other accordingly.” But if there were legumes, you could also cover your needs with them.

A look at the ingredients

Regarding the degree of processing, Restemeyer points out that a vegetarian meat salad, for example, cannot be declared less healthy than a vegan sausage. “Consumers have a bit to do with it and should look closely at the ingredient list and nutritional information,” she advises. “It’s good if the protein content is high and the energy, sugar, salt and fat content is low. You also want to make sure there are few flavor enhancers, preservatives and flavoring.”

The general rule of thumb is: the longer the ingredient list, the less favorably the product is rated. In principle, the nutritionist advises using as few processed foods as possible, even apart from meat substitutes, and preferring to choose the single product. “Anyone who buys frozen produce should therefore buy the peas on their own rather than those in a prepared sauce.”

It’s the crowd that counts

But why is meat substitute usually more expensive than meat? One explanation for this is that meat is already an established product on the market. According to industry experts, manufacturing companies could produce at a completely different level in this way and fall back on established structures, unlike the case with meat substitutes.

Meat is particularly cheap to buy at supermarkets and discount stores, especially during the spring and summer months of barbecue season. This is indicated by a WWF study from last year. Consequently, 85 percent of meat products were cheaper than plant-based sausages or burgers.

Meat, milk, organic: how do you eat climate-friendly?

When it comes to how sustainably we treat our planet, there is no escaping the topic of nutrition.

However, this is at the expense of the environment and animal welfare: “For meat to be available at bargain prices, large numbers of livestock must be kept and food, especially soybeans, must be imported on a large scale”, criticizes Tanja. Dräger de Teran, head of nutrition at WWF Germany. “This warms the climate and leads to the destruction of valuable habitats like rainforests and savannahs in Latin America.” cheap pork neck steak, instead of the higher priced tofu sausage.”

However, more and more people are turning to meat alternatives. “The range has grown significantly in recent years and has become more attractive. Many people are more open and simply try the products, even if they eat meat”, a development that the nutritionist believes is positive: “Those who eat a lot of red meat have a higher risk of colon cancer, for example. Therefore, consuming less animal-based foods may have a fundamentally positive effect on health, even if meat substitutes are consumed to a moderate extent.”