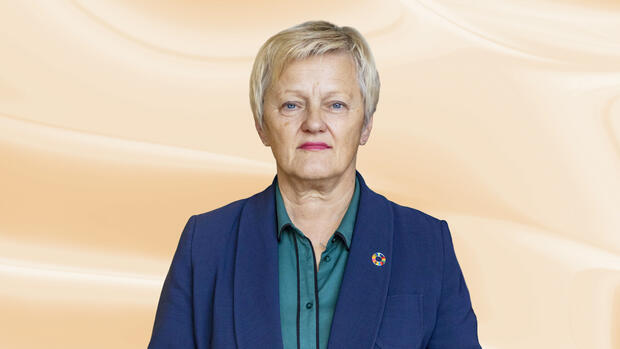 “The world is on fire”: With Corona, the attack on Ukraine, the climate crisis, the massive loss of biodiversity and rapidly rising costs in the supply chain, various crises have menacingly overlapped.

The so-called “perfect storm” is brewing. The food supply of millions of people is increasingly at risk. The Russian war of aggression is currently causing price increases, mainly at the expense of the poorest, as they spend most of their budget on food.

This applies to Germany and especially to the poorest of the poor in Africa, the Middle East and Southeast Asia. In these countries, families already spend about 70 percent of their income on food. Even the World Food Program is under financial pressure.

I think Putin is well aware of these facts. He uses hunger as a weapon to destabilize societies and as moral pressure. Against countries whose existence depends on imports, but also against the EU.

Some are now calling for an answer to this by rolling back the greening of agriculture. But that would mean turning a blind eye to the massive medium-term effects of crises.

A look at the facts: We have a distribution problem, not a quantity problem. There would be enough for everyone. In Germany, we use around 60 percent of the almost twelve million hectares of arable land for animal feed, but only 20 percent directly for human consumption.

In addition, there are another twelve million hectares that are “occupied” in other countries by Germany, also fundamentally for animal feed such as soybeans from South America. The fact is that for years we have been producing enough food, calculated in terms of calories, and yet 800 million people are starving right now.

Hungry people first need urgent help, but the next step is a different agricultural policy so that they can feed themselves better than they do today in their regions. For this, other food systems must be installed there.

80 percent of deforestation is due to food production

However, this also means that our food system and the EU’s agricultural policy are facing an immense challenge: the climate crisis will not be long in coming, the extinction of species is progressing, the degradation of previously fertile soils is dramatic.

Today, 20 to 40 percent of the global land area is already degraded, generating annual costs of around €50 billion. Global warming of two degrees Celsius would lead to a 10 to 50 percent reduction in wheat harvests in much of the world.

According to Munich Re, climate catastrophes have cost around $4.2 trillion since 1980 (not including disrupted supply chains) and no one would seriously argue that the climate crisis will make this worse.

Crises reinforce each other. Food production accounts for 80 percent of deforestation, about 30 percent of global greenhouse gas emissions, and 70 percent of freshwater use.

Intensive agriculture is one of the main causes of the dramatic loss of biodiversity due to monocultures, the use of energy-intensive fertilizers and pesticides. However, pollinating insects are one of the foundations of the future of nutrition.

>>> Read here: 40 million tons of grain are stored in Ukraine: how wheat should leave the country

It has not affected agribusiness profits, which continue to post record sales. However, the promises made by the agrochemicals and seed companies only serve their own interests, their promises have not been fulfilled for the local population.

South American, African, and Asian countries have degraded their farmland and forests for our tanks and watering holes. In the process, their own nutritional interests have been left behind. There is poverty and hunger.

We must preserve what nourishes us

Food safety must ultimately look at the entire system. It is no accident that the international debate is about building or maintaining food systems and not just about short-term aid.

Right now, we are producing and consuming a lot of the wrong things, which is leading to unprecedented environmental destruction and hunger on the one hand, and lifestyle-related diseases like diabetes and obesity on the other.

With the Planetary Health Diet developed by the EAT-Lancet Commission, ten billion people could eat healthily without crossing planetary boundaries. To do this, however, it would be necessary to double the consumption of legumes, fruits, vegetables and nuts, and halve that of meat and sugar. So instead of just looking at the sheer volume of produce, let’s take a look at the global distribution and diversity on our plate.

In the current crisis, we urgently need to increase humanitarian aid, for example to the World Food Programme, and ensure that markets remain open. This is the only way to avoid massive price increases and help the poorest of the poor.

Anyone who wants to suspend sustainable agriculture is now endangering the basis of food production.

Food poverty in Germany, one of the richest countries in the world, is also a symptom of poverty for us. A sensible measure that can point the way to a better food system is the reduction of VAT on plant-based foods such as legumes, cereals, fruits and vegetables.

Another measure should be to end the mixture of agrofuels. The ecological footprint of the products, and therefore the real costs for all of us, must finally be made visible. We must combat food waste and significantly reduce the number of animals in captivity.

If pigs raised in Germany were reduced by 20 percent through increased animal welfare, about a million tons of grain would be available for direct human consumption.

Of course, this also requires a lower consumption of animal products. Out-of-home catering has an important model and guiding function, because millions of people eat every day in the canteens of administrations, hospitals, universities, schools, nursing homes and nurseries.

The power of demand that exists here already has a decisive influence on what is produced. It is our responsibility to harmonize existing demand with all other policy goals, such as climate goals, biodiversity and future regional value creation.

Whoever wants to suspend the greening of agriculture now is actually endangering the foundations of food production and farms. The motto should be: Preserve what feeds us. The attack on Ukraine exacerbates world hunger, but it also shows ruthlessly unfair international agricultural structures. Changing that is what matters now.