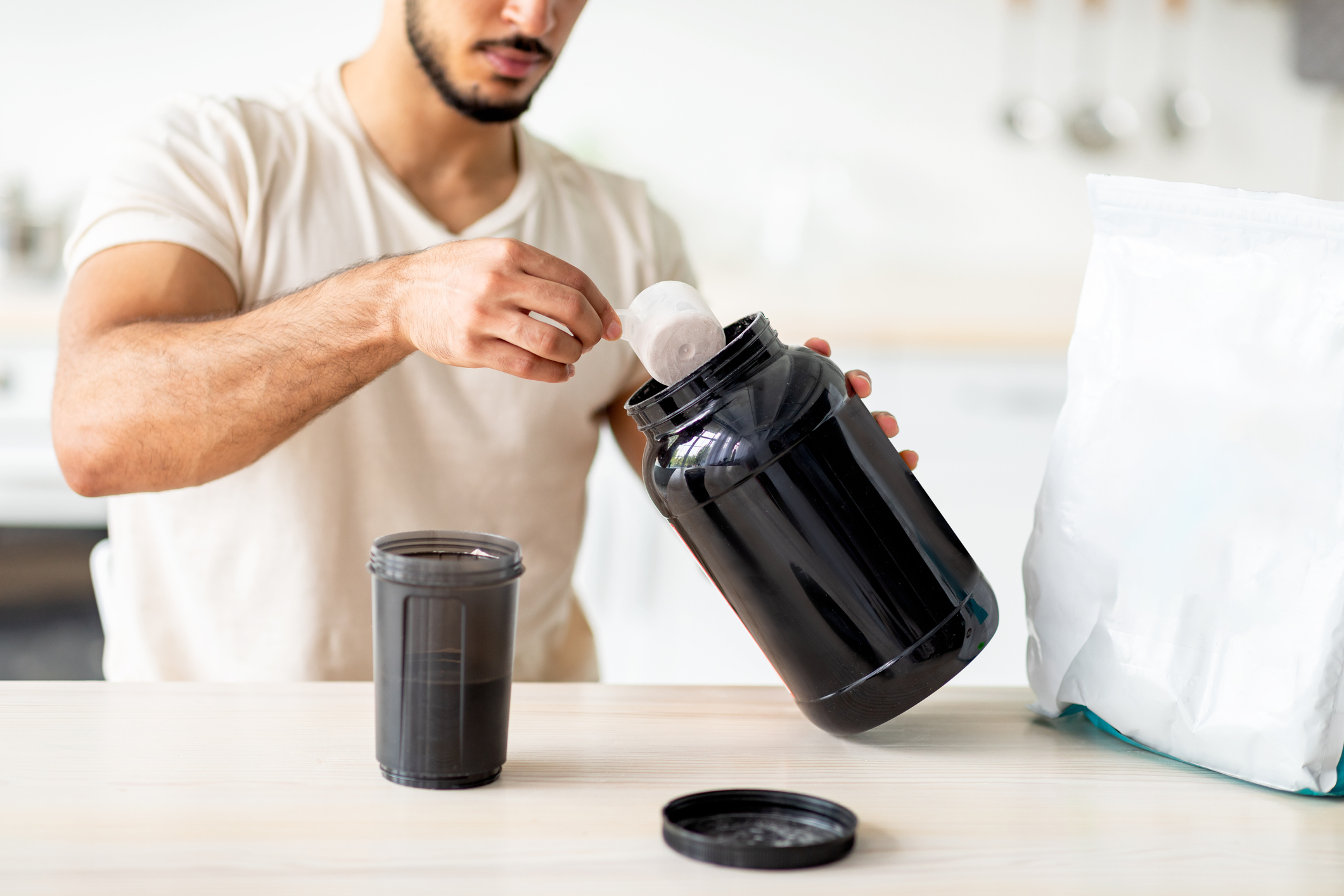 Creatine occurs naturally in human muscle tissue, but is also often promoted as a dietary supplement. It is said to accelerate muscle growth and increase performance in sports.

According to experts, vegetarians in particular can benefit from supplementation. All in all, the additional creatine prevents rapid fatigue during intense exertion. Creatine also appears to prevent muscle damage.

The Efsa and the consumer advice centers allow the product to have these performance-enhancing effects, but only under certain conditions, such as correct intake. It is important, for example, that you drink a lot when taking it. People with kidney disease should avoid creatine altogether.

When you work out in the gym these days, two words come to mind over and over again: protein and creatine. While the first term is familiar to most, the second is a bit less familiar. Creatine is said to help build muscle fast and increase performance – great promise. We’ll tell you why athletes like to use powdered or capsule creatine products and why they should be used with caution when in doubt.

What is creatine? What is it for? Where it happens?

The term creatine is derived from the Greek word “kreas” and means something like “meat.” This makes sense when you know that French chemist Michel Eugène Chevreul first discovered the substance in 1832 as a component of meat broth. The German chemist Justus von Liebig also detected the substance in the meat of several species of mammals in 1847.

Creatine is therefore a substance that can be ingested through food in the form of meat, but also fish. But it also occurs in the human body itself. The carbon-nitrogen compound is formed in the liver, pancreas, and kidneys with the help of various amino acids.

Creatine plays an important role in the energy metabolism of the skeletal muscles of the human body and is particularly effective during short-term muscular work. This means that endurance muscles don’t benefit from creatine, but sprint muscles do.

If you want to take creatine, you should mainly use fresh fish, meat with little connective tissue (steak), or dried meat. Here you can find up to 0.5 grams of creatine per 100 grams. Currently, vegetarians can either wait for creatine to be added to meat substitutes or turn to creatine supplements.

How Creatine Works: How the Body Produces Its Energy

The question of why and if creatine should be supplemented divides the sports community as well as research. To progress through this, you must first understand how creatine works in the human body.

In general, the human body needs energy to move. This energy is released in muscle cells by splitting ATP (adenosine triphosphate) into ADP (adenosine diphosphate) and phosphoric acid.

The problem: the ADP supply runs out in a few seconds. If the body now needs more energy, for example because it is supposed to perform during sports, additional energy can be obtained from creatine phosphate. That happens in the liver, from creatine and phosphate. Creatine phosphate ensures that ADP is converted back into ATP: the body has new energy reserves again.

Athletes who take creatine supplements (either through diet or supplementation) want to interfere with this process and further increase creatine phosphate in their muscles. Simply put, they cause faster muscle growth and increased performance. By the way, what sounds like doping here is not.

Everyone needs different amounts of creatine, depending on physical activity. The normal daily requirement for creatine does not usually require supplementation, but is covered by a balanced diet.

However, many athletes rely on creatine dietary supplements. And, in fact, supplementation in the context of demanding training has not been shown to be detrimental. This is shown, among other things, by an evaluation by Efsa, that is, the “European Food Safety Authority”.

In a report, they confirm that creatine supplementation can lead to increases in muscle mass, muscle strength, and muscle performance. They identify three grams of creation per day as a necessary condition for this positive effect. You can read the full report here.

A superfluous product? That means that the consumption center

The consumer advisory center has also taken a closer look at creatine and is confident that it can have a positive effect on muscles and performance, but not for everyone and not without accepting the expected side effects. According to experts, the effect depends on the age, the type of sport practiced, the level of physical fitness and the dose.

Accordingly, vegetarians in particular can benefit from supplementation and expect an increase in their body’s creatine content. They also believe that the additional creatine increases maximal strength and prevents rapid fatigue during intense exertion. This allows for more intensive training sessions. Furthermore, creatine seems to prevent muscle damage and therefore ensures that you recover faster and can continue training.

Despite these expected positive effects, the consumer advice center urgently warns against the inappropriate use of creatine. If in doubt, this could endanger not only performance, but even your own health. Athletes who also take creatine should be checked regularly by a doctor.

Additional creatine can work, but only under these conditions

There are currently two health claims approved by the European Union related to creatine. These are health-related advertising promises that are scientifically substantiated. The first claim promises that creatine “increases physical performance in explosive strength training as part of short-term intensive physical activity.” However, it should also be made clear on the product packaging that it is only intended for adults who exercise regularly. In addition, according to the consumer advice center, the product must provide three grams of creatine per day, since only then can positive effects occur.

The second claim appeals mainly to those over 55 years of age. Strength training at least three times a week for several weeks is necessary for daily intake of three grams of creatine to have a positive effect on muscle strength. The consumer center also points out that creatine must always be present as so-called creatine monohydrate. The possible performance increase only applies to this connection, which, by the way, does not happen. I have to.

These are the side effects that creatine supplementation can cause

Instead, side effects can also occur. The most common are gas, diarrhea, nausea, vomiting, muscle cramps, and fluid retention. The latter can also lead to weight gain. These negative effects mainly occur when too high a dose of creatine is selected.

Research is also looking at whether creatine as a dietary supplement has negative effects on organs such as the kidneys. People with kidney disease or an increased risk of kidney disease are advised not to take additional creatine.

If you decide to supplement with creatine, you should also make sure you drink enough of it. Creatine ensures that the muscles remove water from the body. In addition, water favors the absorption of creatine.

There is no way to avoid trusted providers

Finally, when shopping for creatine products, you should trust reputable vendors. Creatine is now also available in liquid form, as a stick, or as a chewable tablet. However, in most cases, these products are not very effective compared to powder. This is because liquid creatine turns into the breakdown substance creatinine after a while. Chewable bars and tablets, on the other hand, are taken with very little water, so there is no effect.

Quality should be the number one priority when buying creatine. This is the only way to prevent the dust from containing questionable and potentially harmful substances. For example, providers who want to save money neglect the removal of impurities. Therefore, it is advisable to trust suppliers from Germany and read product tests. Depending on the manufacturer and the packaging, creatine monohydrate powder costs between 50 and 80 euros per kilogram.

Creatine May Work, But It Doesn’t Have to

We note that creatine occurs naturally in the human body and can be further enhanced by a balanced diet. Even those who exercise regularly and intensively do not have to expect any deficiency symptoms. Therefore, an additional intake of creatine is not necessary. However, if you want to gain muscle mass quickly and increase your performance, you can consider creatine as a dietary supplement. However, you should follow the recommendations of the consumer advice center and, if in doubt, seek the advice of a doctor.