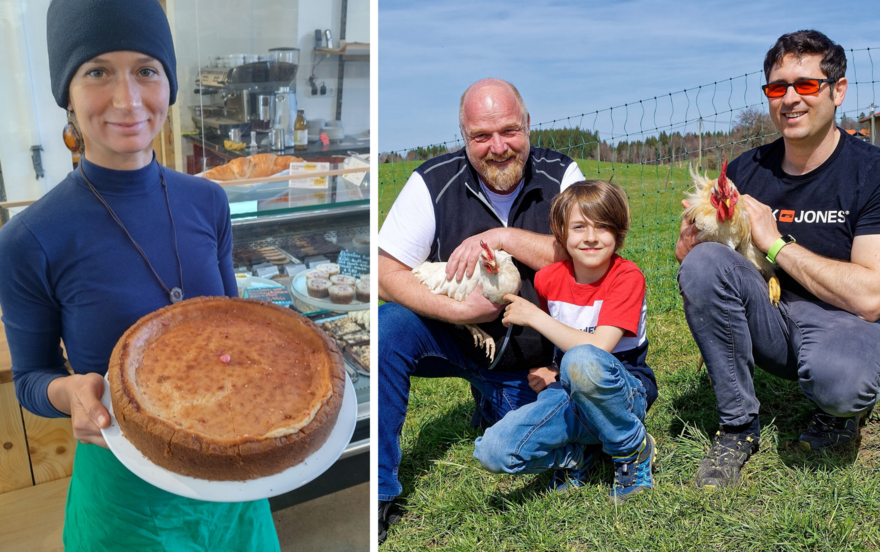 Two women from Immenstadt and Kempten explain why they follow a purely plant-based diet. That’s out of the question for chicken farmer Markus Speiser.

Easter Egg? No thanks. More and more people are eating vegan. They eat purely plant-based: no meat, no dairy, no eggs. According to the Federal Ministry of Agriculture, two percent of Germans completely abstained from animal products in 2021, twice as many as the previous year. Daniela Faust’s Easter breakfast from Immenstadt also contains no animal products. “With full conviction,” says the 33-year-old.

Vegan food is best for the environment and good for your own health, says Faust. Above all, however, ethical reasons are in the foreground for them. “I can’t pet the cat and accept that the cow is being slaughtered,” says the Immenstadt resident, noting that animals have feelings like fear and pain. In Easter It is not difficult for her to do without eggs. “There are countless plant-based alternatives,” she says.

Vegan substitutes based on peas, sunflowers and cereals

The food industry has also discovered vegan food as a trend. Supermarkets are awash with pea protein schnitzels, sunflower sausage substitutes, vegan ground beef, and countless cereal, soy, and nut drinks. According to an industry service, citizens in German supermarkets spent more than twice as much on vegan products in 2020 than in 2018.

From the point of view of head chef Nina Meyer, plant-based sausage substitutes are definitely justified. Such substitutes are good for people starting out with vegan food. “First it has to work for her,” says the trained cook, who works on the stove at the Berghotel Ifenblick in Balderschwang. However, it is important for her to cook without these industrially produced foods if possible, because they contain preservatives and dyes. For her cooking, the 41-year-old was one of 25 cooks in Germany to be recognized as “Top Organic Chef” by the federal organic farming program. At Easter brunch at the Berghotel Ifenblick, she serves a vegan galette with yellow turnips and scrambled eggs with tofu.

Eating vegetarian is fine for him, but “I couldn’t eat vegan,” says Markus Speiser, who raises 480 chickens near Vorderburg (municipality of Rettenberg) together with his son-in-law Alessandro Zerbo. Eggs are a natural source of protein for him, says Speiser. However, his egg consumption is limited. Usually he eats two of these on Sundays. Also, there are the eggs that he needs to cook.

Speiser also attaches great importance to animal welfare. For him, however, this does not mean doing without animal products, but caring for his chickens in a way that is appropriate for his species. In his opinion, mobile barns are the only way to keep a larger number of animals. After the eggs are laid, the barn door opens automatically at 10 am so the hens can go out to graze. Each week a different piece of meadow is added. That prevents disease and germs, says Speiser. Half an hour after sunset, the door automatically closes again.

According to its owner, the 480 hens only receive grass and organic laying meal to eat. The result: a full-bodied, yellow egg yolk that retains its color after cooking and an egg white that retains its shape after beating, Speiser raves.

For Evelyn Rill from Kempten, how the animals whose products are eaten are kept is crucial. At best, she can understand someone enjoying a roast on a Sunday or a cupcake on a holiday. “But I don’t need it myself,” emphasizes the 29-year-old. She is a holistic nutrition consultant, convinced vegan and works at the organic shop Purnatur in Kempten. Rill rejects the consumption of animal products for ethical and environmental reasons, but also for health reasons. The quality of animal products has decreased significantly in recent decades. “They harm the body more than they benefit it,” says the nutritionist. There are numerous starch-based egg substitutes, she Rill says. But she didn’t try it herself. Because too many vegan substitute products are unhealthy because they are highly processed.

Daniela Faust also uses natural ingredients. You can easily skip the egg from the Easter braid. According to her, even pancakes are a hit if you only use (vegan) flour and milk. “That’s all it takes,” says the 33-year-old. The gluten in wheat and other gluten-containing foods is entirely sufficient to give baked goods the proper consistency. And if someone wants to add egg flavor to a dish, he recommends Kala Namak salt. This is a natural sulfur salt from India. A small pinch gives dishes the typical egg flavor.

You always want to have the latest news from the Oberallgaeu to be informed? Subscribe here to our free daily newsletter “The day in Oberallgäu”.