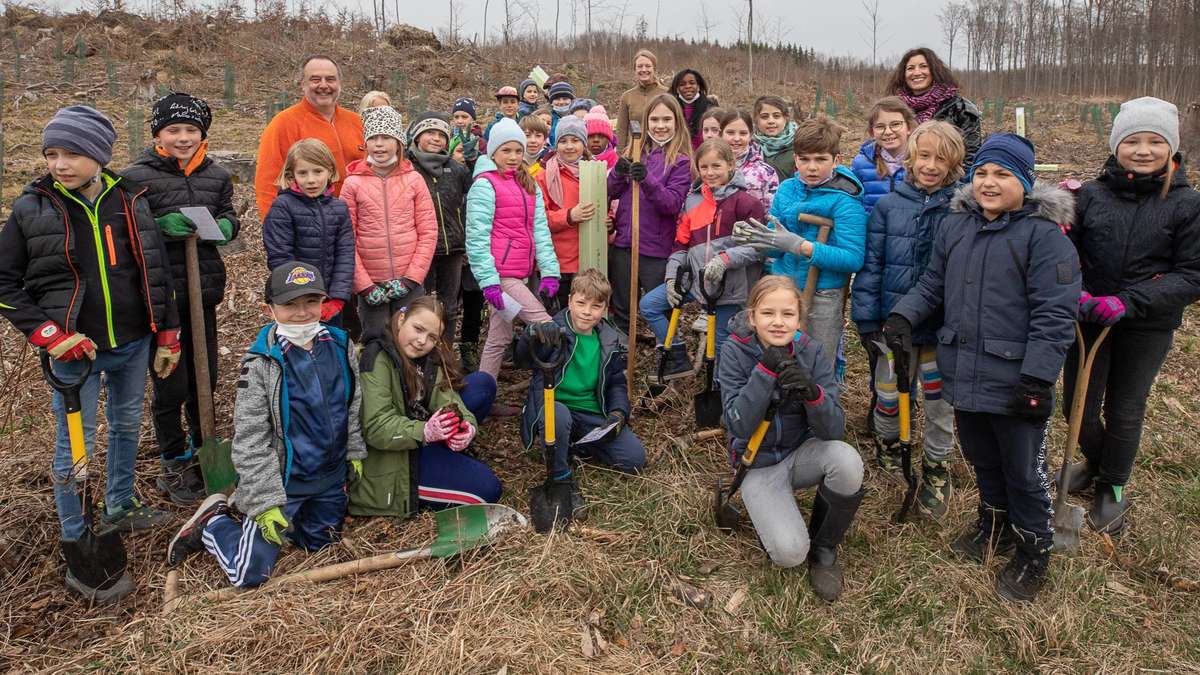 Participate instead of just watch: According to this motto, 40 Inning Elementary School students each planted a sapling last week: serviceberries. They want to make their contribution to actively participate in the protection of the climate and the environment. Sponsor and organizer of this planting campaign is the Office for Food, Agriculture and Forestry Fürstenfeldbruck (AELF).

Inning – “We are happy to help out here and give the young chess berry seedlings a new home,” says Anja Wagatha, deputy principal at the primary school. Anja Wagatha, who is also on the CSU city council, learned about the campaign two years ago from her parliamentary colleague Günther Kammerloher. “He made contact. And we actually wanted to do that last year,” she says. Like so many things, this could not take place because of Corona. This time the traffic light was green in two directions. And the organizers and the children too they were lucky with the weather, he rejoiced.Because as soon as the young rangers got back to school, it started to rain.

“It was special for the kids,” she says. Everyone was very excited, even the trail through the woods was a bit of an adventure. Judith Clever oversaw the campaign as project manager at AELF. “For us it is important that young people feel the environment, the climate and the forest. With our planting campaign, we are making a valuable educational contribution that is well received by children, teachers, and parents,” she says. The small service berries were donated by the utility company Fürstenfeldbruck. For many years, the energy provider has been committed to the reforestation of regional forests and the resettlement of native plants. In total, it has already sponsored more than 4,000 seedlings in collaboration with the AELF. In particular, the focus is on tree species that are native to the region but have hitherto been quite rare. These include the service tree, which is suitable as a mixed tree species in the forest of the future. Alexander Dietz, the forester of Count Toerring, in whose forest area between Bachern and Walchstadt trees were planted as tree boundaries directly on the road, accompanied the campaign. The seedlings were spread over about 1,000 square meters and covered with a protective film. “Four years ago we planted service berries on the connection route from Bachern to Inning,” says Dietz. Also in collaboration with the AELF. “They are growing well,” he says happily. The trees are three meters high. They can grow up to 30 meters high. Wood is very valuable, Dietz knows. It is used, among other things, to make instruments.

“The service tree has our special attention. It is currently experiencing a renaissance as a highly endangered native tree species,” explains Gero Brehm, head of the AELF forestry department, who also accompanied the campaign four years ago. It makes no special demands on the soil, prefers warm, bright places and tolerates drought and summer heat better than other trees. Only the top of the tree needs enough space to receive enough light. In May, the flowers attract numerous insects. In autumn the foliage turns yellow and orange. Backgrounds that children now know and can observe exactly how their trees will develop in the future. A laminated poster on which the children have written their names shows which tree was planted by whom and which one now hangs from the sapling. However, they are only one or two years old and still small.