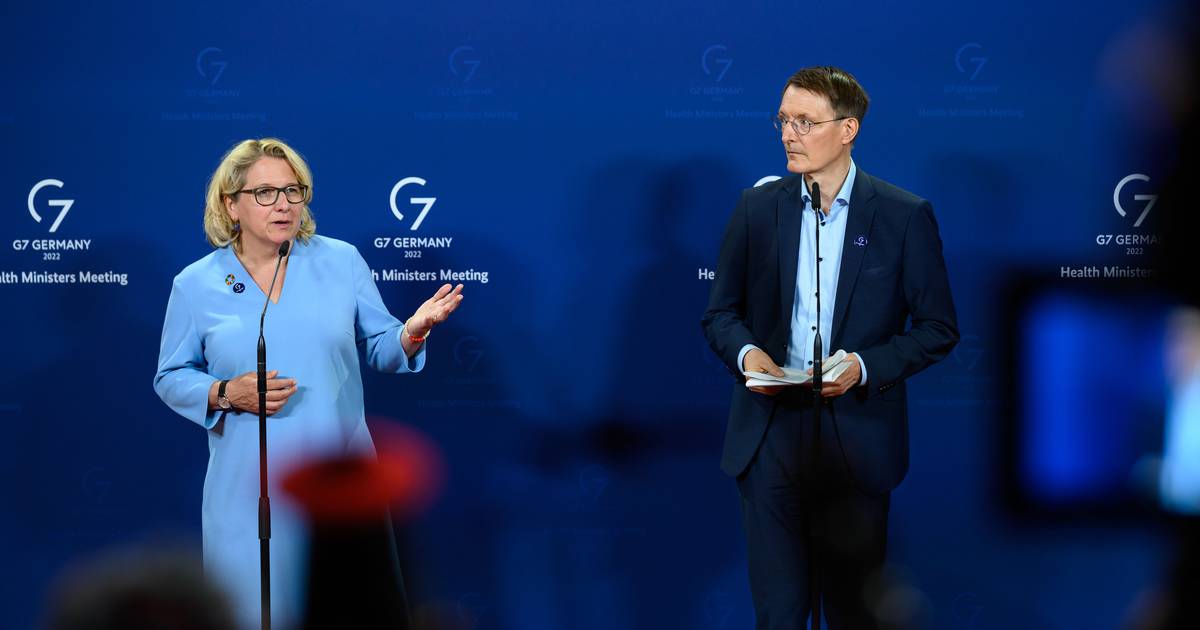 The war in Ukraine continues. Russia is using hunger as a weapon there, accusations from the West. Under the German presidency, the G7 development and health ministers are promoting an alliance for global food security and want to push the development of vaccines against the pandemic.

The government has swarming. Partly anyway. Annalena Baerbock is at the United Nations in New York. Christian Lindner consults with the G7 finance ministers in Koenigswinter. In the Bundestag, Chancellor Olaf Scholz will make a government statement on the EU summit next week. And in Berlin’s Red Town Hall, Karl Lauterbach and Svenja Schulze, Ministers for Health and Ministers for Development, sit alongside their G7 colleagues. In just over five weeks, Scholz will host the next G7 summit in Elmau, Upper Bavaria. Earlier, several of his ministers paved the way for Elmau. The war in Ukraine, its consequences for global food security and ways to contain the conflict play a role everywhere.

But there is still another fight that is not over: the pandemic. At the meeting in Berlin, Federal Health Minister Lauterbach and his G7 colleagues agreed to further develop vaccines and have them stockpiled in large quantities so that a change in the corona virus and future outbreaks can be reacted more quickly and effectively. of infection. than it could have been before. Both Schulze and Lauterbach warn against negligence in handling the coronavirus: “This pandemic has not yet been defeated. In the world’s poorest countries, only 15 percent of the population has been vaccinated.” The point is to bring refrigerators to store the vaccine, syringes and training for health workers. According to Schulze, the production of vaccines must also be established directly on the African continent.

Because Lauterbach and Schulze, who have a particular eye on the poor global south, know that the next wave of corona will definitely come, in Germany no later than autumn. That is why the vaccination centers in this country must not be dissolved, but must remain in place. “And the Infection Protection Act will also be reviewed,” says Lauterbach. In addition, specialists will be trained within the framework of the G7 who can quickly and reliably assess the dangers of the next waves of infections, Lauterbach announced one day when the Robert Koch Institute was still registering almost 59,000 new infections in one day.

Meanwhile, the G7 development ministers, meeting for two days in a backyard in Berlin’s Wedding district, agree on an alliance for global food security that host Schulze announced earlier the day before. The purpose of this alliance is to provide additional money and coordinate international aid, also to respond to the global shortage of grain as a result of the war in Ukraine. Russia has been blocking the export of ships carrying wheat from Ukrainian ports for weeks. This would drive prices up around the world. There was also the risk of famine in Africa and the Middle East. Ukraine is considered the breadbasket of Europe. Schulze warns: “There is a risk of famine because Putin is using hunger as a weapon.” She and also: “If we do nothing, the worst famine since World War II is imminent.” The SPD politician assures: “The G7 has the other crises. Do not forget the world.” At the G7 foreign ministers’ meeting in the Baltic Sea a week ago, Foreign Minister Baerbock spoke of a “grain war” that Putin had also instigated.

After consulting with his Ukrainian counterpart, Federal Health Minister Lauterbach wants to help set up trauma centers in the war-torn country within the framework of the G7. Ukraine is also in need of prosthetic limbs because many civilians, including a surprising number of children, have lost legs or arms to Russian rocket attacks. Hospitals were bombed, medicines were lacking. Here, too, the G7 countries wanted to lend support.