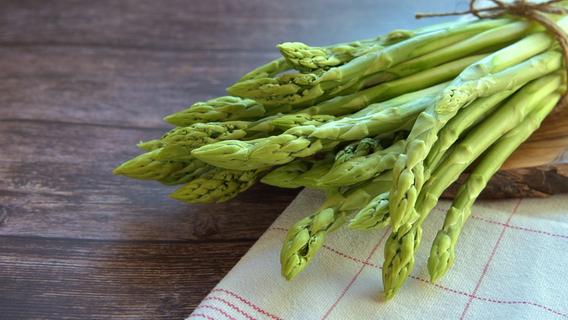 – Many people are already looking forward to the asparagus season. Green asparagus not only tastes delicious, but is also very healthy. How do you prepare green asparagus?

Do you have to peel green asparagus?

During asparagus season, people are increasingly asking the question “Do I have to peel the green asparagus? Green asparagus has the great advantage that in most cases it is not necessary to over-peel it. That ultimately depends on how it was harvested. If the bottom third is whitish-purple and woody, it’s best to peel the asparagus and cut off the dry end. The white end of asparagus has yet to see the sunlight and remains firm and inedible even after cooking.

Instead of cutting off the bottom of the asparagus, you can easily break it off. Since the inedible part of asparagus cannot be broken, asparagus broken above the end. Ideally, the asparagus should be fresh and crisp.

Advice: It does not matter if it is white or green asparagus, the bottom end should always be cut off.

Should I peel thick green asparagus?

In fact, the thickness of the asparagus plays an important role. Thick green asparagus has a tougher skin and often has a bitter taste. Therefore, it is advisable to peel the lower third. You don’t need to peel the top end though, as the asparagus gets thinner on top.

Why don’t you peel the green asparagus?

If the asparagus is thin, you should not peel the asparagus so that important healthy nutrients are preserved. The ingredients contained in the shell would be lost when peeling the thin skin. In some varieties, the stems are so tender that they just need to be rinsed with water.

Do you have to cook green asparagus?

Advice: A pinch of sugar in the salt water neutralizes the bitterness of the asparagus.

If you want to fry your green asparagus, you can do it easily Heat a little cooking oil or fat in the pan and add the green asparagus to it.. Cut into small pieces, it’s ready to eat after just five minutes. The roasted aromas ensure that the superfood has a particularly full flavour. After preparation, it can be used in a crispy salad, for example.

Asparagus is also great for grilling. You can eat asparagus with ease Place on the grill for about ten minutes. and then enjoy the crispy asparagus.

Asparagus is suitable for both a baked casserole and asparagus soup. The woody ends of asparagus can also be used for soup and can be boiled as a stock.

– Seasonal and regional purchase
– Fresh asparagus is crispy and cannot be bent
– The interfaces should not have dried out.

When is asparagus time?

Green asparagus grows in Germany from April to the end of June or beginning of July. Out of season, it is exported from abroad, mainly from the Mediterranean countries of Spain, France and Italy. That is why asparagus is now available in supermarkets throughout the year.

What is the best way to store green asparagus?

Asparagus tastes better fresh. However, if you wrap the sticks in a damp kitchen towel, you can store them in the fridge for three to four days. You can also use green asparagus easily freeze and in the freezer store for about six months. You should prepare the asparagus ready to cook and then freeze it raw.

How healthy is green asparagus?

Vitamins B, C, and E strengthen the immune system, and vitamin K also supports bone and tissue formation. Green asparagus also stimulates metabolism and has a hypotensive effect. Potassium, saponins and the amino acid asparagine ensure that the body releases water retention will be. Magnesium, iron and calcium have one purifying effect.

What is the difference between green and white asparagus?

In the sun, green asparagus produces chlorophyll, which gives it its color. In addition, it becomes stronger and more intense in flavor. Unlike white asparagus, it is not necessary to peel them completely because the skin is thinner and more tender.