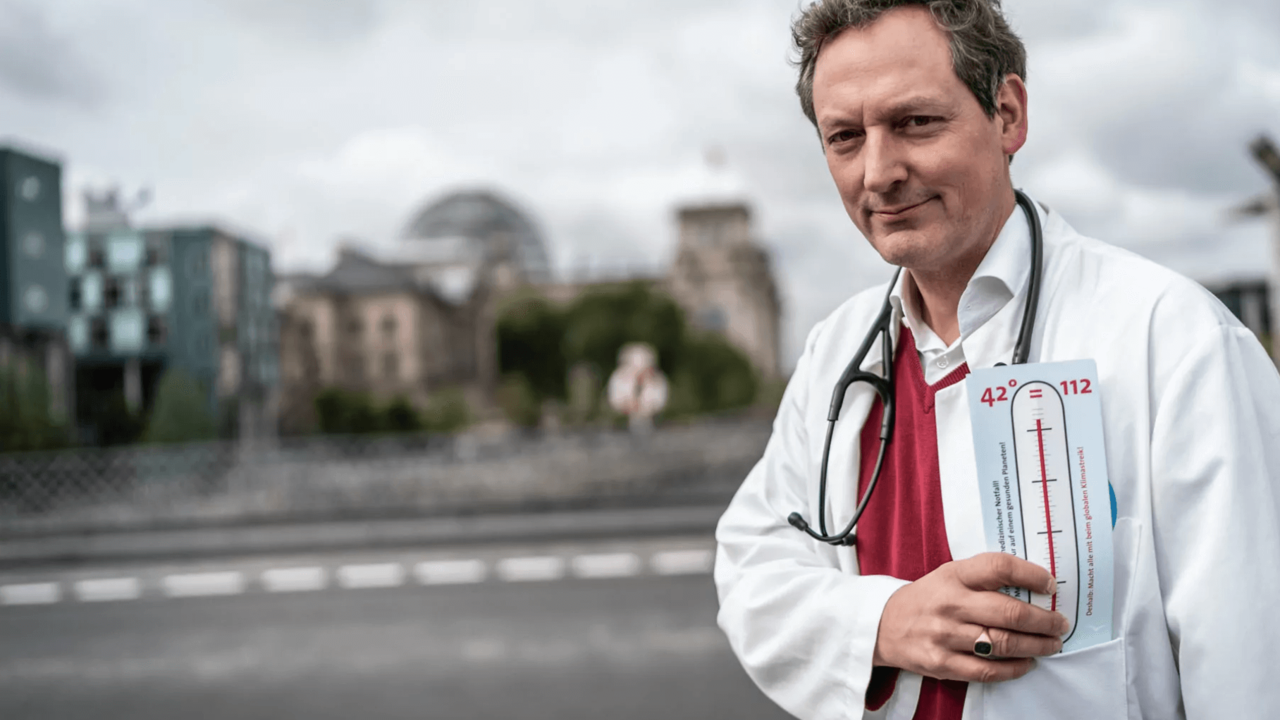 Corona, climate, consumption: how are the main problems of our time connected? Eckart von Hirschhausen talks about this in an interview and recommends a special form of plant-based nutrition.

Eckart von Hirschhausen is a physician, science journalist, author, and founder of the Healthy Earth – Healthy People Foundation. In his non-fiction books he conveys his expertise as a doctor in a playful and humorous way, but also makes an enlightening claim. His latest book “Mensch Erde! We Could Have It So Good” is about the risks of climate change to human health.

Zoonoses: is meat consumption to blame for pandemics? see ours here Video with Eckart von Hirschhausen

In this context, Hirschhausen founded the “Healthy Earth – Healthy People” (GEGM) foundation in 2020. It is to contribute to putting the so-called One Health Principle into practice and work towards a healthy interaction between humans, animals and the environment. In an interview Hirschhausen reveals why this is particularly important in the context of the corona and climate crisis and how it can work in detail.

The health of people and the environment are linked

Utopia: Mr. Hirschhausen, the central idea behind your foundation “Healthy Earth – Healthy People” is the One Health principle. What does that mean exactly?

Hirschhausen: The One Health approach describes the idea that human, animal and environmental health are intrinsically interrelated. One Health is a bit like world peace: nobody has anything against it, but the way to get there is, of course, complicated. But for me, as the founder of the “Healthy Earth – Healthy People” foundation, this international research on Planetary Health and One Health is actually a giant step in tackling together the three crises that concern us in the 21st century. This is the pandemic, this is this species extinction and of course especially the climate crisis.

To what extent are the crises mentioned related to the state of our environment?

In a healthy ecosystem there is always a fragile and flexible balance. If it gets upset, there are consequences, and people very often upset the balances: through air and water pollution, through deforestation, through urban sprawl. According to the WHO, 23 percent of global deaths each year are related to an unhealthy environment. Thank goodness he finally got politics in Glasgow busy. [Anmerkung der Redaktion: In Glasgow fand vom 31. Oktober bis zum 12. November 2021 die UN-Klimakonferenz statt.]

In connection with the corona pandemic, zoonoses are mentioned again and again. What are these diseases and how do they develop?

Zoonoses are not diseases caused by zoo keeping, but are basically animal viruses that are transmitted to humans, or other pathogens, there are also bacteria and other parasites.

There are many zoonoses, and what we often forget is that the last 50 years have been shaped by other pathogens in the animal kingdom. HIV, the pandemic of my youth, which had a major impact on this, was also transmitted by monkeys and chimpanzees. Ebola, Zika, many, many other viruses are from the animal kingdom. This means that zoonoses are becoming more frequent, more serious, and “in the pandemic” means “before the next one.” Sorry to put it that way, spoiler alert, but it won’t get any better if we don’t act.

Healthy land – healthy people: This has to be done

What options do we have for action?

Point number one: ban the wildlife trade! In Asia and Africa in particular, bushmeat and live wild animals are sometimes illegally sold in markets with other livestock. The species come together, bleeding, in their secretions. It’s disgusting, it’s really painful sometimes to look at these photos. But still: it is a reality.

There are often poor hygienic conditions there, making these markets great hotbeds for broadcasting. The combination of animals that comes together was never thought of in nature. A healthy wild animal does social distancing on its own. That he retires when he has the opportunity, that is, to have a retirement, a habitat.

How can we ensure that such withdrawals are preserved?

Protect ecosystems! We are destroying forests and landscapes and penetrating more and more into nature. This endangers intact ecosystems, there is more contact between people, and of course, poverty between people also plays a very important role.

Humans, when they are so desperate and malnourished, eat animals that are visibly sick. So, for example, even during the pandemic, people from cities return to the countryside, look for food, and wild animals are in double danger. Therefore, diseases can be more easily transmitted from animals to humans.

Do only wild animals pose a risk of transmission to humans?

We’re not just talking about wild animals, we’re also talking about livestock. When was the last time you had a big carrot scandal?? You do not remember? Yes, most food scandals have always been meat-related scandals. And therefore, point number three: change to one plant based diet.

Two days ago it became known that hundreds of employees of the largest slaughterhouse in Germany were infected with the corona virus. A secret apparently…

How can a healthy plant-based diet be implemented?

The idea of ​​a “Planetary Health Diet” combines what is good for the body with what is good for the planet. This is, above all, much less meat, less sugar, less animal products in general, and more nuts, legumes, colorful vegetables. The more colorful, regional, seasonal, the better.

You can’t dictate that to people, but you can watchwrite, because The health benefits of a plant-based diet are gigantic. According to the Lancet Climate Countdown, we could prevent 150,000 deaths each year in Germany. That’s why giving up meat is a real giving up, meaning giving up heart attacks and strokes, and I’m so happy to give that up.

By the way: From the “Healthy Land – Healthy People” team we are doing the “Veganuary” in January, that is, a month without animal products, just to try. I’ve never done it myself, to be honest, but I’m curious. Maybe you too will join us and talk about how it worked on social media, Utopia or GEGM.

The Veganuary challenges us to live vegan for a month. What is behind the challenge, what does it bring and…

What tasks would you like to tackle with the GEGM Foundation in the future?

So: the prevention of zoonoses is above all a global task and the One Health approach is crucial for this. Fighting for this approach not only in public but also behind the scenes is a mission where there are still many, many opportunities for cooperation. With my foundation “Healthy Earth – Healthy People” we are also working on this, and we are very, very proud that the coalition agreement has really managed to include the One Health approach. And now he just has to go out into the world. After all, there are only healthy people on a healthy planet.

Thank you for the interview!

More information about its principles and current activities can be found on the Fundación Tierra Sana – Gente Sana website. If you want to support the foundation financially, you also have the option to make a donation there.

Eckart Hirschhausen also describes more about the connections between an intact environment and our health in his book “Man Earth! We Could Have It So Good”. Available** p. eg in book7, Thalia either Amazon.

Tags: nutrition news how to video