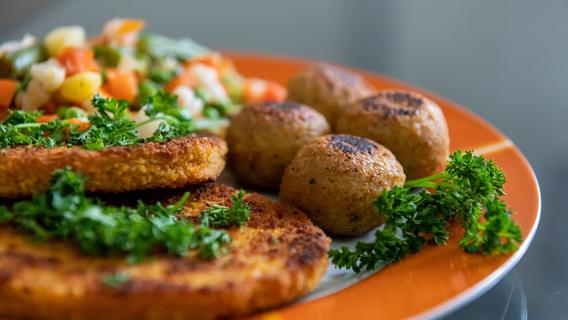 – Substitutes for steak or tofu are increasingly making their way onto supermarket shelves. But what is it like in East Germany, where meat is traditionally served more often?

Whether it’s seasoned beef, solyanka or Thuringian bratwurst – a number of meat dishes from the GDR era still have cult status in East Germany today. According to surveys, vegetarian or vegan diets are much less common here than in the West. Soy schnitzel or oat milk have it harder.

However, eastern retailers are also noticing that the market for vegan or vegetarian substitute products has picked up. The only question is how long the hype will last, also in view of the war.

Across Germany, market growth rates for vegetables have been immense recently: Retailers report double-digit percentage increases in sales for 2021. According to the Federal Statistical Office, the value of goods produced increased by 37 percent. from 2019 to 2020. At around 375 million euros, it was still a hundred times lower than the value of all meat products produced in Germany.

But is the cautious trend towards vegetarian sausages still reaching the East? “Overall and as a whole, the demand for vegan products in the western part of our sales area is higher than in Saxony and Thuringia,” says Germany’s largest food retailer Edeka, who also refers to similar structures in the north of Bavaria. In the eastern urban centers, however, demand is picking up. Rewe also recorded an increase in sales in his sales area in eastern Germany for 2021 “in the higher double-digit percentage range” compared to the previous year.

Lowest proportion of vegetarians and vegans in the East

According to figures from the Federal Ministry for Food and Agriculture (BMEL), in 2021 nearly one in three people in western Germany often used vegetarian alternatives to animal products, compared to one in five in the east. The proportion of vegetarians and vegans was 14 percent in the West and 9 percent in the East.

For food culture researcher Gunther Hirschfelder, there are historical reasons for the difference. “From the 1950s, in both the FRG and the GDR, meat was considered a symbol of healthy living, strength and masculinity,” says the professor of comparative cultural studies at the University of Regensburg. In Germany, meat was initially hesitant in the 1970s, but then became increasingly scandalized. In the GDR, on the other hand, the leadership tried to keep meat available despite economic scarcity. “Systems that are under pressure and that have authoritarian traits would do well to allow a population to have things like meat and alcohol.”

After the fall of communism, the younger and more innovative sectors of the population, who had promoted vegetarianism, went west. What was left was an older, more masculine population with a much lower income. These factors tended to favor a high consumption of meat. Furthermore, regional identity is often more important in the East than in the West because it is more threatened. “And that means that people tend to support traditional products.”

Anyone who wants to know what the vegetarian trend is like in the east can find what they are looking for in the Thuringian town of Gößnitz, with a population of 3,000, on the border with Saxony. Claudia and Uwe Lahl do something there that you wouldn’t necessarily expect in the bratwurst state: smoked vegan cheese. With their manufacturing, they are a long way from retail sales volumes. As a direct marketer, they are closer to the customer.

“People have definitely become more tolerant,” says Claudia Lahl. When they started their factory in 2017, there was almost no choice in supermarkets either. That has changed. Meanwhile, they are asked for people between 20 and 60 years old, and they are not looked at out of the corner of their eyes. But what you notice in rural areas in particular: there are far fewer stores that offer vegan or vegetarian products.

Retailers also report the urban-rural divide. At Edeka, a particularly large number of replacement products are sold in Dresden and Leipzig, a spokeswoman said. This can also be seen in cities with a high proportion of students, such as Jena.

Food culture researcher Hirschfelder doesn’t think the trend toward soy schnitzel is prevalent across the board in the East. In the foreseeable future, society will not only feel the economic consequences of the Corona crisis more, but above all the consequences of the war in Ukraine. “We see that overvaluing food is a phenomenon of opulence.” In addition, there is the debate about sustainability: meat substitutes in particular are mostly highly processed foods with long delivery routes. “One can only wait for them to be attacked by the media.”

He also touched on the stock market: US producer Beyond Meat’s stock had repeatedly failed in the recent past and had to accept severe price losses. And the price of Berlin-based manufacturer Veganz also fell by around 40 percent at times after the November IPO.