Organic foods are now available in almost all supermarkets and discount stores. With a market share of around six percent, they remain a niche product, but their share of total food industry sales has been increasing for years. Politically, too, the signs point to echoes: in the coalition agreement, the stoplight parties have formulated the goal of cultivating 30 percent of arable land organically by 2030. Consumers pay much more for organic products than for organic produce. conventional. You already know why: organic is healthier, tastes better and gives you the good feeling of doing something for the environment, the climate and animal welfare. But is that really the case?

Organic or rather conventional?

To summarize first: According to the current state of knowledge, organic foods are not healthier than conventional foods. Comparative studies show some differences. One of them: organic vegetables and fruits contain more antioxidants on average. These are substances with which the plant protects itself and that basically promote the health of the organism. “However, it is not clear whether we also have a health benefit from this additional antioxidant content,” says Professor Martin Smollich from the Institute for Nutritional Medicine at University Hospital Schleswig-Holstein.

38% of Germans often or exclusively bought organic products in 2021

An organic pig has 1.3 square meters of stall space. A fattening pig, on the other hand, measures only 0.75 square meters

Is organic better for the climate?

Even if there are no direct health differences, nutritionist Smollich points to indirect benefits of organic foods. For example, fewer antibiotics are used in organic animal farming, so fewer antibiotic-resistant germs develop that could be dangerous to humans. Impacts on the climate ultimately also affect our health. Man-made greenhouse gases are on the rise around the world, leading to more extreme weather conditions and heat-related deaths. In Germany, nine percent of emissions in 2020 can be traced back to agriculture. 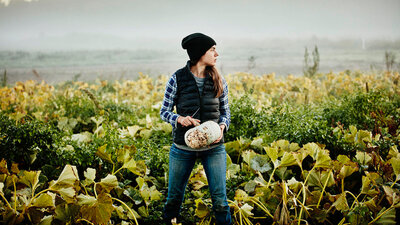 food for the climate

Global warming, empty seas, destabilized ecosystems: there is an urgent need to act, also regarding our nutrition

Calculated in terms of area, organic farming produces less greenhouse gases than conventional farming. Among other things, because mineral nitrogen fertilizers are not allowed. Its production consumes a lot of energy. In addition, organic fields release less nitrous oxide, which is about 300 times more damaging to the climate than carbon dioxide. In relation to performance, however, the calculation looks different:

For the same amount of grain, corn or vegetables, more land is needed in organic farming. Viewed this way, organic is not necessarily better for the climate.

But not only the climate is important for our survival, but also an intact environment. For our nutrition, we depend on insects that pollinate food plants. According to a general study by the Thünen Institute, more wild grasses grow in organic fields and there are more insects and birds. One reason: Synthetic chemical pesticides are banned in organic farming. Mineral nitrogen fertilizers are also taboo. This protects the soil and groundwater from excessive nitrate contamination. Also, for plants to get enough nitrogen, farmers grow so-called legumes, which capture nitrogen from the air. Clover, for example, is sown with grass and remains in the field for several years. “This means that birds can also find food in winter and insects can overwinter here,” says Dr. Karin Stein-Bachinger of the Leibniz Center for Agricultural Landscape Research.

And animal welfare in organic farming?

The express goal is for the animals to stay healthy, feel good and be able to perform their natural behavior. In fact, the animal husbandry requirements for organic farms are more stringent than for conventional ones. For comparison: According to the legal minimum requirement, a fattening pig weighing 100 kilograms must have 0.75 square meters of stall space, but no room to run. An organic pig has 1.3 square meters of stall space and one square meter of exercise area.

Certain painful interventions are prohibited in organic animal husbandry: pigs’ tails, for example, cannot be routinely docked, and roosters’ beaks cannot be trimmed. But is that enough? In the Thünen Institute study, the researchers also took a closer look at animal welfare. Dr Solveig March, one of the authors, sums up: “Organic animals are not necessarily healthier, but they do better overall.”

The bottom line remains: organic is a good start. But the choice of food must also be successful. At the beginning of 2019, an international group of researchers presented a menu that protects the health of people and the planet alike: the “Planetary Health Diet”. Meat consumption would have to be reduced by about half compared to today: there would be more vegetables and fruits, legumes and nuts on the menu.

You can find more information on the subject on the Internet at www.oekolandbau.de 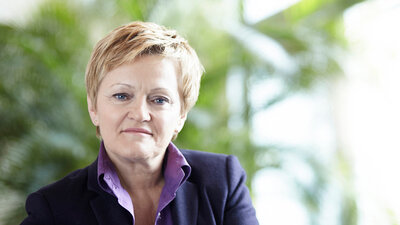 “It can’t just be about profit”

Renate Künast negotiated the coalition agreement in the field of nutrition for the Greens. What does the traffic light do for a better diet? 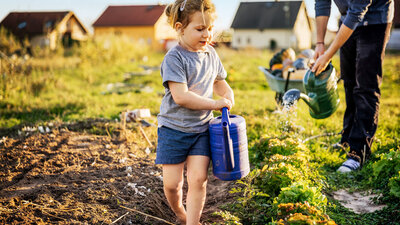 It is better for families who want to eat sustainably to buy food locally and regionally. Experts explain why. And parents talk about their special ways of shopping for groceries. 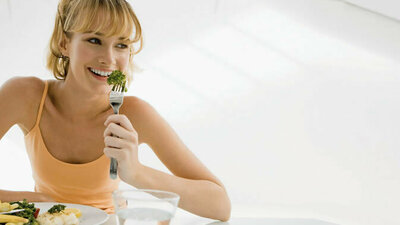 Nutrition: the basis for a healthy life