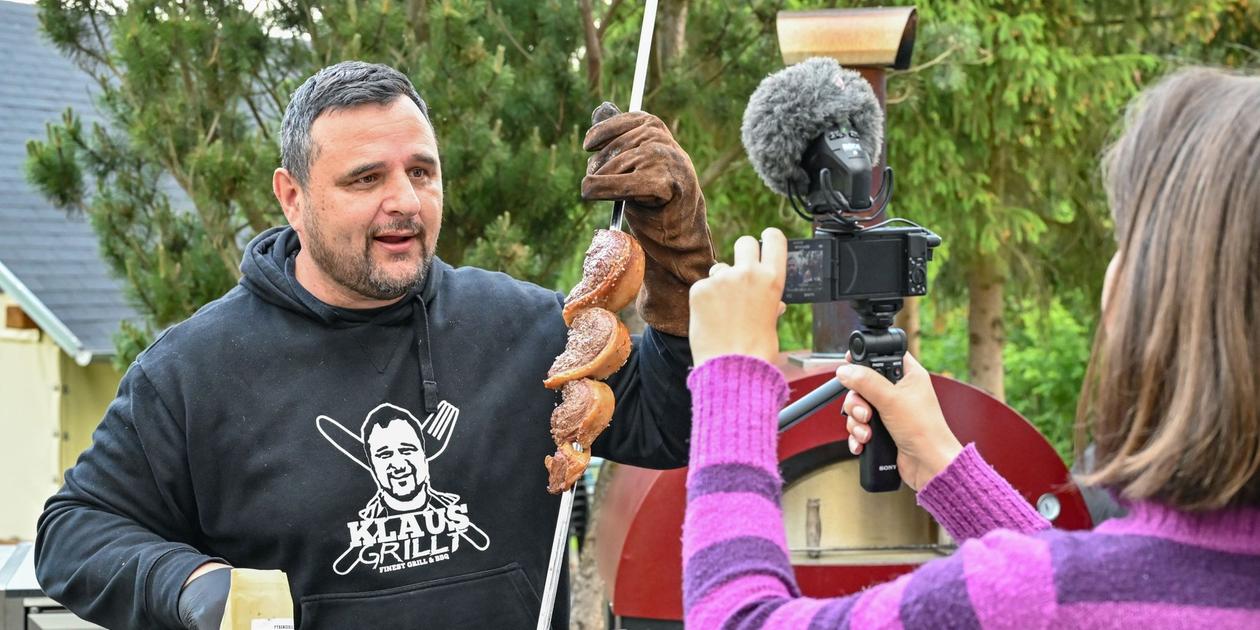 – “Anything is possible on the grill if you really want it,” says Klaus Glaetzner. The Grillfluencer shows what he means by YouTube videos. Grilling has become something of a national sport, not least due to the pandemic.

Klaus Glaetzner routinely holds up a large piece of boiled steak. “It’s also delicious, without horseradish sauce, but on a skewer, as Brazilians traditionally do,” says the 46-year-old, looking at the video camera his wife is operating.

“Let the charcoal glow nicely and put sprigs of fresh rosemary on the coals for a special aroma,” the Grillfluencer from Brandenburg advises viewers.

After all, Glaetzner has 440,000 subscribers on his YouTube channel, adding three new videos to it every week. The trained wholesaler from Hohenwutzen (Märkisch-Oderland) is one of the most successful barbecue specialists in Germany, confirms Oliver Sievers, President of the German Barbecue Association (GBA). “Klaus does it very well, with a lot of passion and the fans love what he does,” he says.

Glaetzner speaks to the camera in extensive Brandenburg jargon, as if the supporters were his best friends. He doesn’t take himself too seriously, because “Barbecuing should be fun” is his creed. Apparently that works.

Seven years ago, with the help of his wife, the father of the family published the first grill video on the Internet: “Chicken in a beer can”, prepared on a gas grill. “Of course he was hoping this would get attention,” says the passionate griller, who was still working for a staffing service provider at the time. However, he himself did not expect to be so successful and be able to resign from his current job in 2016.

Glaetzner, who also writes cookbooks, believes “diligence and luck” got him this far. His new professional life is one of hard work. “The videos should be structured in such a way that new grillers can easily repeat the recipes.”

He doesn’t seem to run out of ideas. After all, there are already 1300 videos of “Klaus-grillt”. On his now about 20 different grills, Glaetzner prepares dishes that laymen would never associate with grills or skewers: doughnuts, Chinese skillets, fire-roasted meatloaf or even lasagna.

The Dutch oven, a three-legged pot made of cast iron, is suitable for casseroles and casseroles, the American barbecue grill takes time and is not for the “quick hunger”, and a hybrid with gas and charcoal fire is worth it for meat on a skewer, explains the Youtuber, who himself developed a hemispherical fire plate grill. Of course, Glaetzners also has the classic charcoal grill, but with a diameter of 150 centimeters. “You can feed 100 people at a time with this.”

Grilling isn’t rocket science, but it’s one of the best hobbies of all, says steak sommelier Stefan Ulbricht, a professor at the Butcher’s Training Center in Augsburg. Courses are offered there to become a “certified grill master”. “As soon as the grill, whatever it is, has a lid, it works like the home oven, only with more aromas,” explains Ulbricht. Therefore, the preparation of dishes on an open fire plays a role in all the courses offered at the training center.

Glaetzner is keen to experiment and has helped publicize the diversity of barbecue, says the speaker.

Meatless food has a hard time on the grill

The cult steakhouse from Brandenburg has also featured vegetarian recipes such as “Burning Melon” or avocado with sauce on its YouTube channel. “But nobody looks at them,” says the man from Hohenwutzen, for whom meatless food is not an option, by his own admission. GBA can’t ignore the vegan trend either, says President Sievers.

“We have already successfully organized a vegan barbecue championship this year.” According to him, the regular German barbecue championship will take place on August 6 and 7 in Fulda (Hesse) with up to 50 teams. “There we want to show that the best grills are not machines to destroy meat, but that we can conjure up entire dishes on the grill.”

Glaetzner prefers to remain a lone fighter. His advice for a good Bruzzel experience: “Stay on the grill, check the core temperature regularly with a penetration thermometer, and don’t take everything too seriously, because undercooked usually tastes better than welldone.” 96 percent of his followers are men. “Fire, technology and sociability: that’s more what men are looking for,” he believes.

Corona has the grillboom fortified

The Corona period has increased the interest in the grill. “Restaurants were closed for weeks,” Glaetzner explained. People couldn’t have gone on vacation, but they could at least have gathered outdoors, adds GBA president Sievers. “So they put their money elsewhere and made barbecue a popular sport. There’s still a lot of money to be made on this team in the next five to 10 years,” he estimates.