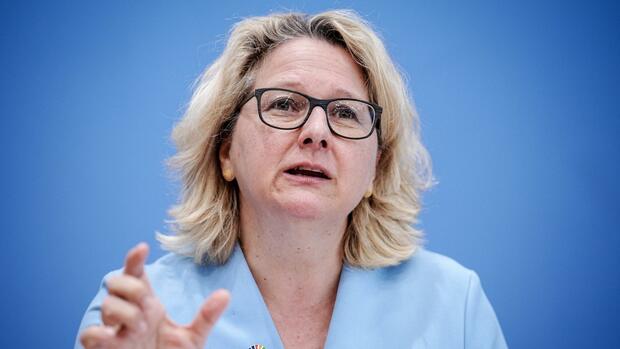 On a trip to Lebanon and Ethiopia, she got an idea of ​​the dramatic situation there, and Handelsblatt accompanied her. On the return flight, the minister reported on her plans to avert impending world famine.

On the one hand, the minister is planning a world alliance to prevent world famine. On the other hand, Schulze wants to reduce the production of biofuels in particular and use the area that has been freed up for food production. “The plate is more important than the tank,” Schulze said. “Biofuel must be obtained from waste, not from food.”

He also called on Europe to reconsider its trade model with the African continent. The approach of buying raw materials as cheaply as possible and processing them further “is not convenient.” But developing countries themselves must also work to wean themselves off their dependence on food imports and start producing more of their own.

Helping developing countries become less dependent on the world grain market also has a geopolitical component. After all, Moscow and Beijing controlled most of the global supplies. “Putin uses hunger as a weapon, unfortunately he has no scruples. We have to counter this with a food security policy,” Schulze said.

Mrs. Schulze, you have just arrived from Ethiopia and Lebanon, where you got an idea of ​​the local nutritional problems. What is your assessment, we are facing a global crisis? I am afraid we are facing a serious hunger crisis. Many factors are coming together right now: climate change with droughts and heavy rains, the extinction of species, the pandemic. All this together had already led to record food prices. Now comes Russia’s war against Ukraine, in the breadbasket of the world. Food stocks can no longer be delivered, so prices continue to rise. It is the poorest who suffer the most. In some African countries, people have to spend 80 percent of their income on food. If food becomes more expensive, they quickly starve.

Does that mean, however, that we are currently facing a distribution problem?

In the short term, it’s about getting existing stocks to the people. That is why it is so important that no export restrictions are imposed and that agricultural products remain exempt from Russian sanctions. And it is crucial that aid organizations like the World Food Program have the money to buy and distribute food.

And in the medium term?
In the medium term, there is also the question of quantity, depending on how high the crop yields are. In Ukraine now it will not be possible to plant as much as in previous years. Russia openly threatens to hand over only to so-called friendly states, a terrible blackmail tactic. On the African continent, in Ethiopia, for example, droughts and locust plagues cause massive crop losses. All of these effects just come together.

Can we in Germany and Europe try to balance these effects? Through more cultivation, for example?
It would be a big mistake to destroy the few natural areas that still exist in the German agricultural landscape. Some are currently trying to roll back all the progress made in environmental and agricultural policy for greater biodiversity. That would only create more problems in the long run. But Germany also has other levers: Nine percent of the world’s grain production ends up in the tank as biofuel. In Germany alone, five percent of arable land is used for biofuel production. If we manage to gain these areas for food production step by step, it would be a gain for food security. The dish is more important than the tank. Biofuel must be obtained from waste, not from food.

What can developing countries themselves do?
We must ensure that more self-sufficient plants are planted in countries that are highly dependent on imports. In North Africa, for example, the import share is sometimes 80 percent.

How did this strong dependence arise?
Many countries have focused on other problems because there was enough grain on the markets. Now we see what the consequences are. This crisis overlap is already a big challenge for us; the challenge is even greater for emerging and developing countries.

Does this mean that world trade will shrink and each country will once again focus primarily on supplying its own population?
That is not my goal. It is important to create more sustainable and diverse supply chains so that the entire supply does not collapse as soon as a single supplier disappears. Such dependencies are dangerous. The countries of the African continent or the Middle East must be more self-sufficient in food supply.

Don’t we also have to question the current trade model with developing countries in Europe?
This war against Ukraine marks a turning point in many ways. I think that the previous model of globalization must also be questioned. The approach of buying raw materials as cheap as possible and processing them here is not effective; after all, we want these countries to have fair prospects and real opportunities for development. We also just discussed this at the World Bank conference: we have to create a globalization of sustainability.

Do you see an opportunity in the current crisis to advance exactly that?
I find it very difficult to talk about this crisis as an opportunity. It is important to prevent what we can still prevent: for example, that we do not fall uncontrollably into a famine that is unbalancing many societies around the world. This is why I also proposed an alliance for global food security, which should coordinate existing relief efforts.

Do you already have concrete commitments for your alliance?
It is designed as an open alliance, already supported by the G7 countries. The World Bank and the African Union have now made suggestions for further development. No new bureaucracies should be created, but I am fighting for a nimble alliance with different focal points. We need many states as donors. Foundations and private companies are also invited. As Federal Chancellor Olaf Scholz announced, Germany will contribute 430 million euros to lay the first foundations for greater food security worldwide.

However, the World Food Program assumes that it will need around €20 billion this year due to rising food prices and an increase in the number of people in need. Such sums are just a drop in the bucket…
Exactly, that’s why we in this alliance have to keep our attention on the subject high. Because in such a fast-paced world, it is very difficult to obtain the money necessary to combat hunger in the long term. We have to stay on the ball. One-time payments are not enough.

In addition to the heavy dependence on imports, another problem is the high level of debt, especially in African countries. Does that mean that German money for development cooperation ends up being used to pay off these debts?
We make sure that the help actually reaches those affected. But the debt crisis is really a problem. Because on net, states have to pay more in debt service than they receive in support from us, this means that these societies are not moving forward. We must be very careful that the debt is not socialized, that is, that it is taken by the State, and that the benefits go to private creditors.

Do you see a haircut as a solution for these states?
The debt situation is very different. In many developing countries, China is now the largest creditor, in some private creditors play an important role. Chad, for example, is 40 percent indebted to a single resource company. So we need a debt restructuring that involves all stakeholders. There is a framework for this, but it does not work automatically and depends on the cooperation of China in particular. More effective implementation of existing mechanisms and accompanying measures is needed, for example, to better engage private creditors.

Keyword China: According to estimates, the country is currently storing around half of the world’s available grain. Shouldn’t the Chinese be won over to the alliance as well?
China also stores for its own population because there have been huge crop losses there too. But we must not stop exports, because then prices will continue to rise. That is why we will also try to win China over to our alliance.

Does the issue of food security then also have a geopolitical component to make countries less dependent on Beijing and Moscow, which currently control the world grain market?
Definitely yes. Putin deliberately uses hunger as a weapon, unfortunately he has no qualms about it. We must counter this with a food safety policy. As Minister for Development, I see what it takes for developing countries to grow their own food and stop relying so heavily on imports. If that succeeds, then that will also be a security policy gain.

Back to Germany again. During coalition negotiations, there was talk of abolishing the development ministry and the budget was initially cut. After this devaluation, is your apartment being revalued again with the current crisis?
This coalition decided on a strong and independent development ministry for good reasons. It has been abolished in Britain and of course that has consequences for international visibility. The British have left a vacuum that needs to be filled. At the World Bank meeting in Washington last week, calls were made for Germany to play a leadership role. In addition to the people of Ukraine, the war affects the poorest of the poor around the world. If we don’t react, the consequences will hit us very hard. In this sense, German development cooperation is particularly important today.

Plus: War in Ukraine pushes food prices to record highs