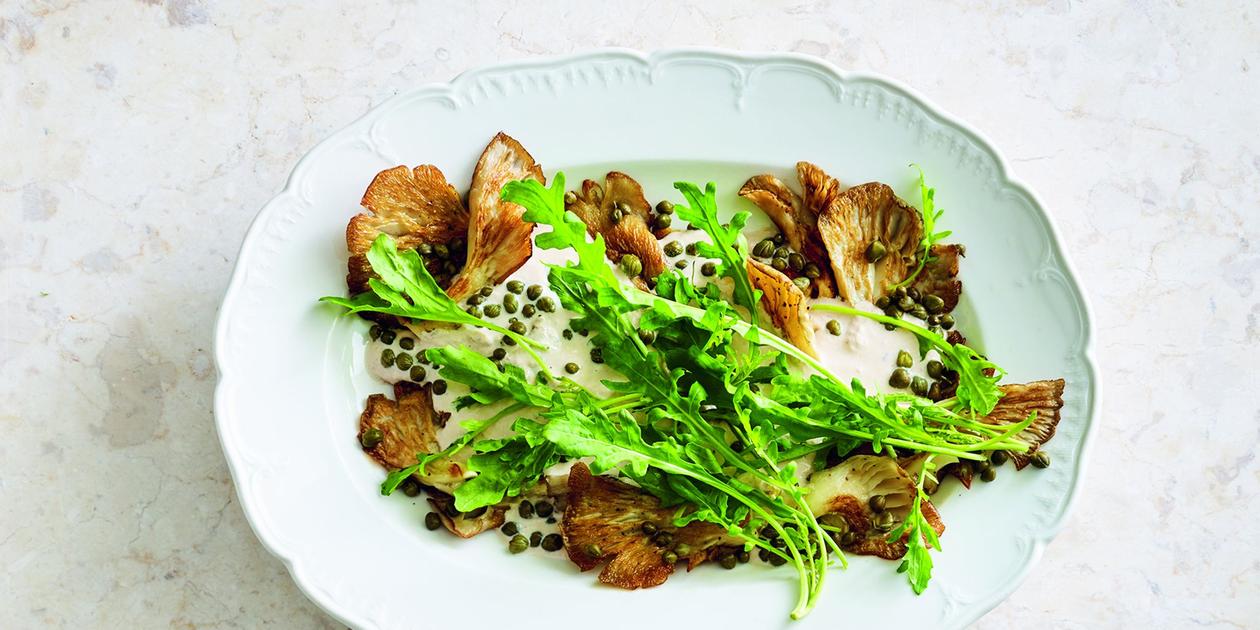 – It should not fill you up, but make you want more. If it’s easy to handle and still arouses enthusiasm, it’s perfect: the aperitif with a “wow” effect.

For cookbook author Angelika Ilies, one thing is very important when it comes to appetizers: “They have to be quick and easy to prepare.” And ideally, it should also be well prepared rather than served “on time”: “That can be difficult when guests are already there and it overwhelms most hosts.”

In her book “Antipasti & Tapas”, the gastronomic journalist has brought together Mediterranean delicacies that are not only suitable for social parties with various variants. Also served individually and in a small and fine frame, they make a difference.

If you don’t want to eat meat, Angelika Ilies recommends the “Oyster Mushroom Tonnato”. As with Vitello Tonnato, the sauce consists of tuna, but it is not poured over veal but over fried mushrooms.

In any case, use tuna (150g) in its own juice and don’t skimp. “Absolutely cheap tuna variants have a pungent taste,” says Ilies. He drains the tuna, puts it in a tall bowl and mixes it with 100 g of sour cream. Then add 1 tablespoon of lemon juice and season with salt and pepper. Next, wash 20g of arugula, shake to dry and chop coarsely. Leave the young leaves whole.

Now clean 250 g of oyster mushrooms, rub with a damp cloth and cut into thick slices if necessary. Fry in 2 tablespoons of olive oil in a skillet over high heat for about four minutes. Turn from time to time and season with salt and pepper. Finally, spread the mushrooms out on a plate, drizzle with tuna sauce, and spread 3 tablespoons baby capers (from the jar) on top. Finally sprinkle the arugula on top.

With turrets: crostini with salsiccia skewers

Ilies’ second tip: “Crostini with Salsiccia”. “I find them super easy and also suitable for ‘wow’!” For four people, two salsiccia sausages are each cut into four slices (approx. 2 cm thick) and fried in a pan for ten minutes until crispy on the outside and cooked through on the inside. Place on a plate and cover to keep warm.

Then fry four small eggs in fried eggs and place them on slices of ciabatta bread. Put two pieces of sausage on a 15 cm long wooden skewer and stick them on a loaf of bread. Finally, decorate the crostini with chives.

If you have the time and inclination, you can of course bake the ciabatta bread yourself instead of using it fresh or as a pre-baked version.

And what should be taken into account with the following main dishes? “Nothing really,” says Angelika Ilies. “Anything that tastes good is allowed. Like everywhere, there are no strict requirements here anymore.” However, you would make sure, especially when you have guests over, that the dishes somehow fit together geographically and that one style is present throughout the menu. In other words: no Wiener Schnitzel after Spanish tapas. However, the most important thing about the starter is “that it is not too rich”, says Angelika Ilies. “Most of all, it should make you want more.”

Tips from recipe developer and food blogger Marita Koch (marita-koch.de/blog) certainly do the same. For example, an asparagus, ginger and coconut soup with coriander and lime oil and roasted cashews. To do this, peel 500 g of asparagus, cut the heads 4 cm long, cut the rest into 1.5 cm long pieces and blanch everything for three minutes in 900 ml of salted water until al dente. Remove the asparagus from the cooking water with a slotted spoon. Add the asparagus skins and simmer for 10 minutes, drain through a colander and collect the infusion.

Meanwhile, for the oil, mix together 1/4 teaspoon organic lime zest, 2 tablespoons lime juice, 2 tablespoons olive oil, and 4 chopped cilantro sprigs. For the roasted cashews, mix 1 teaspoon of lime juice with a little salt. Toast 40g cashews in a skillet over medium-high heat until lightly browned. Add the lime juice mixture and toast briefly until the cashews are dry again. Then put in a small bowl, mix with cayenne pepper and let cool.

For the soup, sauté 15g finely grated ginger and a finely minced clove of garlic in 1 tsp coconut oil for about 1 minute. Deglaze with the prepared asparagus broth. Add 200 ml of coconut milk and 1 teaspoon of powdered vegetable stock and bring to a boil. Blend 30g cornstarch with 4 tbsp cold water until smooth, stir into soup and simmer briefly. Add the asparagus heads and pieces and heat. Season to taste with salt and powdered vegetable stock. Portion the soup, drizzle with the coriander-lime oil and garnish with the coriander leaves. Add the cashews.

“Of course, the soup has a bit of a kick to it because of the coconut milk,” admits Marita Koch. But you don’t have to serve the starter in big, deep plates. “Especially when a soup is a bit richer, you can also serve it as a smaller portion in a cup of coffee!”

For those who want to serve up a special appetizer but want minimal work on it, he recommends his favorite padron pepper skewers. “A grilled appetizer that adds variety,” says the recipe developer. With their extraordinary appearance and sweet-sour taste, the small green peppers enrich not only every barbecue, but also summer multi-course menus: skewer 5 peppers per portion crosswise on a skewer, brush generously with frying oil and cook for 3- 4 minutes per side Grill over medium heat until skin blisters.

Then place the skewers on plates and sprinkle with coarse sea salt. Serve with baguette and lemon aioli. Mix 100 g of mayonnaise, 1 tablespoon of lemon juice, 1 clove of pressed garlic and a little chopped parsley.

“Of course, the peppers can also be served as a side dish as well as a starter,” says Marita Koch. “We especially like them as starters and they provoke an even greater surprise effect among the guests.”