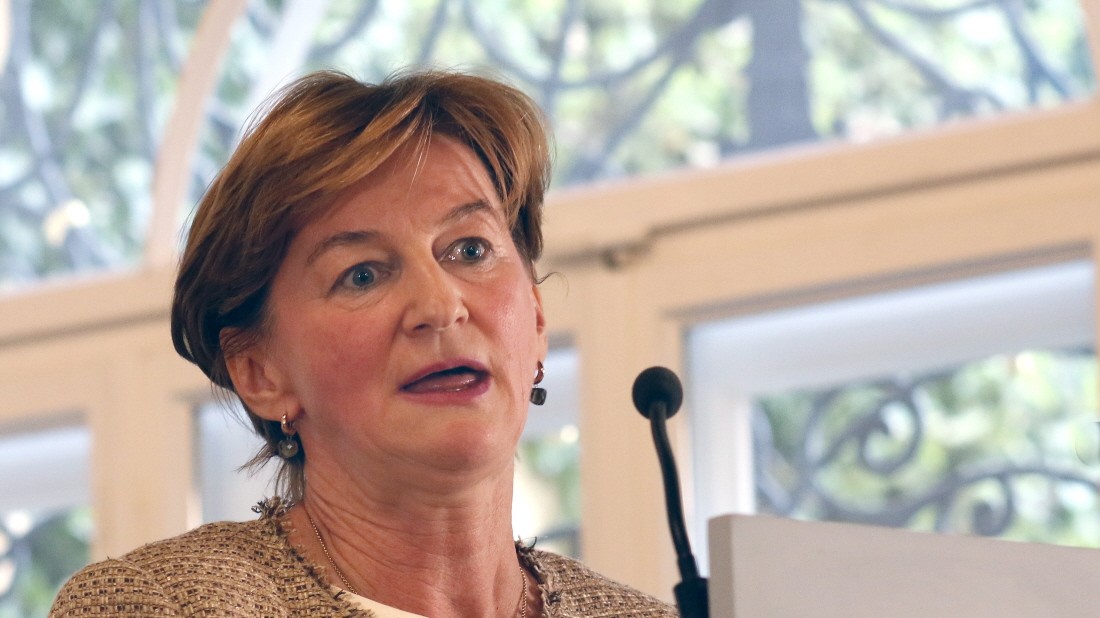 Huge laughter ripples through the room, and with the laughter comes relief. The Evangelical Academy and the Tutzing Rotary Club had under the title “What will we eat in 2050?” recently invited to the “Tutzinger Speech”. Barbara Scheitz, managing director of the organic dairy “Andechser Natur”, and Professor Jan Grossarth from the Biberach University of Applied Sciences are guests. A dispute was announced between the representative of organic agriculture and the scientist, and there was actually a lot of discussion, but then there was laughter.

For example, when a listener commented that he was eating Andechser Molkerei products every day, Grossarth radioed from the stage and said, “Me too.” Great cheer in the hall: Grossarth of all people, who had been giving complex answers to much more complex questions all night in a perfectly fitted suit and with a mischievous smile on his face, was suddenly revealed to be a fanatical farmer conventional organic. Perhaps Grossarth’s interjection should be taken as good news: the scientific approach cannot fully function without the agricultural one.

Grossarth, as a professor of bioeconomics and circular economy, appears tonight as an academic who publishes clever scientific anthologies, worked with Julia Klöckner at the Federal Ministry of Agriculture, and cleverly uses terms like “fermentation“ or “recycling“ juggles Scheitz, for his part, has brought a whole range of products from his Andechs cheese factory and acts as a representative of the practical perspective that wants to promote organic farming in the fields and meadows of the region with more than 650 organic farmers.

Now these two face off to discuss in front of some 80 listeners at the Evangelical Academy’s “thinking workshop” what will actually end up on humanity’s plates in 2050. “Three or four months ago this speech would have been given in a way much more scientific. Now the logic of war overshadows everything,” Grossarth said at the opening. The war in Ukraine also affects food policy. After all, the country is a major producer of wheat, which Vladimir Putin uses as a weapon, Grossarth analyzes. And so, looking at the current situation in the world, it becomes clear how unstable the nature of the forecasts is: “I am honored to speak about 2050. You might also ask what is actually happening in 2030 or even 2023.”

When words like this come out of the mouth of a scientist like Grossarth, it becomes clear how dire the situation is. However, he shows some perspectives for the future from his area, which are mainly related to the circular bioeconomy. The core of this theory is that all energy and material cycles are closed. For example, all waste would be recycled. This is called upcycling, a method that is now also possible in terms of price. “What I am saying may sound utopian. But much of it has very real foundations,” explains Grossarth.

Scheitz, on the other hand, takes a different, less technical approach. For her, the cycle of nature is perfect, as she says. Anyone who listens to the manager of Andechser Molkerei as she talks in flowery terms about her milk supplier, the cows, can hardly imagine that the future of nutrition could have anything to do with processed waste. “We experience current needs very closely, so we have a completely different perspective than science,” says Scheitz, who alludes to climate change in particular. She repeatedly promotes a concrete implementation of scientific ideas, as in her own concept of climate farmers. This means that one hundred of their contract partners implement the climate requirements directly in their operations with scientific support and receive financial compensation for each ton of CO2 saved or additionally bound. This needs to be actively addressed elsewhere as well, and Scheitz’s scientific way of thinking often doesn’t go far enough: “We are giants when it comes to knowledge, but dwarfed when it comes to implementation.”

Everything that is on the menu today will also be available in the future, says scientist Jan Grossarth

So what’s on humanity’s plate in 2050? Grossarth has a clear idea: “Everything that is on the menu today will still be on it in 2050.” Food cultures are stable, says the scientist, they are very much based on tradition and identity. It’s entirely possible, for example, that meat is produced differently, says Grossarth. Scheitz, for his part, is clear: “With the next generation, our menus will also change.” However, the path of change has not yet been charted: Scheitz gives little thought to current trends, such as the switch to soy or oat milk. Compared to cow’s milk, these substitutes lack important nutrients.

So, while the scientist primarily sees changes in food production, but not the type of food itself, the dairy owner predicts fundamental changes in menus. One thing should have become clear to many of the listeners by the end: It’s still pretty hard to predict what will actually end up on people’s plates in the end.

The Tutzinger Speech has been jointly organized by the Evangelische Akademie Tutzing and the Rotary Club Tutzing since 2011 and once a year deals with central themes of the “Human Future”. Other topics were, for example, the future of work, the economy or the media. The term “Tutzinger Speech” became popular through a keynote speech by Egon Bahr, who in 1963, as then chief of the Berlin Mayor Willy Brandt’s press office, proclaimed the change of strategy in reunification policy. of West Germany with “Change through rapprochement”.