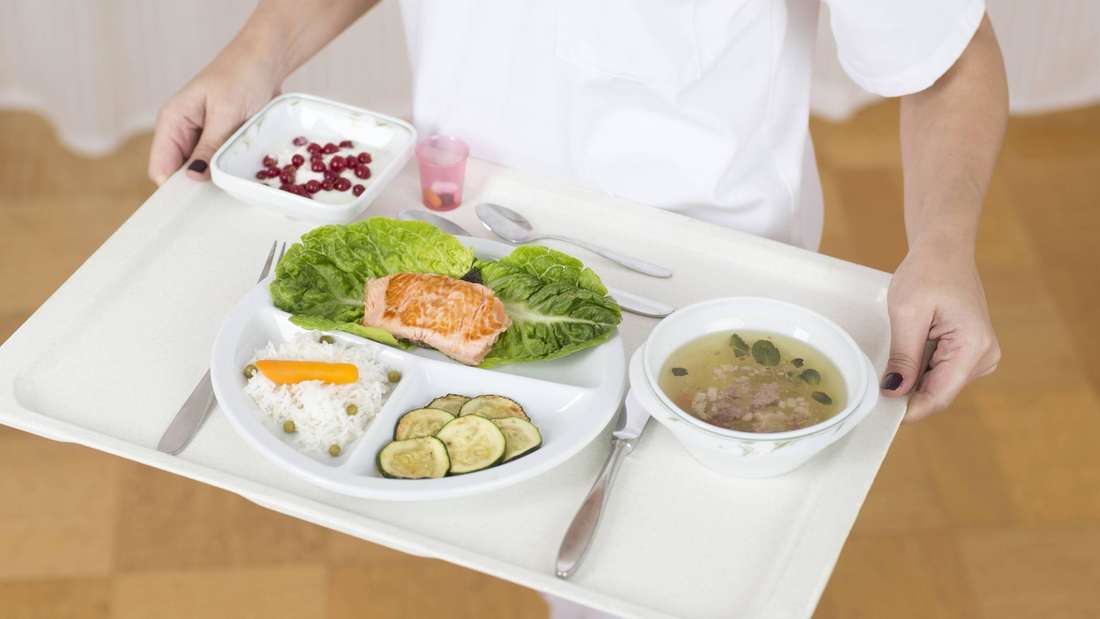 Many German clinics adhere to outdated guidelines for the nutrition of sick people. The consequences are malnutrition and preventable deaths. By Martin Rucker.

According to expert medical associations, cancer patients are exposed to unnecessary risks if they are given inadequate nutrition in hospitals. The warnings are becoming more urgent, but have so far gone unheeded in many institutions, a survey of German university hospitals shows.

The background is the discussion about the concept of “low germ food”. It has long been standard for patients undergoing chemotherapy or stem cell transplant: To protect immunosuppressed people from foodborne infections, fungal spores or bacteria such as salmonella should be avoided at all costs. Many clinics not only rely on prolonged heating, but also avoid foods with a higher risk, such as raw meat and vegetables, salads, fresh fruit, and sometimes tap water.

Every fourth patient is considered malnourished

But well-intentioned is not necessarily good. Recently, science has moved further and further away from the concept. Large studies found no evidence of a reduced risk of infection compared to regular hospital food. “Anyone who still relies on low-germ nutrition is moving into the field of alternative medicine,” says Jutta Hübner, who heads the working group on prevention and integrative medicine in oncology at the German Cancer Society (DKG). What’s more: according to experts, unattended food is even harmful.

In the meantime, the DKG, together with the German Society for Hematology and Medical Oncology, the Association of Dieticians and the Professional Association for Ecotrophology, urgently warn against adherence to a sterile diet, as this “brings no advantages, but considerable risks.” ” for cancer patients – according to a statement – there is talk of a “substantial shortage” of those affected. The German Society for Nutritional Medicine also heeded the warning.

In clinics, one in four patients is considered malnourished, meaning not necessarily underweight, but critically under-supply of important nutrients such as protein, vitamins and minerals. In cancer medicine, the proportion is even higher.

Years ago, American oncologist Declan Walsh complained that malnutrition was the “elephant in the room.” Everyone sees that it is there, but no one really cares about it. The far-reaching consequences have been well studied: malnourished patients stay in hospital longer than those who are normally fed, have to deal with more complications, and are at higher risk of dying. For up to 20 percent of tumor patients who die, the cause of death is not cancer but malnutrition.

With this knowledge, not eating a lot of nutritious and tasty food can be a boomerang because it further promotes malnutrition. This is how professional societies justify the widespread move away from low-germ foods. As early as 2021, the Robert Koch Institute’s Commission on Hospital Hygiene and Infection Prevention had warned that “such a diet significantly affects the quality of life of patients” . Particularly strict kitchen hygiene is the method of choice, but not a complete exemption. The European Society for Clinical Nutrition and Metabolism has also been advising against low-germ foods for months.

However, this knowledge has not yet reached many clinics in Germany, not even the sample hospitals of the universities that were asked about random samples. When asked, twelve of the 38 university hospitals in Germany did not provide any information on their nutritional management.

The Gießen-Marburg University Hospital refused to respond, even after intervention by the Hessian Ministry of Science. A spokesperson backed away from the position that, as the only privatized university clinic in the republic, there was no obligation to provide information under the press law.

about 25 percent the clinic’s patients are malnourished. Cancer patients are further affected by an insufficient supply of important nutrients, up to 60 percent in some hospital wards.

about 20 percent of deceased tumor patients, the cause of death was not cancer, but the consequences of malnutrition.

About 70 to 80 percent of all diseases” have a nutritional background or should be treated with nutritional therapy, according to the nutritional medical societies.

nutritional therapy and catering tailored to individual needs saves lives, as a large study with around 2,000 seriously ill patients in eight Swiss clinics between 2014 and 2018 showed: after 30 days, the dietary requirements had reduced the patient’s risk of serious complications in 21 percent, the risk of death even 35 percent compared to patients who received ordinary hospital meals.

Since 2011 There is a quality standard for hospital catering developed by the German Nutrition Society (DGE). How widespread it is is unknown: only a good four percent of hospitals have been certified by the DGE and have verified compliance with the standard. Mr

Of the 26 institutions that were willing to provide information, some also did not respond to questions. However, 17 of the 26 hospitals stated that they would continue to regularly give low-germ food to patients undergoing chemotherapy or stem cell therapy, including in Frankfurt.

Goethe University Hospital gives low-germ food to stem cell transplant patients and people with blood or tumor diseases if their blood cell counts fall below certain levels. This is critically seen in nutritional medicine. There is talk of “pseudo-scientific criteria” without evidence.

The list of foods that Frankfurt University Hospital omits for those affected is long: numerous types of cheese, raw fruits and vegetables that cannot be peeled, salads of leafy and raw vegetables, dried fruit, wholemeal bread, muesli mixes, raw cereal flakes, and dried herbs, nuts, chocolates, potato chips and much more are prohibited.

When asked by FR, a spokesperson explains that the practice is currently being reviewed: “We are aware of the current recommendations and therefore we are also striving to abandon the low-germ diet in oncology,” he opened.

Also, Frankfurt has a lot to do to catch up. Although the university hospital “in principle” examines all tumor patients for their nutritional status, there are no special “nutrition teams” for nutritional care of malnourished patients, as is also required by professional societies.

A large Swiss study with around 2,000 cases impressively demonstrated the effect of such measures. Published in The Lancet magazine in 2019, it showed that nutrition teams with a diet tailored to individual needs can improve the chances of recovery of the sick, reduce the time they suffer and increase their chances of survival.

The study participants had come to the clinic with cancer and other serious illnesses and also showed signs of malnutrition. While half received the usual hospital food, the dieticians adapted the diet to the needs of a second group.

After 30 days, people who received nutrition therapy had a 21% lower risk of serious complications and a 35% lower risk of death compared to those who received only standard hospital meals. In 2021, the US National Agency for Healthcare Research and Quality confirmed in a review the positive effects of such nutritional therapy on clinical outcomes.

In Germany, the German Nutrition Society (DGE) tried in 2019 to bring the issue of malnutrition in hospitals into public discussion. This is a “relevant health problem” with “serious consequences,” he warned, noting that most malnourished patients in clinics are not even recognized, let alone cared for by dieticians or nutrition teams.

According to estimates, there are teams of this type in at most one in ten hospitals in Germany, and the number of positions for dieticians has been declining for years. Despite all the warnings, the issue does not enter the political agenda. The stoplight alliance coalition agreement does not address it at all.

In 2003 this was different. The Council of Europe, with the participation of the German federal government, passed a resolution calling the number of malnourished hospitalized patients “unacceptable.” It included a long list of highly recommended courses of action. What has happened since then? The Federal Ministry of Health “has no knowledge” about it.