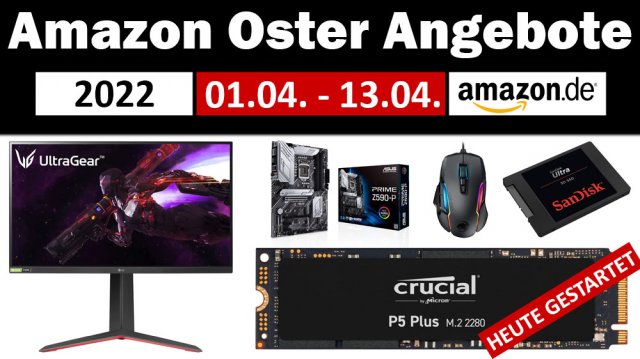 Amazon Easter deals have been running since midnight today and now we have a good overview of the best deals. A lot up front: If you’re looking for Amazon products like the Fire TV Stick 4K, you’re still going to be disappointed right now, but the Easter deals will last until April 13, so there’s a good chance there will be deals on Amazon products . later will follow. Some SSD deals from Samsung, WD, and Crucial are certainly exciting. Many Asus motherboards are also cheaper. If you have a Nintendo Switch console, you should also take a look at the offers. Unfortunately, if you want to buy a PS5, you won’t find any deals right now.

Amazon hosts sale events several times a year. Whether it’s Prime Day or Black Friday, there are often unbeatable deals on Amazon. Today is the starting gun for Amazon’s Easter deals. From April 1 to 13, 2022 there are many interesting discounts and offers. As usual with Prime Day or Black Friday, you can choose between “deals of the day,” which are available for 24 hours and deals that only end on April 13 or disappear from the Amazon Easter deals page once these sell out. products. Lightning deals are also available starting at 6 am and last up to 12 hours. Flash deals, of course, can sell out quickly, and Prime customers have a head start here, as they can grab Amazon Easter flash deals 30 minutes early.

With the incredible number of Amazon Easter deals, it’s hard for us to keep track. We’ve updated the Best Deals list and moved it to the top so you don’t miss any changes. Whether it’s SSDs, monitors, or gaming keyboards, there should be something for everyone.

The highlight of Black Friday and Co. is always the Amazon warehouse deals. Amazon Warehouse listings are Amazon items that customers ordered and opened and returned to Amazon within the return period. Plus, with Amazon Easter deals, there’s a nice extra 20 percent off on products that are already on sale anyway. The discount will be automatically deducted at checkout and is only valid until April 13 at 11:59 p.m. Since these are always unique, it doesn’t make much sense to name specific products here. But just take a look at the various categories like Computers & Accessories, Electronics & Photography, and Video Games. By the way, you also have the full guarantee with Amazon warehouse offers and you can simply return the products if you don’t like them.

Retailers like MediaMarkt, Saturn and Müller repeatedly had Playstation 5 contingents this year. This has been different on Amazon so far. The PS5 was no longer available for purchase for over two months. The one exception was this week when a Horizon: Forbidden West bundle was offered. However, so far there has been no trace of the bare console. So we are very curious to see if the Playstation 5 Disc Edition or Playstation 5 Digital Edition will be available again during the Amazon Easter sales.