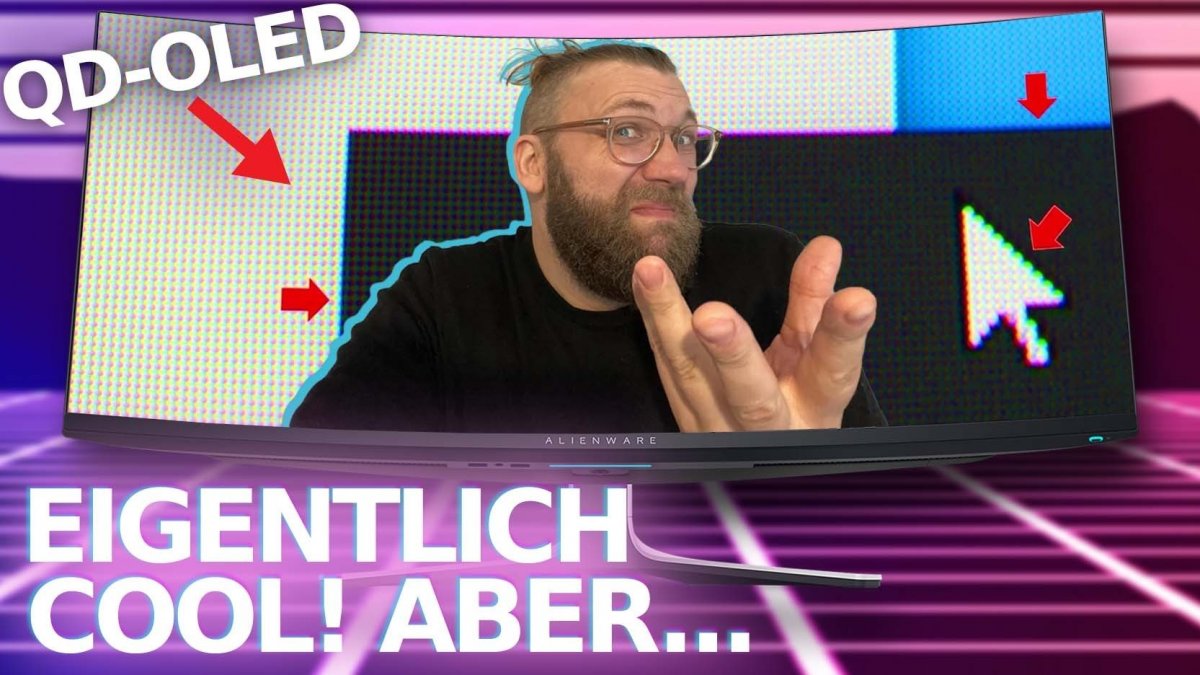 The Alienware AW3423DW is an affordable ultrawide curved 175Hz OLED monitor with G-Sync. Sounds good? Yes, if it weren’t for the brand with the font display…

Look what I have here: the Alienware AW3423DW OLED Gaming Monitor, with all the bells and whistles: HDR True Black 400, G-Sync Ultra; 175 Hertz, switching times of 1.4 milliseconds on average and, of course, OLED picture quality, ie REAL black and virtually no viewing angle dependency. And yet my colleagues at c’t and heise write this online: The panel in its current form is a fundamentally messy affair. I beg your pardon? Stay tuned.

I’m a huge OLED fan: I have a 65-inch OLED in my living room; I also prefer to buy smartphones with OLED, I just don’t like it when black looks so milky greyish.

Well, but OLED PC monitors, that used to be a thing. Here, if you go to monitors in the Heise price comparison and then click on OLED technology: there you can find only five devices, and three of them cost more than 2,500 euros. The Alienware model, which is the subject of this video, costs a comparatively cheap 1,300 euros. That’s the price range you should pay for a good ultrawide screen with LCD technology, but you don’t get all the OLED benefits like deep black.

One of the reasons OLED has always been a problem on PC is burn-in: OLED tends to show ghost images when items have been on the screen for a long time. This isn’t as relevant to TVs, because normally nothing stays in the same place for very long apart from something like channel logos. But on PC, items are usually permanently in the same place, for example, the taskbar. The Alienware monitor should no longer have the problem, because it uses the new QD-OLED technology from panel manufacturer Samsung.

Of course, we tested it to see if that was really the case, but first my first impressions: when the monitor was on my desk, the first thing I noticed was, you probably don’t understand, the Windows 11 wallpapers. Yes, honestly , look how good that image of stacked tiles looks. And how stupid the calculator looks in full screen hahaha. No seriously, you shouldn’t maximize windows when working on it, but use the windows auto-fit feature and then it works great; the thing definitely replaces a dual monitor setup. Almost four DIN A4 pages fit side by side in full size, that’s really great. And of course the games are really great, while first person titles like Cyberpunk 2077 really pull you in, I also found older games like Anno 1404 very impressive.

And if the games support HDR, that’s great too, like Cyberpunkt 2077, here the neon sign here really dazzles. The monitor masters the HDR True Black 400 standard, so you can have 400 nits of brightness in small image areas. We even measured 460 nits with 10 percent white space, which is really good. With solid white it was 250 nits.

I also liked the controls, instead of annoying buttons, here you do everything with a joystick, it works well. I found color tricks with RGB LEDs quite amusing, but hey, if you think it’s cool, by all means, why not? But of course you can turn it off.

Personally, the biggest difference for me aside from deep black is the refresh rate: 175 Hertz creates the part, and even if I wouldn’t guarantee you’d know the difference between 120 and 175 Hertz right away, the 60 Hertz jump is definitely HUGE. And that, by the way, also during normal work, not only in games. To me, the scrolling in the browser, the movement of the mouse cursor, seems much smoother; that the change to 60 Hz was really uncomfortable for me. And thanks to G-Sync, the image is not broken either, if the graphics card only handles 80fps when gaming, for example, then the monitor adjusts to that; and it can also HDR at the same time, that means the G-Sync Ultimate label, G-Sync without Ultimate doesn’t do HDR: So everything is great with the Alienware monitor? Unfortunately not: the piece shows colorful high-contrast edges, colorful to the extent that there is actually no color at all. Here, for example, the mouse arrow, which should actually be white. It looks greenish at the top right and heads towards purple at the bottom. You can also see it with the X here and in general with the text display.

The reason for this is the pixel arrangement: instead of placing the sub-pixels for red, blue, and green in a row, panel maker Samsung arranges the sub-pixels in a triangle on QD OLED screens. As a result, every second row of subpixels can only display green, and the other rows lack the green component. The problem is somewhat reminiscent of Samsung’s AMOLED screens in smartphones, where sub-pixels were unevenly arranged on a so-called pen-tile array. LCD screens have pixels evenly arranged in rows, so these problems don’t arise.

Well, and with the Alienware monitor, this coloring had some colleagues throwing their hands up as soon as they turned it on, and actually when it turned on, that is, with the first message that the monitor shows on its screen. . Of course, this also makes it clear that this is not a software problem, but is really due to the hardware.

However, how bad you find it varies from person to person. In the c’t newsroom, the proportion was fifty percent: half found it super annoying, the other half not so much. I’m more than half who don’t think it’s that bad. To be honest, I hardly see it with black writing on a white background, and a little with white writing on a black background. But I have to say: if he hadn’t consciously paid attention to it, he wouldn’t have noticed. That’s why it’s a bit unfair that it’s sometimes said on the internet that all other media testers that don’t mention brightly colored borders are paid for by the manufacturer. I highly doubt it, they probably just didn’t let enough people look at it, and they just happened to be testers who didn’t react as strongly to the color fringes as I did. But it is definitely a problem, because those who notice it notice it immediately; and they can’t work on the monitor. Therefore, I would definitely recommend you to take a look at the device beforehand.

Yeah, it’s really a shame about the color fringing, because otherwise the monitor performed very well in the c’t test lab: the demanding DCI-P3 color space is almost exactly covered, the viewing angle stability is excellent, so the monitor also shows when viewed from the side almost no color changes. Contrast is mathematically infinite because black is actually OFF.

And burn-in is no longer an issue: while I can remember TVs in the early days of OLED where an hour with a still image was enough to see burned-in shadows, we found nothing of the sort with Alienware. . As a test, I left this image here at full brightness for 12 hours; then nothing was visible. And if it did, it wouldn’t be too bad either, because Alienware (or Dell, they’re behind the brand) offer a three-year warranty on any burnout. The reason for the significantly lower burn-in risk is the panel technology – and Ulrike will now explain it to you.

However, what I did notice after running it for 12 hours was that the monitor fan was really annoying. Yes, you heard right, this thing has an active fan. Most of the time we couldn’t perceive it at all, but in some situations it was very clear. It would be interesting what happens in the middle of summer at 30 degrees of ambient temperature; You should also keep that in mind before buying it.

And while we’re on the negatives: the part is blatantly mirrored, it’s particularly noticeable because of the curvature; especially if you look at it from the side. Directly from the front is fine, but you shouldn’t have a light source behind you.

And the fourth and last negative point: the monitor consumes a comparatively large amount of electricity from the socket. We measured a maximum of 118 watts, with an ergonomic brightness of 120 cd per square meter it was still 45 watts. That’s more than twice what similar LC displays require in the same scenario.

But the monitor also does a lot of really great things: aside from the high-contrast color fringing at the edges, the image quality is pretty much the best you can get right now. That looks really cool. And the change times are absolutely fantastic too: it only takes a little over a millisecond for gray to gray changes no matter how hard I try, I can’t see any streaks even when super frantic in first person. games – and look.

My conclusion: If the color fringes, the fan that is heard from time to time and the high consumption do not bother you and you want and can spend 1300 euros on a monitor, then this is your screen. Personally, I found the thing really impressive when gaming and could get used to it when working; Most of all, I don’t want a 60 Hertz monitor anymore, it seems very choppy to me now. And I would also like to have the mega-black OLED every day. Tough: Let’s wait and see how QD-OLED tech continues, it definitely has potential.

c’t 3003 is c’t’s YouTube channel. The videos of c’t 3003 are independent content and independent of the articles of c’t magazin. Publisher Jan-Keno Janssen and video producers Johannes Börnsen and Şahin Erengil publish a video every week.