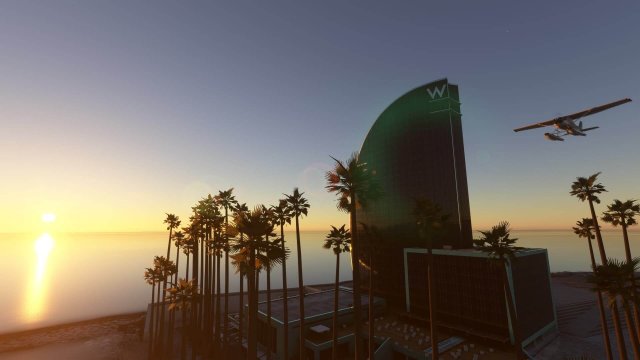 04/08/2022 at 17:41
from Thilo Bayer –
In the new Flight Simulator Developer Update, Microsoft and Asobo provide information on Sim Update 10 (plus) with DLSS and improved DX12. The problem: There is no release plan yet.

The beta version of the sim 9 update for the flight simulator is currently running. It’s supposed to take off on April 26, at least that was the original plan. Feedback from beta testers has already resulted in an improved build of the game and more updates to come. Sim Update 10 could be a lot more exciting.

Sim update 10: What is already known

In an updated overview, Microsoft and Asobo show which features are “actively” being developed. Among other things, DLSS is on the agenda for Sim Update 10. It is “almost ready and we are in the process of finalizing the implementation on PC.” Cloud layer improvements will also come with Simulator Update 10. He states: “We are adjusting the cloud layer system to be more accurate and incremental. The layer becomes much thinner at sea level and thicker at higher altitudes. The updated system will help better represent realistic cloud cover at low altitudes”.

For Sim-Update 10 (or later), among other things, Direct X 12 on PC is mentioned as “better”. So far there is only more or less rudimentary rendering support. In the next step there should be “improvements in stability, memory allocation and general optimization”. No more talk of ray tracing or other fancy features like direct storage. The implementation of the weather and terrain APIs is also on the agenda for SU10+.

The question remains when the technical improvements will arrive. Two world updates (9 and 10) and the Top Gun Maverick DLC movie are on the schedule for May and June. A Sim 10 update isn’t on the roadmap as of yet, so it shouldn’t appear until July at the earliest. And even then, with the SU10 Plus tag, it’s not clear when Direct X 12 will actually be developed. DX12 was first an issue in late 2020. Perhaps the developers have too many issues on the list, because in addition to updates to the world and simulator, DLC and multiplayer, helicopters and gliders are also on the program for the fourth quarter of 2022. Boredom looks different.

Skip to comments (one)