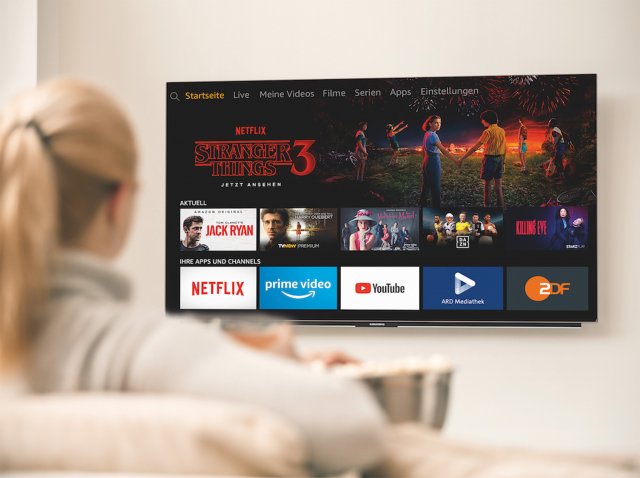 More than 150 million devices sold speak for themselves. We are talking about the Amazon Fire TV Stick. In addition to this streaming device, the world’s largest mail order company also offers tablets that allow access to streaming portals such as Prime Video, Netflix or Sky Ticket. Easter deals on Amazon last until April 13, where bargain hunters get their money’s worth. In order not to lose track, we summarized the best offers for readers.

This article is about deals on Amazon products. For example, there’s the current Amazon Fire HD 10 (11th Gen) Productivity Bundle which consists of a tablet + Bluetooth keyboard + Microsoft 365 one-time subscription for just around €215 instead of €270. If you’re looking for an e-book reader, you can save up to 35 percent on the Kindle Paperwhite when you buy a refurbished device for just €75.99 instead of €108. The Amazon Fire TV Stick 4K also offers savings potential, which is available for just €42.99 instead of €53.99, although this is also a refurbished device. The traditional Grundig brand is also offering new Smart TVs with built-in Fire TV Stick at a discount of up to 60 percent.

Grundig was founded in Fürth in 1930 and later moved to Nuremberg. After the insolvency, the Turkish group Arçelik Grundig took over and established its headquarters in Neu-Isenburg, where the group company Beko Deutschland GmbH is located. Now only the brand remains, the components are purchased on the Asian market. To set itself apart from the competition, Grundig installed Amazon Fire OS, which runs the same operating system on smart TVs as it does on an Amazon Fire TV Stick.

As PCGH’s daily test showed, the Fire HD 8 can be used as a replacement for an Echo Show. A special feature of the 10th-gen Fire HD8 and Plus model is built-in Echo Show mode, which turns the tablet into a portable touchscreen Alexa device. This show mode can be activated at any time through the notification center. You can then use skills for Amazon Alexa that have an image output, such as news.

With the current 11th generation of Fire HD 10, Amazon has decided to partner with Microsoft. A Bluetooth keyboard that includes a Microsoft 365 subscription is available for the 10-inch tablet. For only about 215 euros instead of almost 270 euros you get an Android tablet, which becomes a kind of substitute for the netbook. At least you can display two applications side by side in split screen mode and, thanks to the keyboard, easily reply to emails or write texts in Word.

What is the difference between the Fire HD and the Plus version?

Amazon offers both the small Fire HD 8 and the larger Fire HD 10, a regular version and a plus edition. If you pay the extra price, you get a soft-touch back and support for wireless charging according to the Qi standard with the Plus models. Additionally, the Plus models offer more RAM.

With the incredible number of Amazon Easter deals, it’s hard for us to keep track. But we have already selected the first offers that could be interesting for PCGH readers. Especially the SSD deals should also be exciting with the Easter deals, after there were always great deals with low prices on Prime Day and Black Friday.

Recommended Editorial ContentHere you will find external content from [PLATTFORM]. To protect your personal data, external integrations are only displayed if you confirm this by clicking “Load all external content”:

Asus ZenBook, OLED TV, Samsung Galaxy and much more. at super prices in the great sale of Saturn


A 65-inch Samsung Neo QLED TV and a 77-inch LG OLED TV are cheaper than ever at Saturn and MediaMarkt. #advertising

The highlight of Black Friday and Co. is always the Amazon warehouse deals. Amazon Warehouse listings are Amazon items that customers ordered and opened and returned to Amazon within the return period. Plus, with Amazon Easter deals, there’s a nice extra 20 percent off on products that are already on sale anyway. The discount will be automatically deducted at checkout and is only valid until April 13 at 23:59. Since these are always unique, it doesn’t make much sense to name specific products here. But just take a look at the various categories like Computers & Accessories, Electronics & Photography, and Video Games. By the way, you also have the full guarantee with the Amazon warehouse offers and you can simply return the products if you don’t like them.